http://vixra.org/pdf/1409.0072v2.pdf General Relativity.
1
General Relativity: In Acknowledgement
Of Professor Gerardus ‘t Hooft, Nobel Laureate
Stephen J. Crothers
Queensland, Australia
steve@plasmaresources.com
4
th
August 2014
Table of contents
I got my own way, to go,
And now I want,
To take your minds;
I, believe, if you could see,
The blood between the lines,
I, believe, that you could be,
A better kind;
Please lead the way so the unborn can play,
On some greener hill;
Laugh as the flames eat their burning remains,
Fools die laughing still.
1
1
‘
Fools
’, Deep Purple, Fireball, 1971, (Gillan, I.,
Glover, R., Lord, J., Blackmore, R., Paice, I.)
I. Introduction
Gerardus ‘t Hooft is a Dutch professor of
physics at the University of Utrecht in the
Netherlands. He is a winner of the Nobel
Prize for physics. He is currently, and for
some years has been, the Editor in Chief of
the journal
Foundations of Physics
. He has
kindly brought attention to my writings on
black holes, big bang cosmology, and General
Relativity, on his personal website. I’m
honoured that Professor ‘t Hooft has taken
the time and trouble to inform people of my
research proving the falsity of black hole
theory, big bang cosmology, and Einstein’s
General Theory of Relativity.
Although he www.sjcrothers.plasmaresources.com/index.html
2
comments on the works of five particular
scientists, he has allocated perhaps the most
of his comments to me.
Mr. ‘t Hooft [1] refers cryptically to the five
scientists as Mr. L, Mr. C, Mr. DC, Mr. E,
and Mr. AL, although it is a well known
secret that Mr. L is Dr. Chung Lo of the
Applied and Pure Research Institute, Mr. C is
me, Mr. DC is Dimi Chakalov (independent
researcher)
2
, Mr. E is Professor Myron W.
Evans of the Alpha Institute for Advanced
Study, and Mr. AL is Professor Angelo
Loinger of the Dipartimento di Fisica,
Universitá di Milano
,
Italy; for those Readers
who were not aware of the well known secret.
Mr. ‘t Hooft provided a link on his webpage
to an interesting paper by Professor Loinger,
but none, unfortunately, to me or the other
scientists. I therefore elaborate herein on the
many comments Mr. ‘t Hooft has made on his
webpage concerning me and my scientific
work.
I shall begin by comparing the generic
defining characteristics of all alleged black
hole universes to all alleged big bang
universes as they require no mathematics to
fully understand.

Feb 15th, 2015
from what I've heard there is a black hole at the centre our milky way galaxy. they are apparently not stationary. I just hope that a black hole doesn't ever form near earth or approach earth.

Feb 15th, 2015
I would not worry to much about that since they they do not exist.

Upon what set of Einstein field equations and upon what solution thereto do they all rely for the "lots of stars and gas clouds that could fall onto the hot disk around the black hole" at "our Galactic Centre" in an expanding big bang universe that is "14 billion years old"? None!
What type of black hole do they allege at Sgr A*? They don't tell us in the above online report. Is it rotating or not, is it charged or not?
The singularity of the alleged non-rotating black hole is a mathematical point  it has no extension and hence no volume, but it allegedly has mass (and infinite density). The singularity of the alleged rotating black hole is the circumference of a circle; not a circle mind you, only the circumference of a circle. It too has no volume, but allegedly has mass (and infinite density).
" there must be a singularity of infinite density, within the black hole."
[Hawking, S. W., The Theory of Everything, The Origin and Fate of the Universe, New Millennium Press, Beverly Hills, CA, (2002)]
The big bang universes have a very peculiar nature:
"One crucial assumption underlies the standard hot big-bang model: that the universe 'began' in a state of rapid expansion from a very nearly homogeneous, isotropic condition of infinite (or near infinite) density and pressure."
[Misner, C. W., Thorne, K. S., Wheeler, J. A., Gravitation, W. H. Freeman and Company, New York, (1970)]
Now I ask you dear reader, how close to infinite must one get to be "near infinite"?
Misner, Thorne and Wheeler are not the only to propose such "near infinite" nonsense. It is quite standard fare for the proponents of black holes and big bangs.
"But is that, in fact, because of discovering that empty space has energy, it seems quite plausible that our universe may be just one universe in what could be almost an infinite number of universes and in every universe the laws of physics are different and they come into existence when the universe comes into existence."
[Krauss, L., A Show About Nothing, Q&A, television station ABC1, Australia, (Monday, 18 February, 2013a)]
I ask you, dear reader, just how close to infinite must one get to attain "almost an infinite number"? This is little different to the "near infinite" density and pressure of Misner, Thorne and Wheeler, and Hawking's infinite hotness of nothingness:
"At the big bang itself, the universe is thought to have had zero size, and to have been infinitely hot."
[Hawking, S. W., A Brief History of Time from the Big Bang to Black Holes, Transworld Publishers Ltd., London, (198

]
Professor Joss Bland-Hawthorn speaks about his 'research' in this Youtube presented interview:

Feb 15th, 2015
Black holes do exist its called the government treasury all money is sent
through the black hole and is repeatedly taxed and that is how you know

That's a real black hole for sure, however the ones we hear about by the nobel winning nuts are pure fiction. no volume, infinite mass and heat. The paper is realy funny because of Crothers sarcastic style, his lectures are hilarious.

Feb 15th, 2015
Telescopic contact lenses magnify words THREE-FOLD | Daily Mail Online
Those are cool.
Technically our sun was a black hole until it started to shed light about 4BYA

Telescopic contact lenses magnify words THREE-FOLD | Daily Mail Online
Those are cool.
Technically our sun was a black hole until it started to shed light about 4BYA

Read the paper, there are no black holes, they are impossible abstractions, acid dreams have more substance, and the explanations of the proponents of black holes are fantastical rot. Math is not required to read the paper and the laughter is very good medicine.

I would not worry to much about that since they they do not exist.

I would not worry to much about that since they they do not exist.

According to one scientist.

A bigger version of the sun. If our solar system is disk shaped and the galaxy is disk shaped then their physics should be similar. For a black hole to form it must collapse at the same rate from all directions. With the planets in a line away from the sun that would seem to indicate the sun has more mass around it's 'equator' and that would be normal for anything that is spinning.
If the planets are in line with the greatest mass of the sun then if it was to 'blow' that extra mass should hinder expansion so the break would be at the equal of the 'north and south poles of the sun'. That would also apply to the senter of the galaxy, some galaxies show a stream of plasma coming out at right angles to the main plane of the 'disk'.
The mass again seems to have a center-line so at the event horizon the lighter elements to go north and south and the heavier ones collect at a core which does not shed light because some elements are missing. They would seem to be up for grabs if other gravity was to come into the same vicinity, like another galaxy. Should the cores decide to blend together then that would be something like a big bang and the fireworks that goes along with that event. Light can be used to be the dividing line between light and dark but it is also governed by hot and cold physics. If an object with any mass is warming up then it will be increasing the volume in space that it is taking up. If the universe is expanding it will shed some light and expand at a certain rate, if rapid expansion exists then it has more stars being born than are dieing. As the expansion continues the odds of the plasma jets finding each other to form a new start gets slimmer and slimmer and the black hole is formed not from too much mass taking up an area but a little mass taking up a whole lot of area.
The universe is the tidbit and the void where we cannot form light is the rest of the doughnut. The collection of matter that created the big band (first light) took from 40GYA to 14BYA or whatever dates are relevant as long as one is a lot longer than the other one. A terurn should take just as long.
Oh yeah, coffee then playtime. www.youtube.com/watch?v=2Lyp5cbJEyo

According to one scientist.

What a good observation BL, you counted to one, there's hope for you yet. 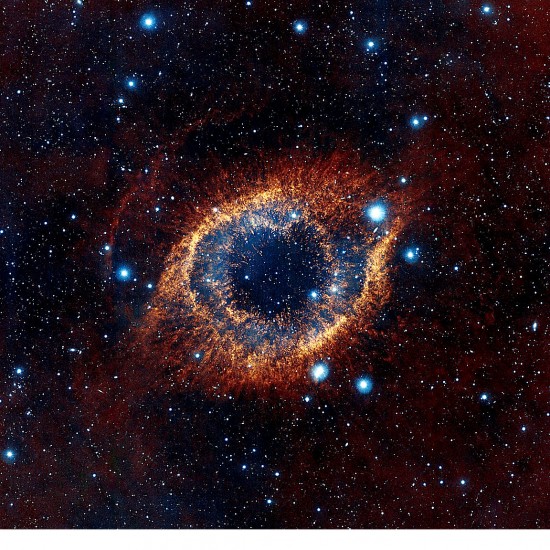 
Mar 2, 2015
An image of the Helix Nebula in the constellation Aquarius exposes more details of its electrical structure.
The infrared image shows radial Birkeland currents (called strands in the press release) crossing the concentric rings and converging on the central star. (Will strands now replace the former stringy things in the consensus lexicon?) One can see especially well in the high-resolution image that these currents consist of double filaments that spiral around each other and are evenly spaced around the rings.
From an Electric Universe point of view, the image is looking down the axis of the hourglass-shaped galactic current that powers the star. If viewed from the side, the nebula would have a structure like that of the Ant Nebula. The hourglass shape is caused by the Bennett pinch from which the star originated and accumulated its matter.
The rings will constit

db(THIS IS WHATS AT THE GALACTIC CENTERS)

Mar 2nd, 2015
All the black holes were wiped out by the Illuminate with chem-trails.

Mar 2nd, 2015
I always understood the "black hole" is the place where our taxes end up!