spaminator
+2
#1  Top Rated Post Jun 26th, 2016
from what I've heard on the news Mississauga might be exiting as well.

from what I've heard on the news Mississauga might be exiting as well.

I thought it was Bramptexit, it was going to rejoin India.

Jun 26th, 2016
So, . . . has anybody figured it out yet?
All of these 'exits' have one thing in common, referendum style voting. TPTB want to ruin that so all these useless referendums will be brought up to 'show' it is expensive, time consuming. and subject to manipulation through devious means.
Referendum votes can be done from home or a library or almost any Government Building as long as you have the right ID. Vote during a week and the tally is done over the weekend and published Monday morning. End of story.

Jun 26th, 2016
Like in multiple choice and no trick questions? Where would you go when online, some religious thread perhaps???

and as far as Brampton is concerned
its Canadexit:
we are leaving, Brampton stays

Like in multiple choice and no trick questions? Where would you go when online, some religious thread perhaps???

Jun 26th, 2016
sheesh
the hell with no exit
the sign should read NO ENTRY

Mar 22nd, 2019
Mississauga seeks to separate from Region of Peel
Kevin Connor
Published:
March 21, 2019
Updated:
March 21, 2019 7:16 PM EDT
Mississauga Mayor Bonnie Crombie (Ernest Doroszuk/Toronto Sun)
Mississauga wants to go it alone.
Mayor Bonnie Crombie won the support of city council on Wednesday to separate from the Region of Peel.
Council passed in principle my motion requesting the province pass legislation that Mississauga become independent from the Region of Peel, Crombie tweeted. Analysis shows we send $85 million to the region to fund the growth of other cities. This is not fair to residents and businesses.
Our money should go towards Mississauga priorities. We must be able to govern our affairs and set our vision without interference. Before finalizing our position, we will host a community meeting.
Such a move would need to be approved by the province.
Story continues below
Former mayor Hazel McCallion tried during her tenure to have Mississauga made its own entity.
Mississauga is the third largest city in the province after Toronto and Ottawa. Peel is made up of Mississauga, Brampton and Caledon. 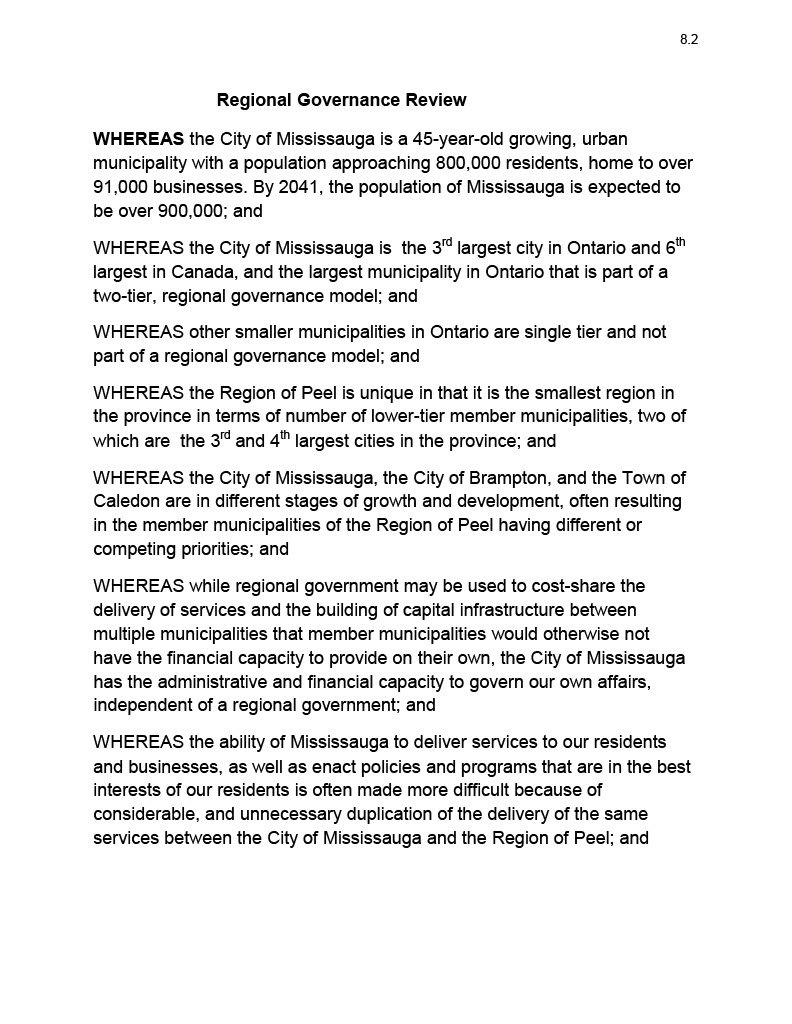 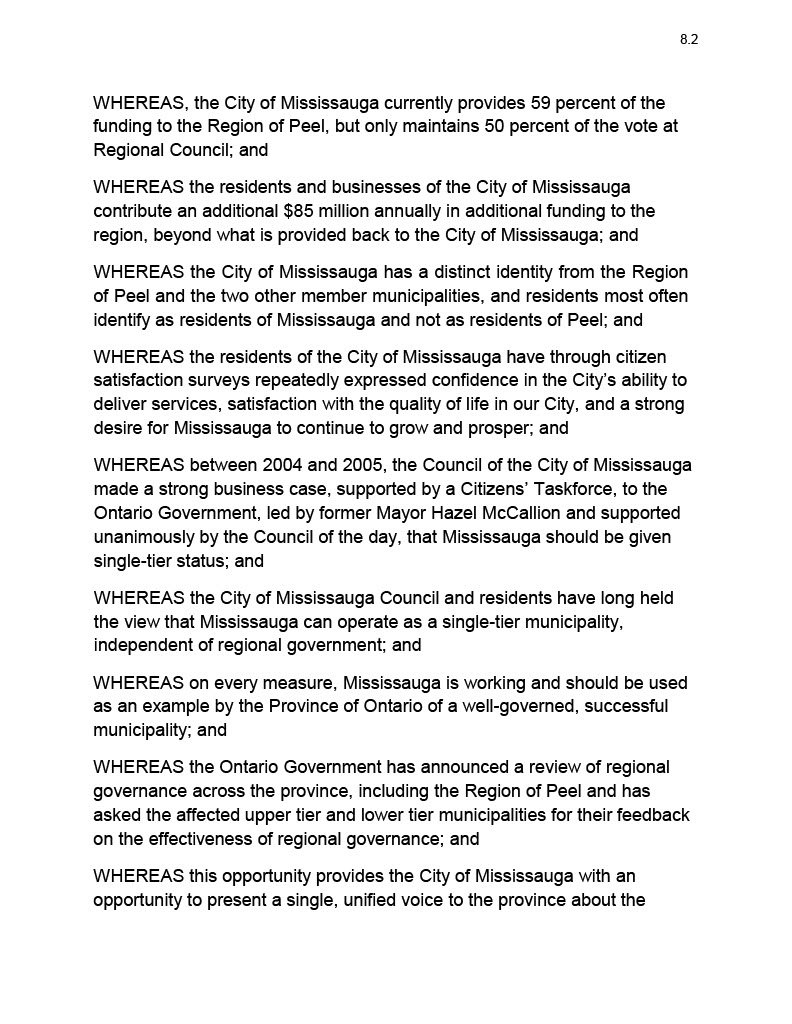 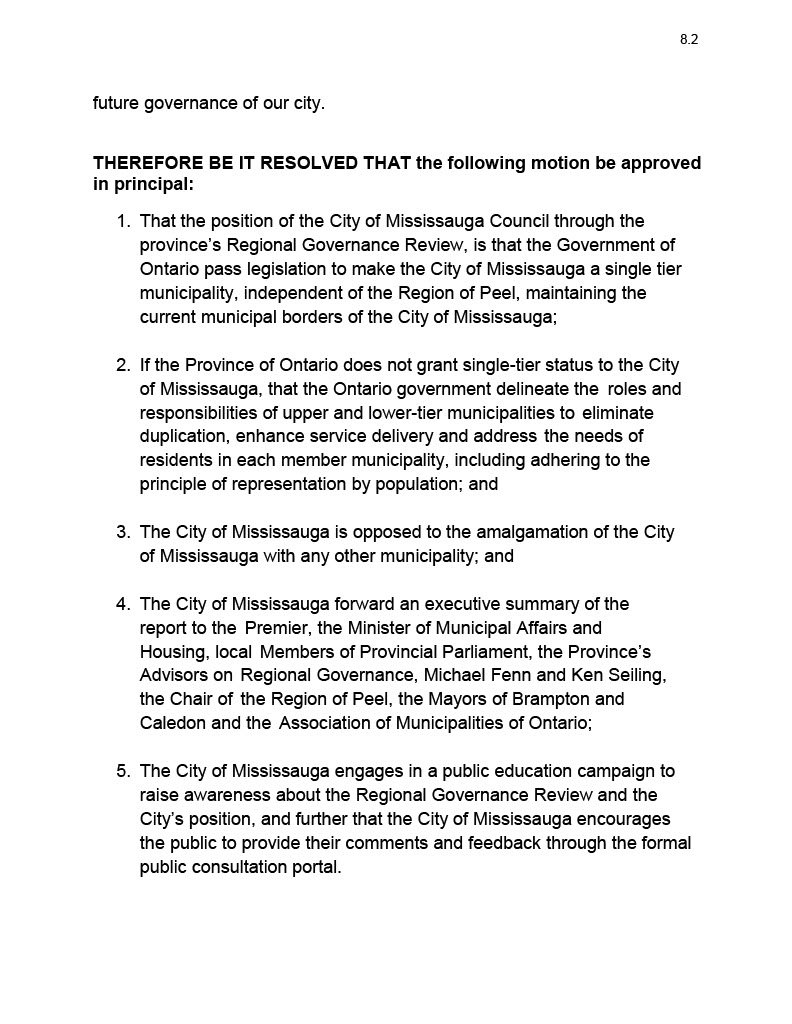 Mar 22nd, 2019
I heard that Ford had dusted off Harris's amalgamation textbook and was considering merging Halton and Peel together into one entity. On the one hand, there is some logic to it as they are so similar but that act would create one of the biggest governments in Canada ... bigger than most cities and provinces with a combined population of almost 2 million. That might turn out to be a Frankenstein monster for them.

May 1st, 2019
WARMINGTON: Mississauga makes big push to separate
Joe Warmington
Published:
April 30, 2019
Updated:
April 30, 2019 6:54 PM EDT
City Centre at Mississauga Night VeiwGetty Images
Its already well known that Mississaugas mayor Bonnie Crombie wants to be free.
But now with a new postcard campaign sent out to all households, Crombie is taking her dreams of separating from Peel Region directly to her residents.
The goal of the postcard is to raise awareness about the review and reach as many households in Mississauga with our position on why Mississauga should become an independent City, Crombie said Tuesday.
The postcards are like ballots. People are getting a say.
Move over Great Britain and Brexit.
While it is not easy to make one of those catchy, combining of words sayings by putting together Exit with Mississauga, this move ramps up the conversation about leaving Peel Region to stand alone.
Story continues below
This advertisement has not loaded yet,
but your article continues below.
The city of Mississauga is asking residents to show their support towards independence, says the postcard mailed out to its 721,599 residents.
It states Dear Premier Ford above four already checked boxes:
1: I want my tax dollars to stay in Mississauga and not subsidize Brampton and Caledon.
2: I believe Mississauga should have the power to make its own decisions
3: I want my council to have full accountability for local services
4: I want Mississauga to be an independent city no longer a part of Peel Region.
The form also states personal information on this form is collected and will be used to evaluate resident support for the city of Mississaugas preferred option to be an independent city that would have the ability to speak as one city, fully in control of its future with a distinct identity, like other cities already do.
Crombie and her peers also believe eliminating an entire layer of government would lead to a more efficient and effective government focused only on Mississauga priorities and hence ending $85-million a year to subsidize Brampton and Caledon.
My hopes are that residents will read the letter, agree with our position, fill out the postcard and drop it off at their nearest Canada Post mailbox to let Premier Ford know they support Mississauga separating from Peel Region, said Crombie.
Premier Ford has already shown hes for change. Ask the 24 councillors no longer with seats.
This could happen. It should happen.
Mississauga seeks to separate from Region of Peel
Province will pay for Mississauga LRT: Crombie
Mississauga is right there with Winnipeg as the seventh largest city by population in Canada and, situated on beautiful Lake Ontario, is one of the greatest big cities in the world.
Its home to Pearson International Airport and has citizens who get along great in a very safe environment.
Its a model for the world with a strong and smart mayor like Crombie and a sage council.
The skys the limit for what Mississauga could become with the two hands on the steering wheel being their own.
This is no slight on Brampton because I have the same positive view of that city too.
Its growth potential is enormous  both business and residential. Brampton, at more than 605,000 residents, also has an energetic and hungry young mayor in Patrick Brown leading a very sharp council.
Caledon also has excellent guidance under Mayor Allan Thompson and can easily eke out its own identify as a very special get away from the hustle and bustle city of 80,000  just minutes from the metropolis.
It could be a win, win, win.
It should not be talked about as a divorce but more of a growing-up and flying from the nest on ready wings situation.
The mayors shouldnt get bogged down on who paid for what but instead make sure the power grid is secure, the police and emergency services are set and get on with all going in their own direction but remaining tight neighbors.
But I know there are conflicting views and I want to hear them. Please participate in our online poll on www.torontosun.com.
It could offer an idea of what Premier Ford will see when Mississauga residents send in their postcard.

May 1st, 2019
Mister and Mississauga will not get their wish, unless they start voting Tory, real fast.

May 3rd, 2019
WARMINGTON: Brampton fights to keep Mississauga in Peel Region
Joe Warmington
Published:
May 2, 2019
Updated:
May 2, 2019 7:38 PM EDT
Mississauga Mayor Bonnie Crombie (L) and Brampton Mayor Patrick Brown
Mississauga is not going to leave Peel Region behind without a battle, promises Bramptons mayor.
Or without writing a fat cheque.
I will fight this proposed massive tax increase, Mayor Patrick Brown said Thursday. Mississauga pays enough taxes; Brampton pays enough taxes; Caledon pays enough taxes.
Mississauga council  led by Mayor Bonnie Crombie  has sent out a postcard to residents encouraging them voice their support for separating from Peel Region to Premier Doug Ford.
I realize the Mississauga leadership has embarked on an expensive taxpayer-funded, glitzy mailing campaign to convince Premier Ford to dissolve the Region of Peel, said Brown. But the facts show it will cost Mississauga residents more.
Story continues below
This advertisement has not loaded yet,
but your article continues below.
He warns a report commissioned this January by the region shows property taxes will skyrocket in Mississauga, Brampton and Caledon if Peel is split up.
Brown said adamantly: The mayor of Mississauga may be OK with this, but I dont support skyrocketing taxes.
The big areas Brown is concerned about are policing, water treatment and waste management.
Frankly, Brampton taxpayers own 40% of the Peel Police headquarters in Mississauga and the water treatment centre in Mississauga, he said. If they left, they would owe a huge capital bill to Brampton.
In the tens of millions.
Brown made it clear if Brampton was to become an independent city with our own police force and our own water treatment centre, we would have to be compensated.
Of course, Mississauga sees this differently.
A spokesman for Crombie said Browns claim that Mississauga would need to compensate Brampton for a wastewater treatment plant simply isnt true.
The spokesman added development charges at the region are paid by the developers in each city, and that money helps build the infrastructure needed to service the increased demand that development will bring which means building of a water treatment plant in Mississauga would have been paid for by Mississauga developers.
Mississauga contends it pays 60% of the building and maintenance of regional roads, but we only have 29% of them in our city.
Mississauga feels it over contributes $85 million per year and is just done carrying the financial weight of other municipalities.
Break ups are never pretty but sometimes they are necessary to grow. If there is a way to minimize the cost to the taxpayer, it is a noble pursuit for all three municipalities.
But it must be fair.
My feeling is while its nice for Mississauga to say development paid for a lions share of infrastructure used by Brampton or Caledon, the reality is they cant just take off and leave the others in Peel high and dry  starting from scratch with policing and water management.
My contention is rather than fight, they should be negotiating to do this evenly because the sky is the limit for all three. Mississauga is on Lake Ontario and ready to roar.
Brampton has the room, business background, talented work force and qualify of life to perhaps become the city with the highest population in Canada.
Caledon has also been a hidden gem and can really capitalize on that.
That said, it has to make good economic sense. Brown said right now it doesnt.
My bottom line is taxes, said Brown. I wont put new taxes on residents.
http://torontosun.com/news/local-new...in-peel-region

May 22nd, 2019
Brampton councillors vote to stay with Region of Peel
Canadian Press
Published:
May 22, 2019
Updated:
May 22, 2019 8:10 AM EDT
Brampton Mayor Patrick Brown, centre, and councillors appear in a video after voting to stay with Peel Region.
Councillors in Brampton have voted unanimously to maintain the citys two-tiered governance structure amid a provincial review of dozens of municipalities.
At a special meeting Tuesday evening, Brampton councillors voted in favour of keeping both the citys own municipal government and the wider Region of Peel government in place.
A statement from the city says the decision was made to protect the taxpayers of Peel Region, adding that dissolving the regional government would cost residents more.
It says the decision has been submitted to the special advisers leading the provincial review, who began their work in December and are set to make recommendations to the province this summer.
Ontario Municipal Affairs Minister Steve Clark said in January that the government isnt ruling out amalgamations as it reviews 82 municipalities across the province.
Councillors in Mississauga hope the city can become independent of Peel Region, while those in Caledon have voted to hold public consultations on the issue.
http://brampton.ca/EN/City-Hall/News...lease.aspx/615
http://twitter.com/i/videos/tweet/1131055871138705415
http://torontosun.com/news/local-new...region-of-peel