The NDP are still deleting their crazy social media posts, with the latest culprits being Myriam Rycroft and Andrew Tarver in Alberta.

It appears that the province's NDP government is shuffling senior staff for reasons unknown, and these two are the replacements.

The trouble with trying to clean up your social media trail is that, even after tweets are deleted, we can still see the replies and manual retweets.

So heres Rycroft being tagged in #UpForDebate tweets. (You may recall that Stephen Harper declined participation in that insane womens issues event, and with good reason .) 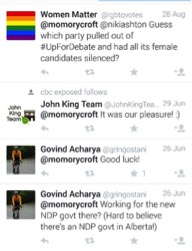 And check out Tarver stating that the NDP doesnt accept donations from oil and gas companies. (Presumably, all the union workers in the oil and gas industry are an exception...) 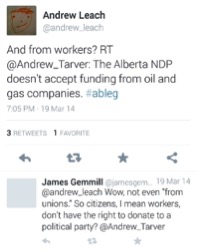 It appears that Rycroft erased all of her tweets until back in 2013 (photo), while Tarver deleted everything: LinkedIn, Facebook and Twitter.

Why did Rycroft delete her tweets? And why did Tarver delete all of his social media accounts? What are they hiding? 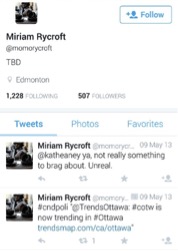 It looks like the Alberta NDP is finally getting the hang of vetting their employees before putting them up to bat, but their public actions are still speaking volumes. Cases in point: Brent Dancey, Katherine Swampy , Dave Mowat and Alex Johnstone .

We're less than six months into this provincial NDP government, so Im certain this isnt the last well see of their shady behaviour.

In Alberta, the NDP's "deleted tweets" saga takes a new twist - The Rebel