spaminator
#1 Sep 27th, 2019
McDonald's joins vegan push with Beyond Meat P.L.T. in SW Ontario
Reuters
Published:
September 26, 2019
Updated:
September 26, 2019 10:09 AM EDT
The logo of a McDonald's restaurant is seen in Los Angeles on Oct. 24, 2017.Lucy Nicholson / Reuters / Files
McDonalds Corp will test a new plant, lettuce and tomato sandwich using Beyond Meats patties in some restaurants in southwestern Ontario next week, following major rivals bets on the growing popularity of plant-based alternative meat.
The worlds largest burger chain joins Tim Hortons, KFC and Dunkin Brands in moving ahead with versions of a plant-based addition to their menus using Beyond Meats patties.
Shares of Beyond Meat, which have roughly tripled in value since the companys listing on the stock market in May, surged 17% in early trading, while those of McDonalds were up marginally.
The new PLT sandwich, which the company said was without artificial colours, flavours or preservatives, will be priced at C$6.49 plus tax and will be sold in 28 restaurants starting Monday.
Meet the P.L.T., a delicious, juicy plant-based burger, that will be available for a limited time as a test at selected restaurants in Southwestern Ontario. pic.twitter.com/0oozPRXGcT
 McDonald's Canada (@McDonaldsCanada) September 26, 2019
Beyond Meat, one of the pioneers of plant-based meat substitutes, is competing fiercely with Silicon Valley-based Impossible Foods for dominance of the plant-based meat market, which Barclays analysts say is expected to explode, growing to an estimated $140 billion over the next 10 years.
McDonalds already sells vegan burgers in some European countries. It joined hands with Nestle to launch the Big Vegan TS plant-based burger in Germany and The Big Vegan burger in Israel. It also offers the McVegan burger in Sweden.
A lot of people have been asking McDonalds if they are going to do this. I do think to offer the consumer another option is nice, but again, it remains to be seen on what the uptake is, said Brian Yarbrough, an analyst with Edward Jones.
Yarbrough pointed to Tim Hortons, owned by Canadas Restaurant Brands International, which recently pulled back its own Beyond Meat plant-based burger offering this month, citing the better demand for real beef burgers.
McDonalds said the 12-week test would allow it learn more about real-world implications of serving the PLT, including customer demand and impact on restaurant operations.
Separately, Nestle on Thursday launched its Awesome vegan burger patties in the United States. The company already sells vegan burgers in several European countries under the Garden Gourmet brand. 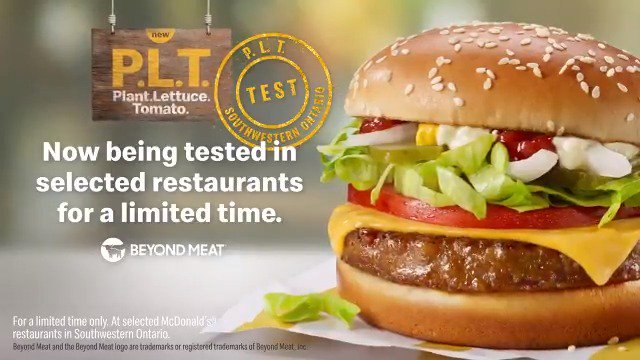 Re: McDonald's joins vegan push with Beyond Meat P.L.T. in SW Ontario


What is Soylent Green?