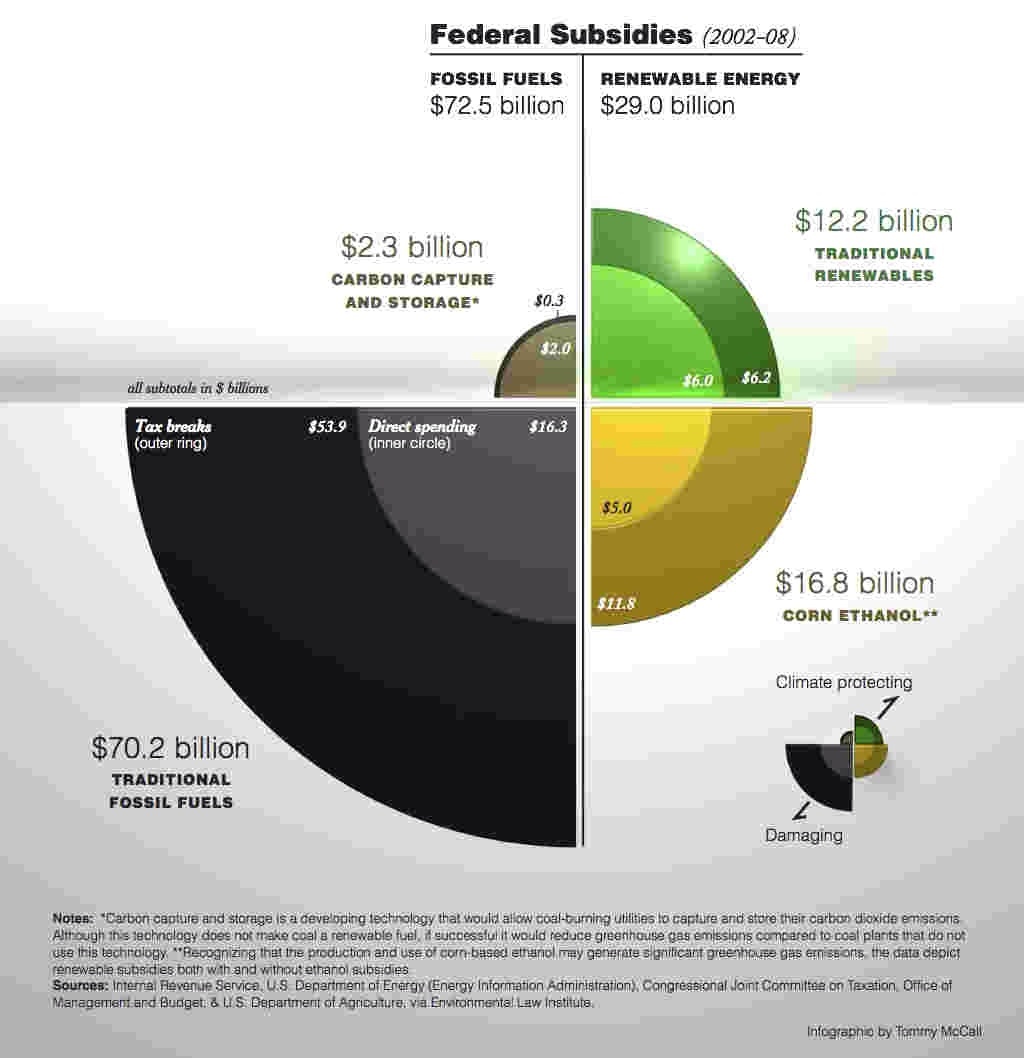 Fossil Fuel Subsidies Cost some $2 Trillion Annually, According To IMF

Science informs us about the environmental cost of our global fossil fuel habit  the IPCC recently reported that CO2 emissions from fossil fuel combustion and industrial processes contributed around 78 per cent of the total increase in greenhouse gas emissions between 1970 and 2010  but what about the economic cost?

As has been noted here before, the combined value of global fossil fuel subsidies can be difficult to calculate, with recent estimates ranging from $500 billion to $1.9 trillion. But according to the International Monetary Fund, when you factor in implicit subsidies from the failure to charge for pollution, climate change and other externalities, the post-tax cost comes in at closer to $2 trillion  equivalent to about 2.9 per cent of global GDP, or 8.5 per cent of government revenues.

This eyebrow-raising figure was quoted ahead of this weeks two-day conference in Kenya, co-hosted by UNEP, IMF, GIZ and the Global Subsidies Initiative of IISD. The theme of landmark meeting  Reforming Fossil Fuel Subsidies for an Inclusive Green Economy  will focus on how fiscal policies can address the perverse effects of fossil fuel subsidies and strengthen government spending for sustainable development.

Noting that global subsidies to the renewable energy industry were $88 billion in 2011, experts say reducing or eliminating fossil fuel subsidies  and properly pricing energy to account for environmental impacts  is one of the most effective ways governments can foster a low-carbon transition.

According to the IMF, simply removing fossil fuel subsidies could lead to a 13 per cent decline in CO2 emissions.

Fiscal policies are of particular importance in a green economy transition. Confronted by a fiscally constrained world, government reforms might appear to be a daunting challenge, said UN Under-Secretary-General and UNEP Executive Director Achim Steiner.

However, it is important to note that fossil fuel subsidies cost countries precious funds. For example, they divert government resources from pro-poor spending in Africa, where governments spend an estimated 3 per cent of GDP  equivalent to their total health care allocation  on fossil fuel subsidies, he added.

UNEP, which is currently undertaking green economy fiscal policy studies in various developing countries, says several countries, including Ghana, Namibia, the Philippines and Turkey, have shown it is possible to reform energy subsidies and prices.

One of the major recommendations of the experts heading up the Kenya conference is for governments to use policy to leverage private investment in green sectors by redirecting public investments to clean technologies and providing direct public expenditure for research and development.

In Australia, the Clean Energy Finance Corporation has provided proof positive of this  unlocking finance for $2.5 billion in renewables projects since beginning formal operations in July 2013. Not enough proof, however, to dissuade the current Abbott government from dismantling the $10 billion fund as soon as it is able.

May 8th, 2014
The 2014 Australian budget is an opportunity to end fossil fuel subsidies, so why won't it happen? | Alexander White | Environment | theguardian.com

May 8th, 2014
$16B wasted on ethanol that creates more emissions than using straight up gasoline.

How much of the subsidies have gone to NG to reduce coal use? Big bucks to those Dem new england states to frak you up the as$.

May 8th, 2014
So it is costing us taxes which are not collected because they haven't been invented yet?

In that case it could be viewed as a $2 trillion tax cut!