Alaska set to finish 2019 with warmest year on record

spaminator
#1 Dec 27th, 2019
Alaska set to finish 2019 with warmest year on record
Reuters
Published:
December 26, 2019
Updated:
December 26, 2019 5:48 PM EST
Winter rains atop of snow create a glaze on roads and parking lots and melt Westchester Lagoon, a popular ice-skating and pond-hockey site in Anchorage, Alaska, Dec. 9, 2019. Yereth Rosen / REUTERS
ANCHORAGE  Alaska is set to finish 2019 with a record average high temperature after a year of extremes ranging from a sweltering summer and rampant wildfires to vanishing sea ice and winter rains where heavy snows were once the norm.
Wildlife also suffered from the states chaotic weather, with mass die-offs of seabirds and marine mammals struggling to cope with ecological upheaval.
The turmoil is part of a rapid warming pattern in which Alaska  at the leading edge of climate change due to its proximity to the Arctic  is heating at twice the rate of the planet as a whole, researchers say.
Even with the current cold snap, I dont see any way that 2019 is not the warmest year on record, Brian Brettschneider, a climatologist with the University of Alaska at Fairbanks International Arctic Research Center, said in a tweet on Thursday.
Will every year be as warm as this? No. But the escalator is going up, said Rick Thoman, a scientist with the universitys Alaska Center for Climate Assessment and Policy.
Story continues below
Alaskas warmest year on record was 2016, when annual temperatures averaged 32.5 degrees Fahrenheit, or just over 0 Celsius. That was the first time the benchmark crept above freezing, according to the National Oceanic and Atmospheric Administration.
For 2019, the statewide average through November stood at 34.5 degrees, a year-to-date high that tops nearly a century of record-keeping.
THE BIG THAW
The spring melt on major rivers came earlier than ever and the uppermost layer of permafrost across the Seward Peninsula was thawed the entire year.
Summer temperatures soared to 90 or higher in several locales, including Anchorage, in the midst of a severe drought. Wildfires destroyed homes, triggered evacuations and fouled the regions air quality for weeks.
Unusually high ocean temperatures spawned toxic algae blooms in the Arctics Chukchi Sea.
The Arctic coast city of Utqiagvik  the predominantly Alaska Native settlement formerly known as Barrow and the northernmost city in the United States  recorded its most extreme thaw conditions on record. Stretches of the sea coast, once frozen solid by October, had yet to ice over by mid-December.
Its Dec. 20, and were finally getting some ice on the shore, said Billy Adams, who posts climate observations to a community network managed by the Arctic Research Center.
Vanishing sea ice causes ocean waters to absorb more heat, creating a kind of thermodynamic feedback loop that triggers a cascade of wide-ranging climatic consequences that extend around the globe, Thoman said.
In the Bering Sea, where fish populations were dislocated and carcasses of seabirds and seals littered shorelines, the effects of warming are notably acute, Thoman said.
The extraordinary conditions of 2019 offer a preview of Alaskas future.
Moving forward, these types of years will be more and more common, Brettschneider said. 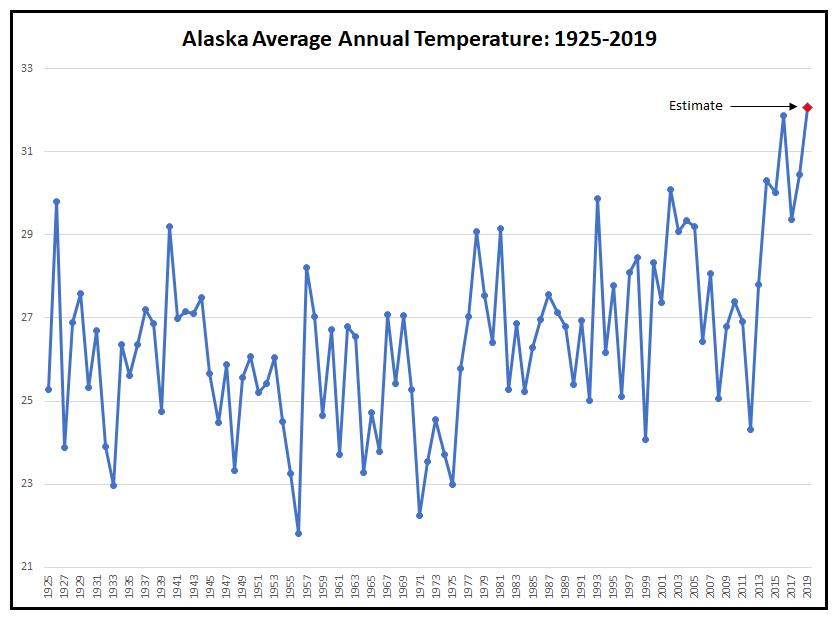 Dec 28th, 2019
Home » Global weather » You are reading »*FRIGID COLD* – A brutal outbreak of extremely cold (near -45 °C / -50 °F) temperatures blasts across much of Alaska (US) and Yukon (Canada) until the end of December and into early JanuaryBy Marko Korosec | Global weather | 23 December 2019

The turmoil is part of a rapid warming pattern in which Alaska — at the leading edge of climate change due to its proximity to the Arctic — is heating at twice the rate of the planet as a whole, researchers say.

But...but... According to Climate Barbie and the Liberal trolls only Canada was heating up that fast.

Dec 29th, 2019
Massive ice accumulation at a rate never before seen this year too. Go figure