spaminator
#1 Aug 16th, 2019
British government's anti-knife messages on fried-chicken boxes called racist
Washington Post
Published:
August 15, 2019
Updated:
August 15, 2019 1:26 PM EDT
The British government has come under fire for taking its #knifefree campaign to fried chicken.
LONDON  An initiative designed to tackle Britains persistent problem with violent knife crimes is being described as racially insensitive by critics after the government began placing anti-knife messages on fried-chicken boxes nationwide.
Critics of the campaign, announced by Britains Home Office on Wednesday, have called it racist for seemingly leaning into an offensive stereotype about fried-chicken consumers and for broadly targeting a segment of the population that has been demonized by the knife crime trend.
Lawmaker David Lammy spoke forcefully amid a storm of online criticism of the campaign, which will see more than 300,000 chicken boxes with the anti-crime message distributed in fast-food restaurants across England and Wales.
The packaging will feature real-life stories from people affected by knife crime. The boxes include the hashtag #KnifeFree.
Is this some kind of joke?! Why have you chosen chicken shops? Whats next, #KnifeFree watermelons? Lammy tweeted.
Speaking to the Guardian, Lammy called the campaign a ridiculous stunt and said it was explicitly racist or, at best, unfathomably stupid.
The Home Office is using taxpayers money to sponsor an age-old trope, he said.
Diane Abbott, a leader of the opposition party, called it crude and offensive.
Amid the polarizing debate over the chicken boxes on Thursday, a man was stabbed outside the Home Office headquarters in London and the building was placed on lockdown as armed officers arrived.
The victim is receiving medical care, a Home Office spokesman said, adding that the injuries are not life-threatening. A man was under arrest.
Britain has suffered from a rise in violent knife crimes over the last five years that has featured prominently in political debates and has raised questions about what prompted the spike.
According to statistics published by the BBC, there have been 43,516 knife-related crimes from March 2018 through March of this year, and medical workers have reported that wounds are becoming more severe. That marks an 80 percent increase from March 2014.
Knives have mostly been used to commit assaults and robberies. Major crimes like murders and rapes account for a small percentage of knife-related incidents.
The victims and perpetrators of the knife offenses were overwhelmingly young male minorities, the BBC reported, citing 2018 figures from the London mayors office.
The Home Office defended the chicken box plan in a statement on Thursday, saying it was rolled out after a trial received positive feedback earlier this year. It said the initiative is targeted at young people ages 10 to 21 years old from all backgrounds.
We chose to partner with chicken shops as research . . . showed that 67% of customers are aged between 16-24 so this would allow us effectively reach young people as part of our wider #knifefree campaign, the statement said.
On Thursday, Abbott argued in a piece published by the Metro newspaper that the government needs to have personal contact with those at the center of the problem and not waste resources on ineffective campaigns like the chicken boxes.
The public health approach involves police working closely with social services, education services and putting in place mentoring programs for those vulnerable to crime.
You cant mentor someone with a fried chicken box, Abbott wrote.
Kit Malthouse, a high ranking law enforcement minister, said the chicken boxes are part of a larger effort to tackle the knife crime issue that has included putting 20,000 new police officers on the street.
These chicken boxes will bring home to thousands of young people the tragic consequences of carrying a knife and challenge the idea that it makes you safer, he said. 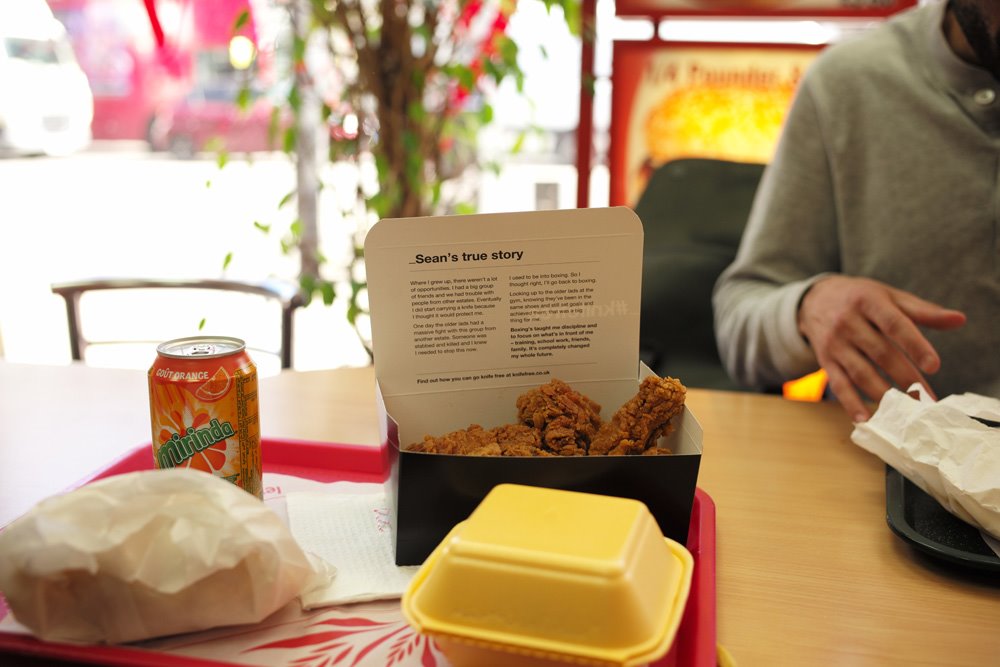 Aug 17th, 2019
Um, isn't Lammy being a bit racist by suggesting what he's suggesting? Like what, White people don't eat fried chicken or something?
I also find it amusing that he's pissed off about that, but not about the company who, considering what Lammy is implying with his trope complaint, is also racist for setting up shop in those neighbourhoods in the first place.

I mean if you build a string of fried chicken places all in predominantly Black neighbourhoods, is that also not racist?