spaminator
#1 Aug 11th, 2018
Beluga backlash: Inuit father faces critics after sharing photo of whale harvest
Canadian Press
Published:
August 10, 2018
Updated:
August 10, 2018 6:36 PM EDT
Albert Netser tweeted this picture of his 16-year-old son Nangaat standing on a rock in Rankin Inlet, Nunavut with his first harvested beluga whale on Monday.Albert Netser / THE CANADIAN PRESS
RANKIN INLET, Nunavut  An Inuit father who posted a photo on Twitter expressing pride in his sons first beluga whale harvest says hes received a lot of online backlash from people who dont understand life in the North.
When someone harvests a whale in Rankin Inlet its a celebration for the whole community, said Albert Netser. But its more special when it happens for the first time.
So when his 16-year-old son Nangaat harpooned a beluga whale earlier this week in the Hudson Bay, like any proud parent, he wanted to share the achievement. He shared the photo, showing his son proudly smiling standing on rocks at the edge of the water in front of the dead whale, with his 388 twitter followers on Monday.
Its something very special traditionally, culturally. The first harvest of any person was given out to the community or to the namesake of the child and, you know, this is what we did with the harvest, Netser said.
But soon after, the notifications on his phone started to blow up with many people sending derogatory comments about the whale being killed.
Netser tried to engage with some of the people by sharing the significance of the moment for Inuit. He explained that very few belugas are harvested in the community, maybe one a season if they are lucky, and every part of the animal is used.
We eat it raw, we eat it boiled, we eat it cooked, we eat it as smoked sausage, you know, out of the intestines, he said. People eat the meat, they fry the meat, they dry the meat. There are many ways of eating it. Its just to your preference.
Some of the people were receptive and appreciated learning about Inuit culture.
I just want to apologize for my ignoranceâ¦ I am deeply remorseful for my despicable comment, one user said.
But the block user option became a welcome relief for those that continued to post disparaging comments, Netser said.
There are some pretty harsh things that were mentioned. Im just happy my son didnt see them, he said, adding he did share the many supportive tweets with his son.
They do mean well maybe for the animal, but they just dont know our culture as well.
Beluga whales are classified as a near threatened species. Oil and gas development are the greatest threat to the species, says the World Wildlife Fund. The Nunavut Wildlife Management Board monitors the beluga populations while respecting Inuit harvesting rights.
The whales have always been important to Inuit communities. The skin and outer blubber are made into muktuk, which is a good source of nutrition. Newer recipes, such as sausage made by filling intestines with muktuk before being smoked, are also popular.
People may not understand the high cost of food in the North, Netser said, and how important the hunting season is to survival in the winter. He posted a photo on Twitter of a bag of dried mangos that cost more than $35.
We have our rich land in some seasons, and if we store food for the winter to come then we have food security, he said.
Netser said he hopes the experience can be used to teach people about the Inuit way of life.
They are more than welcome to look into any history, he said. Once they understand maybe they wont get so hurt or hateful to any one culture.

Aug 11th, 2018
That boy had a whale of a time . But why dont they just get their meat at the supermarket ? You would think they are nomadic hunter gatherers or something . 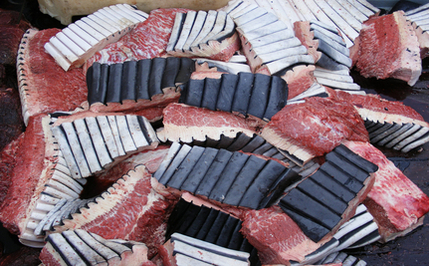