1 day ago
Even more factual historical events of WW II that I was never aware of. 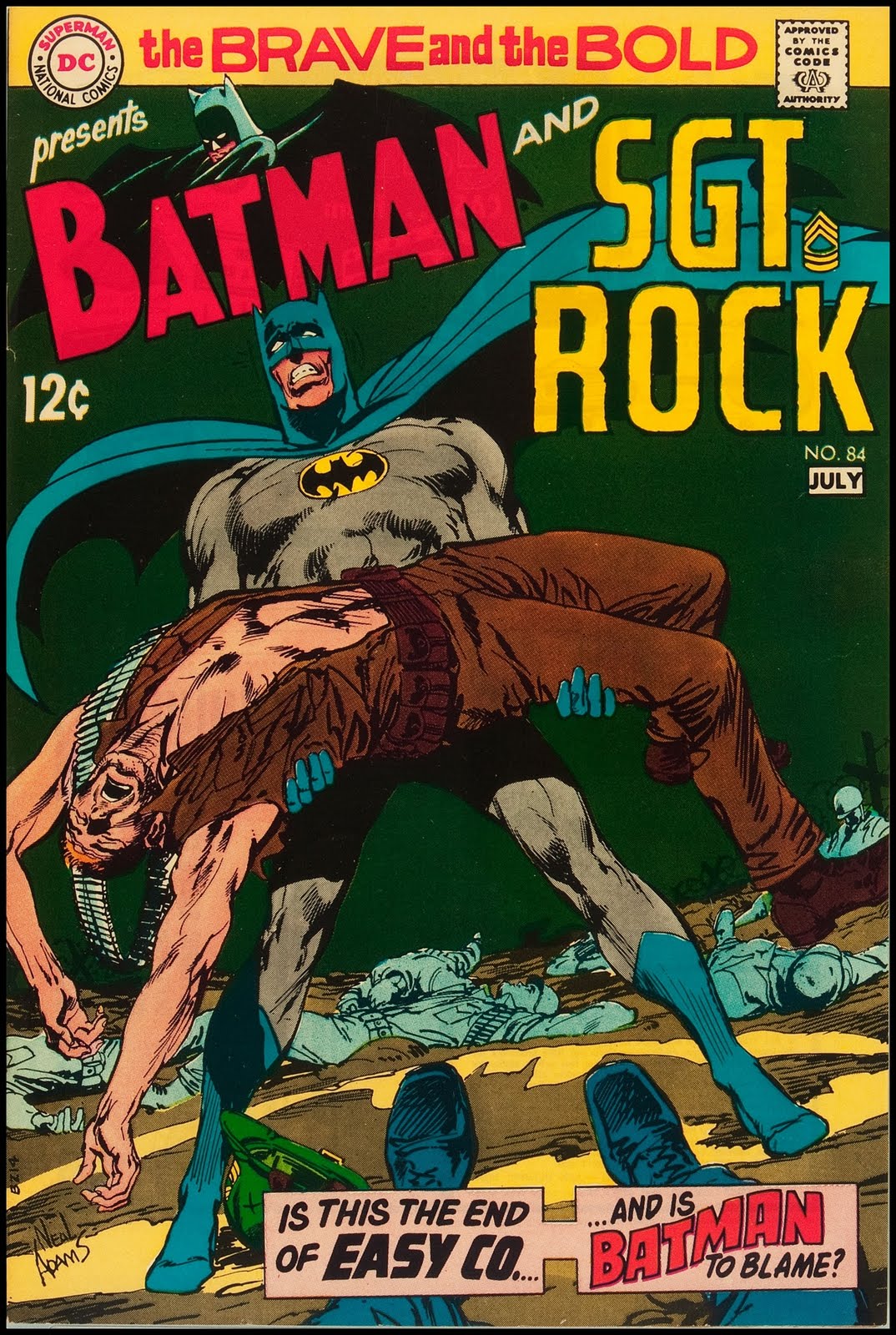 Boy howdy, I never ever knewed that Batman was such an integral part of the US Army. No wonder that the Americans beat the entire Axis powers all by their lonesome

Pretty funny hearing all these fellas that never quite managed to scrape up the balls to put on a uniform defending Canadian military honor.


Funny how the war mongers always default to that sad little comment.


Besides, what with Sgt Rock on duty, the world is safe

If it weren't for Sgt Rock single-handedly winning the war, we'd all be eating sour kraut and goose-stepping everywhere.

They were bad actors , they left racist graffiti in their wake in every episode .

Yes, tax, you've made it abundantly clear over the years that money is the only thing you value.

Funny how the war mongers always default to that sad little comment.

Yes, tax, you've made it abundantly clear over the years that money is the only thing you value.

Someone has to pay the taxes needed to keep the military running. Mostly I don't perform well under their system. I don't know how wages were for military in the US but in Canada when I was young enough they really sucked sucked. And as I discovered when I worked as a civilian mechanic their training is really bad and lots of shitty equipment.

Kinda like the trainer that laces-up the actual fighter's gloves

1 day ago
How much is a McBatwich w/ fries?


Care to elaborate 'cause as far as many, if not most/all Brits or French are concerned, they might suggest that they played a role in those wars that doesn't fit with the Sgt Rock-esque version of the Americans having single handedly won WW II (and WW I according to our forum historian).

Regular as a metronome.

Can we call a truce?

Canadians have always been there, usually in proportions to their population far exceeding the norm, and planning and fighting with exemplary skill and courage. Not only have they filled their generally-subordinate roles brilliantly, their acceptance of the fact that, because of the size of their contribution they won't be the Big Boss, has saved billions or trillions of wasted politicking and infighting.

Vimy Ridge, the Devil's Brigade, and Omaha Beach are just a few examples of their quality.

My personal favorite anecdote was of a Canadian UN convoy in the collapsing Yugoslavia that was halted by a Serbian (heavily-armed) checkpoint and told they could go no further. According to the accounts, the commander said "I understand, sir," returned to his vehicle, and ordered his convoy to smash through the checkpoint without another word. The Serbs, of course, did nothing. I was in the AF in Europe at the time, and I can personally attest to the admiration the Brits and Yanks expressed of the economy of effort and sheer balls of the "peacekeepers."

1 day ago
Thought we called a truce last time

That was on a whole 'nother subject.

It was wrong of me, generally, to bait y'all by deliberately tossing an emotional grenade, and even more wrong to disparage the courage and skill of Canadian forces over the decades.

I apologize to Canada, its people, its veterans and serving servicepeople, and especially RCS, should he ever decide to return.

I'll try to be a better man.

1 day ago
Tell ya what... You just be who you are and I'll do the same. I'm sure we'll find a middle ground

Note: many posters at CC will use a purple color to denote sarcasm when they deem necessary

Tell ya what... You just be who you are and I'll do the same. I'm sure we'll find a middle ground
Note: many posters at CC will use a purple color to denote sarcasm when they deem necessary

I wasn't being sarcastic, I was being an asshole.

That said, I refuse to signpost comments. It may lead to misunderstandings, but I strongly dislike the alternative.

See ya in the middle.

Kinda like the trainer that laces-up the actual fighter's gloves


The TRUTH OF COURSE was that WW2 was a team effort!


For instance It was not until summer 1942 that United States began manufacturing General Sherman tanks that were MUCH SUPERIOR to their previous OBSOLETE General Stuart tanks with their 37 mm popgun and LIGHT armour!


The Sherman`s were the best tanks made by Yankees during the war but were STILL OBSOLETE compared to German tanks!

It was not until Yankees began mounting Brit 17 pounder guns onto their Sherman`s that allied tank crews had a chance against German Tiger tanks!

that would fail and strand a crew in the middle of an anti tank ambush kill zone!


The Sherman also replaced the General Grant tank - same LARGE and cumbersome design as the Lee- but with better transmission!


In 1941 Yankees made arrangements to manufacture the Brit 6 pounder anti -tank guns as they HAD NOTHING like it on the drawing board!


In 1940 the Yankee air force HAD NO FIGHTER capable of meeting German fighters on equal footing!


Both the existing Yankee P-39 and P-40 fighters were OBSOLETE the day they came off the assembly line - they LACKED a supercharger and their performance suffered BADLY above 20,000 ft compared to ANY German fighter - leaving them vulnerable to AMBUSH by high flying German fighters!


Performance of P-47 fighters of 1940/41 were crippled by lack of Yankee capacity to build a suitable sized 4 blade propeller and P-38 was a flying FIRE HAZARD with both machines requiring MAJOR effort to keep them in the air! Yankee writer Martin Caidin notes in his history of P-38 that it was not uncommon to see FIFTY PERCENT of P-38`s DROP OUT OF A MISSION due to engine trouble!


The first major raid by U.S 8th army airforce on Germany in early 1943 went so BADLY WRONG that Yankees went back to bombing targets in France and Belgium - meaning CLOSER TO THEIR FIGHTER BASES - until summer 1944 -to avoid having their Flying Fortress fleet massacred!

Yankees went back to bombing Germany ONLY AFTER P-51 escort fighters- designed by Yankees around the Brit specified Rolls Royce engine and based on design features - regarding wing loading and other specs - based on Brit experience with Hawker Typhoon and Hawker Tempest fighter experiments!


Hawker Tempest was the fastest single seat and single engine piston driven fighter ever built and Brit experiments with it contributed heavily to their specs for P-51! And the Hawker Typhoon proved to have rather poor performance above 20,000 ft and Brits got some very critical wing design ideas from the Typhoon experiments - all of which contributed to the "Yankee" P-51!

Yankees also adopted the Brit 17 pounder antitank gun as well as the SABOT rounds as that stuff was way better than anything
on a Yankee design board! The SABOT armour piercing ammunition was so good even the Germans copied it once they managed to find some samples to take back to the lab!

And of course Yankees jumped on the chance to buy the Brit radar design!

"if the other armies- meaning Brits and Cdns had suffered as the Yankees did, then the invasion WOULD HAVE FAILED! Yankee navigators got lost, Yankee planners completely guessed wrong regarding how long it would take SeaBees to clear beach obstacles and mines, Yankee planners grossly over estimated the power of their own airforce and Yankees BADLY over estimated the quality of General Sherman tanks!

Even in areas that Yankees considered their own unique effort - Brits were behind the scenes! In 1933 - Germans began building their Enigma coding machines - and then sold the rights to the design to Imperial Japan!

In 1938 - a bunch of PRIVATE SECTOR Brit Patriots assembled in support of Churchill and managed to STEAL a copy of the Enigma machine! And Brits began READING ALL German communications in spring 1940 and began reading ALL Japanese communications later that year!


Brits gave Yankees SO MANY HINTS about intercepted Japanese messages that the top secret Yankee Purple code group was able to PARTLY DECIPHER Japanese messages and clue in that Japan was going to attack Midway island - thus setting up the very dramatic carrier battle at Midway -which gave the allies a REAL MORALE BOOST but actually DID LITTLE to change the course of the war as Japan was already very low on fuel - thus Japanese ability to either attack or defend was already compromised!


As for Britain - she was bankrupt by spring 1941 and Churchill secretly gave Roosevelt a NASTY CHOICE - either provide Brits with war materials so they could fight on to victory - or Brits would negotiate a peace with Germany AND LEAVE WASHINGTON ALONE
to deal with BOTH Germany and Japan!


Yankee Lend/Lease started up RIGHT AFTER that discreet Churchill speech!

From such details we can easily see that Britain generally supplied the brains and the strategy and Yankees largely provided the SUPPLIES and that IT WAS A TEAM EFFORT!


HAHAHAHA -T-GURLY wants to be a plaything for Sgt Rock!

21 hours ago
Idris Elba (who has coronavirus): For me, thats a stand-out thing that is really obvious. This is almost like the worlds cry out. Like: Hey, hey, hey  you are kicking me and what youre doing is not good, so we will get rid of you.