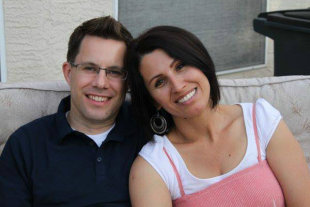 An Arizona woman who was arrested in Mexico last week on suspicion trying to smuggle 12 pounds of marijuana into the United States was framed, her family says.

"She's innocent," Anna Soto, one of Yanira Maldonado's seven children, told CNN. "She's an honest good womana Christian woman that would never do anything to jeopardize her freedom."

Maldonado was arrested Wednesday while she and her husband were returning to Phoenix by bus from an aunt's funeral.

The bus was stopped at a military checkpoint near Hermosillo in northwestern Mexico, where authorities say they found the 12-pound stash of marijuana under her seat.

Her husband, Gary Maldonado, says he was told by Mexican authorities he would have to pay $5,000 for her release. "Never ever in our lives [did we] deal with drugs or do drugs," Gary Maldonado told Phoenix's Fox 10 affiliate. "Everybody from the very beginning was telling us, 'We know you guys aren't guilty, but this is just the process.'"

The couple stored their luggage in a compartment under the bus, he said, adding that witnesses and video would prove they boarded the bus without packages.

Yanira Maldonado was transferred to a jail in Nogales, Mexico. A hearing is scheduled for Tuesday.

"My biggest fear is that I will never get to see her again," Soto said.

Maldonado's family members are not the only ones skeptical about the charges.

Arizona Sen. Jeff Flake is "personally monitoring the situation" and "has had multiple conversations with the deputy Mexican ambassador this weekend," the senator's office said Monday.

"A passenger by himself or herself would have been unable to carry almost six kilos of marijuana onto a bus without being noticed," an unnamed Mexican official told CNN. "She must've been framed."

She has been set free!!!

This was such a BullSh*t deal for this Arizona Mom.

When you travel on a bus (Greyhound type) in Mexico, they video tape, check your bags and take your photo when you are seated on the bus..

The lawyer was able to pull video tape to prover her innocents..

May 31st, 2013
She obviously didn't bribe the borer guard enough.

WTF are you talking about.. bribe the border guard?

I've lived in Mexico. The cops and soldiers are corrupt as hell down their. They will plant drugs and quickly ask for a bride not to charge you.

Hell, what I love about Mexico is when I am driving, you can pretty much run as fast as you want. When the officer pulls you over, you fold up 100 pesos under your license when you hand it to him.. he'll tell ya to slow down and have a nice day.

Corruption is ramped in Mexico and foreigners have money and are the best targets..

This is my favorite city.. Cuernavaca, Mexico

May 31st, 2013
I probably can't go back there. Had to surrender my "licence" until the fine was paid. To this day, I still don't know if the cop ever used my Library Card....

I probably can't go back there. Had to surrender my "licence" until the fine was paid. To this day, I still don't know if the cop ever used my Library Card....