Just 2% of people in Britain at the time had the vote, and all of those were (mostly wealthy) men. Hunger was rife, due to the disastrous Corn Laws. The Corn Laws were import tariffs designed to support domestic British corn prices against competition from less expensive foreign imports between 1815 and 1846. As a result, many people couldn't afford bread.

By the beginning of 1819 the pressure generated by poor economic conditions, coupled with the lack of suffrage in northern England , had enhanced the appeal of political Radicalism . In response, the Manchester Patriotic Union, a group agitating for parliamentary reform, organised a demonstration to be addressed by the well-known radical orator Henry "Orator" Hunt .

Shortly after the meeting began in St Peter's Fields, local magistrates called on the militia to arrest Hunt and several others on the hustings with him, and to disperse the huge crowd.

Cavalry charged in, with sabres drawn, and in the ensuing confusion 15 people (some say 18 people) were killed, including a woman and a child, and 700 were wounded.

The massacre was given the name Peterloo in ironic comparison to the Battle of Waterloo, which had taken place four just years earlier.

To mark the anniversary, Manchester is hosting a series of events including music and poetry reading.

There is also going to be a permanent memorial in St Peter's Square, formerly St Peter's Fields, where the massacre took place.

The Peterloo Massacre, Manchester, 16th August 1819, in which 15 people were killed and 700 wounded

A series of events marking the 190th anniversary of a bloody chapter in Manchester's history, the Peterloo Massacre, are taking place.

Up to 15 people were killed and 700 injured when militia attacked pro-democracy campaigners at St Peter's Fields on 16 August 1819.

Campaigners were marching into the city on Sunday to meet outside Manchester Central to honour those who died.

Music, poetry readings and exhibitions are also taking place in the city.

In 2007, campaigners won their battle for a plaque marking the fact people lost their lives.

A previous blue plaque made no mention of casualties.

Plans are currently under way for a permanent memorial in the city as part of the redevelopment of St Peter's Square.

Paul Fitzgerald, of the Peterloo Memorial Campaign, said there was an "underground reservoir of passion" about the "much-neglected event in Manchester's history".

"With the council's announcement of plans for a memorial in St Peter's Square, this is a crucial year for Peterloo," he said.

"As we near the 200th anniversary, it's vital we put an end to the long and shameful tradition of neglecting or whitewashing the memory of this turning point in the history of democracy."

Anyone with an interest in the history of the event is invited to take part in the commemorations.

Campaigners were marching from Oldham and Middleton on Sunday, following the original marching routes of 1819, before raising 20 liberty caps on wooden poles.

The red and gold liberty cap is an ancient symbol of political freedom and was targeted by the cavalry during the Peterloo Massacre.

Councillor Jim Battle, Deputy Leader of Manchester City Council was among those taking part in the event.

He said: "Manchester has a proud history of fighting for democracy, freedom and justice and is a legacy we will continue to commemorate and honour, ensuring future generations learn about the city's radical past."

A crowd of at least 60,000 campaigners gathered peacefully on St Peter's Fields in 1819 to demand the reform of Parliamentary representation.

But local militia on horseback charged the protesters and cut them down with sabres.

The exact number of people killed has been a matter of historical debate, but experts say the number is about 15, with between 400 and 700 people injured. 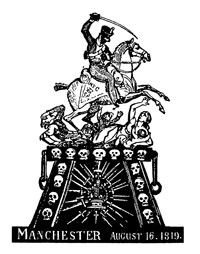 On the 16th of August 1819 the huge open area around what's now St Peters Square, Manchester, played host to an outrage against over 60,000 peaceful pro-democracy and anti-poverty protesters; an event which became known as The Peterloo Massacre.

An estimated 18 people, including a woman and a child, died from sabre cuts and trampling. Over 700 men, women and children received extremely serious injuries. All in the name of liberty and freedom from poverty.

The Massacre occurred during a period of immense political tension and mass protests. Fewer than 2% of the population had the vote, and hunger was rife with the disastrous corn laws making bread unaffordable.

On the morning of 16th August the crowd began to gather, conducting themselves, according to contemporary accounts, with dignity and discipline, the majority dressed in their sunday best.

The key speaker was to be famed orator Henry Hunt, the platform consisted of a simple cart, located in the front of what's now the Gmex centre, and the space was filled with banners - REFORM, UNIVERSAL SUFFRAGE, EQUAL REPRESENTATION and, touchingly, LOVE. Many of the banner poles where topped with the red cap of liberty - a powerful symbol at the time.

You can see where all this took place on these two maps of Manchester .

Local magistrates watching from a window near the field panicked at the sight of the crowd, and read the riot act, effectively ordering what little of the crowd could hear them to disperse.

As 600 Hussars, several hundred infantrymen; an artillery unit with two six-pounder guns, 400 men of the Cheshire cavalry and 400 special constables waited in reserve, the local Yeomanry were given the task of arresting the speakers.

The Yeomanry, led by Captain Hugh Birley and Major Thomas Trafford, were essentially a paramilitary force drawn from the ranks of the local mill and shop owners.

On horseback, armed with cutlasses and clubs, many were familiar with, and had old scores to settle with, the leading protesters. (In one instance, spotting a reporter from the radical Manchester Observer, a Yeomanry officer called out "There's Saxton, damn him, run him through.")

Heading for the hustings, they charged when the crowd linked arms to try and stop the arrests, and proceeded to strike down banners and people with their swords. Rumours from the period have persistently stated the Yeomanry were drunk.

The panic was interpreted as the crowd attacking the yeomanry, and the Hussars (Led by Lieutenant Colonel Guy L'Estrange) were ordered in.

As with the Tiananmen Square Massacre, there were unlikely heroes amoung the military. An unnamed cavalry officer attempted to strike up the swords of the Yeomanry, crying - "For shame, gentlemen: what are you about? The people cannot get away!" But the majority joined in with the attack.

The term 'Peterloo', was intended to mock the soldiers who attacked unarmed civilians by echoing the term 'Waterloo' - the soldiers from that battle being seen by many as genuine heroes.

By 2pm the carnage was over, and the field left full of abandoned banners and dead bodies. Journalists present at the event were arrested, others who went on to report the event were subsequently jailed. The businessman John Edwards Taylor went on to help set up the Guardian newspaper as a reaction to what he'd seen.

The speakers and organizers were put on trial, at first under the charge of High treason - a charge that was reluctantly dropped by the presecution. The Hussars and Magistrates received a message of congratulations from the Prince Regent, and were cleared of any wrong-doing by the official inquiry.

Historians acknowledge that Peterloo was hugely influential in ordinary people winning the right the vote, led to the rise of the Chartist Movement from which grew the Trade Unions, and also resulted in the establishment of the Manchester Guardian newspaper.

According to Nick Mansfield, director of the Peoples History Museum in Salford, "Peterloo is a critical event not only because of the number of people killed and injured, but because ultimately it changed public opinion to influence the extension of the right to vote and give us the democracy we enjoy today. It was critical to our freedoms."

By Samuel Bamford, 1788 - 1872.
Bamford was arrested after he massacre, and imprisoned for a year.

"In about half an hour after our arrival the sounds of music and reiterated shouts proclaimed the near approach of Mr Hunt and his party; and in a minute or two they were seen coming from Deansgate, preceded by a band of music and several flags.

Their approach was hailed by one universal shout from probably 80,000 persons. They threaded their way slowly past us and through the crowd, which Hunt eyed, I thought, with almost as much of astonishment as satisfaction. This spectacle could not be otherwise in his view than solemnly impressive.

Such a mass of human beings he had not beheld till then. His responsibility must weigh on his mind. The task was great, and not without its peril. The meeting was indeed a tremendous one.

Mr Hunt, stepping towards the front of the stage, took off his white hat, and addressed the people.

We had got to nearly the outside of the crowd, when a noise and strange murmur arose towards the church. Some persons said it was the Blackburn people coming, and I stood on tiptoe and looked in the direction whence the noise proceeded, and saw a party of cavalry in blue and white uniform come trotting, sword in hand, round the corner of a garden wall, and to the front of a row of new houses, where they reined up in a line.

"The soldiers are here," I said; "we must go back and see what this means." "Oh," someone made reply, "they are only come to be ready if there should be any disturbance in the meeting." "Well, let us go back," I said, and we forced our way towards the colours.

On the cavalry drawing up they were received with a shout of goodwill, as I understood it. They shouted again, waving their sabres over their heads; and then, slackening rein, and striking spur into their steeds, they dashed forward and began cutting the people..."
"Stand fast," I said, "they are riding upon us; stand fast".

The cavalry were in confusion: they evidently could not, with all the weight of man and horse, penetrate that compact mass of human beings and their sabres were plied to hew a way through naked held-up hands and defenceless heads; and then chopped limbs and wound-gaping skulls were seen; and groans and cries were mingled with the din of that horrid confusion.

Many females appeared as the crowd opened; and striplings or mere youths also were found. Their cries were piteous and heart-rending, and would, one might have supposed, have disarmed any human resentment: but here their appeals were in vain.

In ten minutes from the commencement of the havoc the field was an open and almost deserted space. The sun looked down througha sultry and motionless air. The curtains and blinds of the windows within view were all closed.

The hustings remained, with a few broken and hewed flag-staves erect, and a torn and gashed banner or two dropping; whilst over the whole field were strewed caps, bonnets, hats, shawls, and shoes, and other parts of male and female dress, trampled, torn, and bloody.

Several mounds of human being still remained where they had fallen, crushed down and smothered. Some of these still groaning, others with staring eyes, were gasping for breath, and others would never breathe more.

All was silent save those low sounds, and the occasional snorting and pawing of steeds.