Blackleaf
#1 Mar 24th, 2018
Continuing a tradition popularised by the Victorians, "mudlarkers" scour the foreshore of the Thames in search of historical treasures.

Two thousand years of human history are revealed by the low tide on London’s largest archaeological site and we spoke to the foreshore’s mudlarkers about their favourite finds... 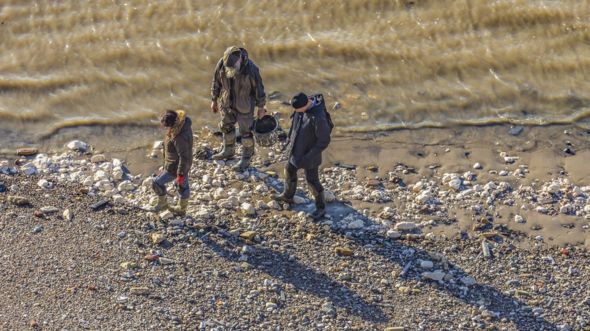 Continuing a tradition popularised by the Victorians, "mudlarkers" scour the foreshore of the Thames in search of historical treasures.

Two thousand years of human history are revealed by the low tide on London’s largest archaeological site and we spoke to the foreshore’s mudlarkers about their favourite finds.

At around 5am every morning, mudlarkers like Nick Stevens set out to explore the foreshore's offering. 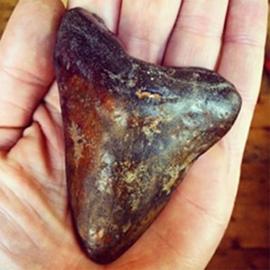 Megalodon was an ancient kind of shark

Nick came to mudlarking through his childhood interests in fossil hunting which explain how he managed to spot a rare Megalodon tooth in the barge bed.

"I always loved fossils so when I saw this I had a hunch it was from something big."

The Megalodon was a type of shark that lived in UK waters millions of years ago.

The shark ancestor had a bite force of 12 to 20 tonnes, roughly six to 10 times stronger than the bite of modern great whites.

"The tooth would have been buried up to 16 million years ago before being washed out of the Essex clays," Nick says. 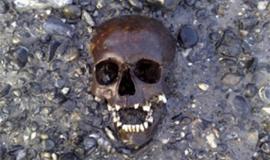 One of the more shocking finds

Another of Nick's most memorable finds is a 17th Century traders' token from Puddling Lane. The token was made just eight years before the Great Fire of London by a winemaker named Brian Appleby. Traders would typically produce their own tokens for use as coins when the Mint ran out.

"The tokens always have the trader and his wife’s name, their trade, location and date like the one I found from Brian Appleby in 1657 who was a vintner at Ye Maidenhead on Pudin (Pudding) Lane."

Nick even found the human skull of a 12-year-old girl which has since been carbon-dated to 1730.

After he saw the skull, Nick returned with an archaeologist friend to discover the skeleton and noted the grave cuts in the soil, suggestive of a marsh-land burial.

The remains now sit in the Museum of London and have inspired Nick's plan to open a Museum of Mudlarking on the foreshore. 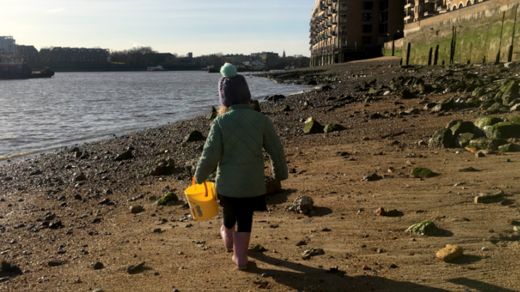 "Every tide reveals something different and each find is a precious window into past lives lived on and around the capital’s river," she says. 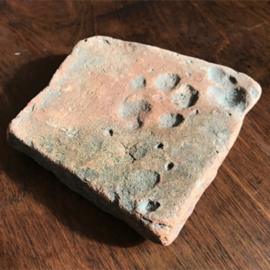 Leaving their mark: An animal paw recorded in a tile

The Facebook site Lara started in 2012 now has 32,911 followers, posting photographs of a range of artefacts from love tokens, buckles and thimbles to curlers and combs.

Lara relishes in finding these ordinary pieces of everyday life.

"Medieval floor tiles like this one often wash up and I love how the paw prints capture a moment in time - a dog or cat scarpering across the nearly-dry clay."

Lara's most memorable find is a 500-year-old leather Tudor shoe.

"It even has indentations in the sole from the toes and heel of the last person to wear it," she explains.

"The shoe is preserved amazingly well in the foreshore because the mud is anaerobic, creating an oxygen-free environment which preserves them as if they’d been lost yesterday." 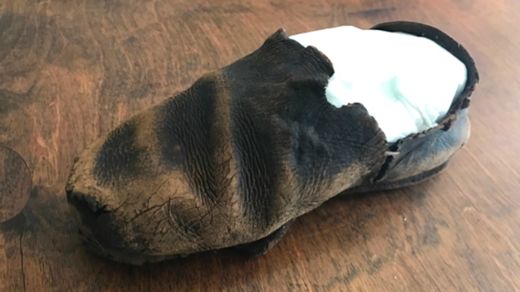 Lara contacted Cardiff University's conservation department where the shoe then became involved in a project to study the process of conserving leather.

"When I found this beautiful complete one I decided it needed to be conserved properly. I had it for two years before I could find someone to conserve it for me."

Florence Evans grew up near the river in southwest London and fell in love with mudlarking as a child, having a keen eye for collecting willow pattern fragments of blue and white china. 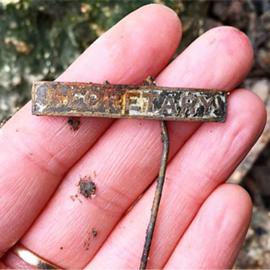 It wasn't until maternity leave that Florence's interests in mudlarking reignited: "It was a brilliant way of getting head space while my daughter fell asleep in the sling."

Florence’s favourite find is a merino glass bead dating to the 1500s. "I wear it on a chain and love the thought that it could have snapped off a Renaissance woman's necklace while she walked through a London street."

Another notable find is a mysterious enamel tie pin. Florence found the Freemason male secretary's pin on the foreshore and believes it to be dated to the 1920s.

"Different areas of the beaches have different finds. Metal congregates together while pottery washes up in another place as the river organises itself," Florence says.

Four-year-old daughter Cecilia has already developed a love of purple pottery and anything with flowers and birds.

"She's become my mudlarking companion, learning history through the river like I did. It's a joint joy."

A current foreshore permit from the Port of London Authority is needed for anyone wishing to search the Thames' muds.