The archaeological legacy of the Crossrail excavations

Blackleaf
#1 Feb 10th, 2017
The skeletons of plague victims, a Tudor bowling ball and medieval ice skates fashioned from animal bones are among hundreds of artefacts on display at a new exhibition showcasing the most interesting finds made during the Crossrail excavations.

The archaeological legacy of the Crossrail excavations

The skeletons of plague victims, a Tudor bowling ball and medieval ice skates fashioned from animal bones are among hundreds of artefacts on display at a new exhibition showcasing the most interesting finds made during the Crossrail excavations.

What's been unearthed undoubtedly offers a fascinating insight into London life over the centuries - but what will be the archaeological legacy of what is Europe's largest infrastructure project?

Tens of thousands of artefacts have been dug up during work to create the 26-mile Elizabeth Line, which runs from the east to the west of the capital.

With careful planning, 20 sites were excavated by archaeologists at locations where ventilation shafts were put in, where railways entered tunnels and where new ticket halls were to be built.

"We've managed to take a slice down through London but also across London," said Jackie Keily, the curator of the exhibition at the Museum of London Docklands.

One of Ms Keily's favourite exhibits is a bowling ball discovered at the site of a Tudor manor house in Stepney Green.

"It's amazing it survived," she said. 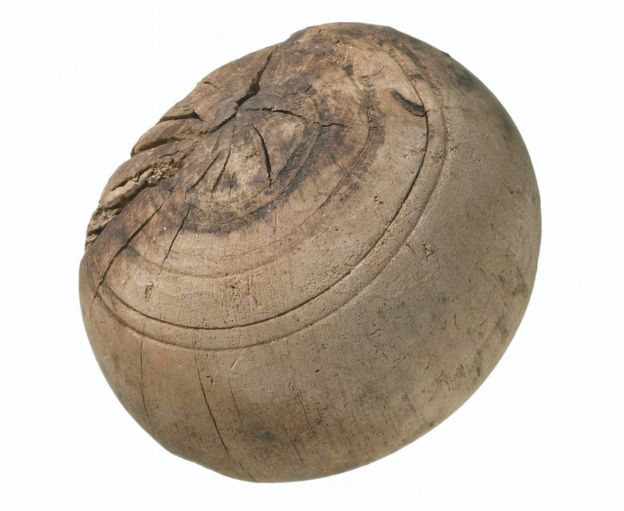 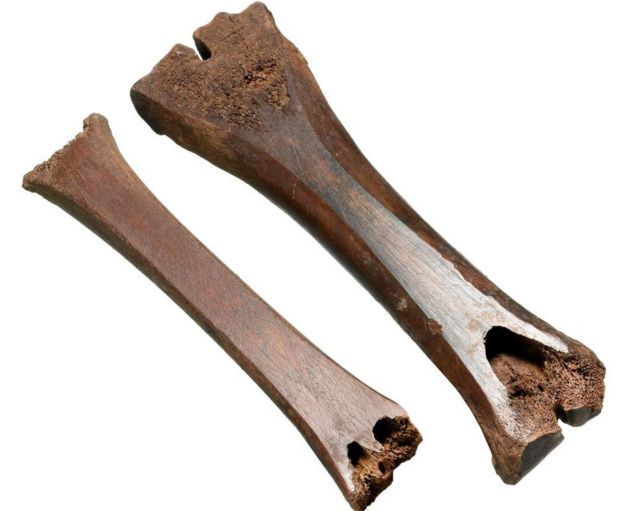 These objects, found near Liverpool Street station, have been identified as ice skates with the help of the writings of a 12th Century monk, who described young men skating on bones tied to their shoes

"It had been in a moat which was boggy. Henry VIII brought in a ban banning commoners from bowling. It was only for the aristocracy.

"Stepney Green is now part of Greater London but it would have been a weekend retreat in the countryside."

A chamber pot found beneath 19th Century terraced housing, also in Stepney Green, ranks as another highlight for Ms Keily.

"It dates back to when there were no indoor toilets or bathrooms," she said. "This one is fabulous because it has a shocked-looking man saying: 'What I see I will not tell'." 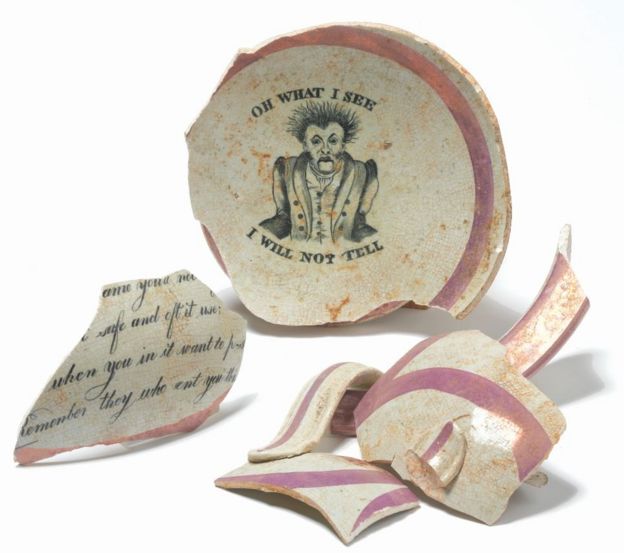 This chamber pot gives an insight into modesty in Victorian times

The discoveries made were by no means restricted to those from Victorian, Tudor or medieval times though, with considerably older items being unearthed, including bison bone fragments in the part of the capital we now call Royal Oak.

Asked if there had been previous evidence of bison roaming there, Ms Keily said: "We kind of knew but it's incredible to find the remains.

"There were three fragments of bison bone and one of reindeer from an antler. They were dated back to about 68,000 years ago.

"Some of the bones had traces of gnawing, possibly from wolves." 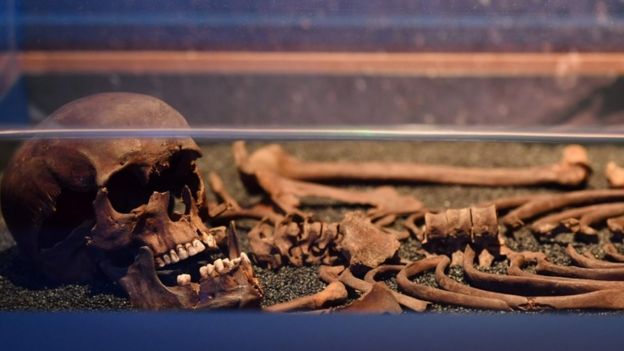 Two finds from the Crossrail project have ended up among the 80 million specimens at the Natural History Museum: a piece of 55-million-year-old amber and two parts of a woolly mammoth jawbone. Both were discovered beneath Canary Wharf.

The bone find could prove to be important, as Jessica Simpson from the museum explains: "They can date the woolly mammoth specimen once it is off display and they might be able to determine when they became extinct in our region.

"The last known woolly mammoths were roaming a small part of northern Siberia about 4,000 years ago."

For Ms Keily, the discovery that will perhaps provide the most significant element of Crossrail's archaeological legacy is the human remains found at Liverpool Street.

DNA testing on teeth found in the 17th Century Bedlam cemetery confirmed the identity of the bacteria behind London's Great Plague for the first time.

"That's an important discovery," she said.

And it's not the only one.

Don Walker, senior human osteologist at the Museum of London Archaeology, analysed some skeletons found at Charterhouse Square in Farringdon. 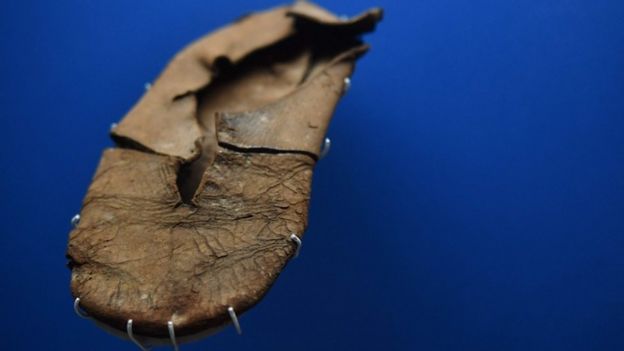 He said of the discovery: "It was important because we found documented evidence of a Black Death cemetery dating to 1348 or 1349."

Isotope, radiocarbon and DNA analysis was performed in an effort to reveal details such as how a person's diet had changed during their lifetime and where they were likely to have lived.

Mr Walker said: "We don't know much about how infectious diseases interacted with people in the past.

"If we can understand the evolution of infectious diseases such as the plague that will help us understand how diseases will behave in the future."

Asked what the impact of the Crossrail excavations would be, he said: "I think it goes beyond archaeology and I'm certain there will be some benefits for future medical work as well." 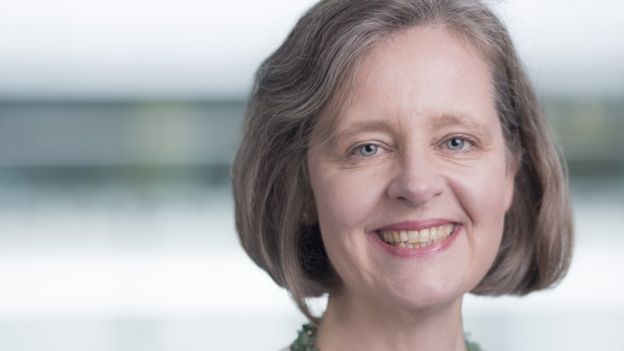 Curator Jackie Keily: "We've managed to take a slice down through London"

Dr Piers Mitchell from Cambridge University is president of the Paleopathology Association and was part of the team that found Richard III's skull in a Leicester car park.

Asked if Crossrail would go on to be viewed as a significant project in British archaeology, he said: "The problem with Crossrail is you only get a little vertical shaft, a little box to excavate.

"That gives you a little vignette of life in the past. It's a little bit frustrating.

"They've got lots of little circles and they are trying to interpret London from that."

But he added: "Only time will tell. If interesting papers are published and we learn more about diseases of the past and how they are changing, it's going to be a good resource to teach students with."

Jay Carver, lead Crossrail archaeologist, believes the project will be held up as an example of how developers, engineers and archaeologists can work together and share finds with the community.

He said: "Every 10 years there's a mega-project that involves a lot of archaeology; previously there was the Eurostar tunnel and then Terminal 5 at Heathrow.

"With each project we are developing the way we work with construction and engineering. In the past archaeologists and engineers have been at loggerheads.

"I think it's been a really successful project."

And it's a project that is set to continue, with plans in place for Crossrail 2, the proposed north-south line from Epsom in Surrey to Broxbourne in Hertfordshire. 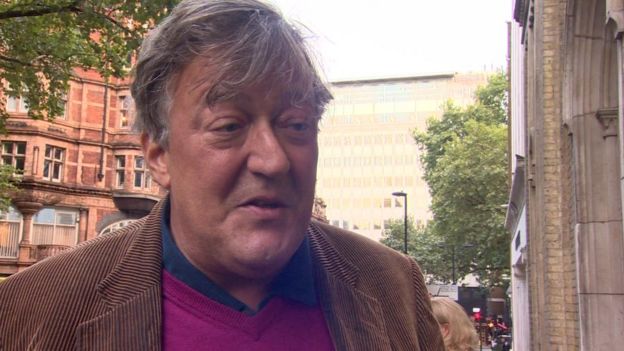 But wherever there are huge infrastructure projects of this kind, there are difficult decisions to be taken, such as the possibility the Curzon cinema in Soho might have to make way for a new ticket hall.

Stephen Fry has said he does not want to be a "numby" - not under my backyard - but, as a supporter of the Curzon Soho, objects to the plans as they stand.

And the Victorian Society warns Wimbledon is among the areas that face losing important architecture to Crossrail 2's bulldozers - although a Transport for London spokesperson said: "Demolition is always our last resort."

Back in east London at the Museum of London Docklands - a stone's throw away from where engineers are putting the finishing touches to the Canary Wharf Crossrail station - Jackie Keily reflects happily on the impact of the several years of excavations.

"It's been an amazing project," she said.

"To be able to archaeologically take a slice through London east to west is pretty amazing."

Some of the finds as they were reported 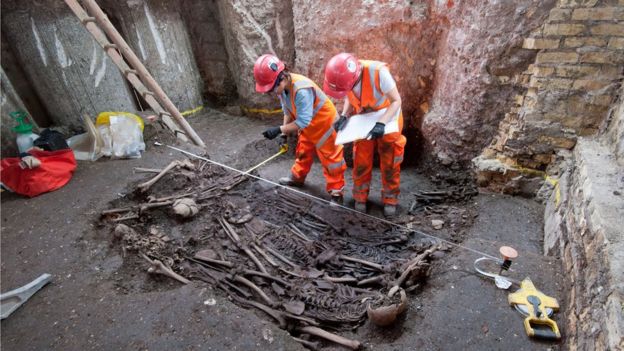 Tunnel: The Archaeology of Crossrail runs from Friday 10 February to 3 September at the Museum of London Docklands.

The archaeological legacy of the Crossrail excavations - BBC News