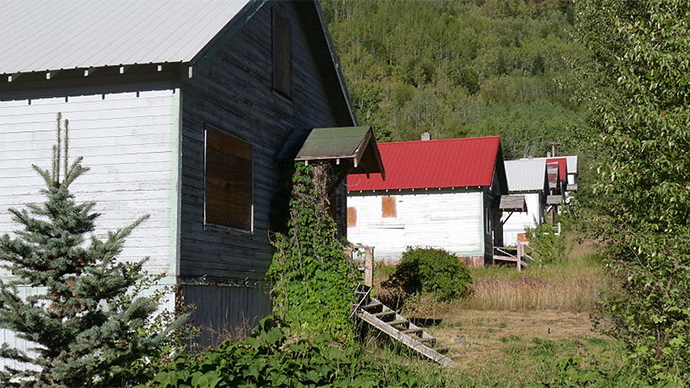 A 50-acre ghost town Bradian in Canadas British Columbia province is up for sale with the cost of all its 22 buildings now having dropped  to a mere $995,000.

Located 4 hours from Vancouver, the mining town in the South Chilcotin Mountains has just four residents. Still it can boast 22 buildings on over 50 acres of land, with phone and power lines intact.

It was one of the many towns, dotted all around the Bridge River Valley, which reached its glory in the 1930s gold rush. But nothing lasts, and its remaining residents put it on sale in February 2010. At that time the price was higher at $1.3 million.

However, even the promises of one of the best snowmobiling areas in B.C. and a once in a lifetime opportunity didnt save the realtor from having to bringing down the price.

John Lovelace is selling the property for Tom and Katherine Gutenberg from Vancouver, who  in their turn  bought it in 1997 and have used it as a summer vacation site with their kids ever since.

"It was disappearing at the rate of several houses per year, people would simply dismantle them for parts," Tom told Pique magazine back in 2010, when the couple decided to pass the baton of the town keeping. "It's important for us to keep that sort of thing and that really was my intent, to save that piece of B.C. history." As Bradian has been on sale for over 4 years, Lovelace has received dozens of inquiries, but most would-be purchasers shy away as they realized the costly perspectives of owning a town that needs to be constantly upgraded.

Its an ongoing initiative for us. The problem is that, for someone to get involved, its going to involve some imagination and somebody with deep pockets  thats always been the issue, Lovelace told The Province.

At the end of the road, theres a big reward, as there would be in most things in life, the realtor said. In this one, theres the magic of owning a ghost town.

Re: Whole Canadian ghost town for salefor less than $1 million

Aug 24th, 2014
if I won the big one, it would be a guarantee that I would buy it and fix it. My wife's Father went there for work many many moons ago and they lived there for a few years. More than a few of her family grew up there.