Blackleaf
#1 Aug 19th, 2013
The actress Maxine Peake (from my hometown of Bolton), who has appeared in such top shows as Shameless , Dinnerladies , Silk and The Village , has led the 194th anniversary commemorations of the Peterloo Massacre.

The Peterloo Massacre occurred at St Peter's Field in Manchester on 16 August 1819, when cavalry charged into a crowd of 60,000–80,000 that had gathered to demand the reform of parliamentary representation, leaving 15 dead and 400-700 injured. The massacre was given the name Peterloo in ironic comparison to the Battle of Waterloo , which had taken place four years earlier. 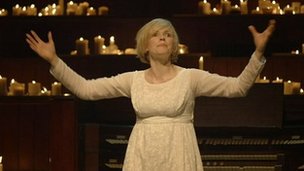 Actress Maxine Peake has read out the names of the victims of a Georgian massacre as part of an annual commemoration in Manchester.

The event marked the anniversary of the 1819 Peterloo Massacre, when hussars charged reform campaigners in St Peter's Field, leaving 15 dead.

The reading was organised by the Peterloo Memorial Campaign.

It took place under a plaque commemorating the massacre on Peter Street.

The charge, which also saw 700 injured, was commemorated in Percy Bysshe Shelley's protest poem The Masque of Anarchy.

Peake performed a recital of the poem as part of the Manchester International Festival. Peake said it had been a privilege to read the names out.

"It is very moving and I still get quite angry about it - there is something about innocent people who came here for the day," she said.

The Peterloo Massacre (or Battle of Peterloo) occurred at St Peter's Field, Manchester , England, on 16 August 1819, when cavalry charged into a crowd of 60,000–80,000 that had gathered to demand the reform of parliamentary representation.

The end of the Napoleonic Wars in 1815 had resulted in periods of famine and chronic unemployment, exacerbated by the introduction of the first of the Corn Laws. By the beginning of 1819 the pressure generated by poor economic conditions, coupled with the relative lack of suffrage in northern England, had enhanced the appeal of political radicalism. In response, the Manchester Patriotic Union, a group agitating for parliamentary reform, organised a demonstration to be addressed by the well-known radical orator Henry Hunt.

Shortly after the meeting began, local magistrates called on the military authorities to arrest Hunt and several others on the hustings with him, and to disperse the crowd. Cavalry charged into the crowd with sabres drawn, and in the ensuing confusion, 15 people were killed and 400–700 were injured. The massacre was given the name Peterloo in ironic comparison to the Battle of Waterloo, which had taken place four years earlier.

Historian Robert Poole has called the Peterloo Massacre one of the defining moments of its age. In its own time, the London and national papers shared the horror felt in the Manchester region, but Peterloo's immediate effect was to cause the government to crack down on reform, with the passing of what became known as the Six Acts. It also led directly to the foundation of The Manchester Guardian (now The Guardian), but had little other effect on the pace of reform. In a survey conducted by The Guardian in 2006, Peterloo came second to the Putney Debates as the event from British history that most deserved a proper monument or a memorial. Peterloo is commemorated by a plaque close to the site, a replacement for an earlier one that was criticised as being inadequate as it did not reflect the scale of the massacre.

Re: Actress leads commemorations of Peterloo Massacre, 194 years on

Re: Actress leads commemorations of Peterloo Massacre, 194 years on