Blackleaf
#1 Aug 26th, 2019
Futuristic plans for the Royal Marines which would see commandos being carried into battle on silent 'flying wings' while wearing 'invisible' suits have been unveiled by the Royal Navy.
Young engineers from the UK Naval Engineering Science and Technology Forum were asked to create ideas to kit out a mid-21st century assault by the marines on an enemy missile site perched on a clifftop.

The graduates, representing a number of leading defence, technology and engineering firms, were briefed to use existing and future tech for the imagined scenario.

Ideas dreamed up by engineering graduates at Royal Marine Commando Training Centre in Lympstone
Landing plane replacements, battlefield survival tech and deadly weapons, all designed by participants
Of the ideas, Royal Marines Commandant said if 20 per cent were invented it would give them a cutting edge
Power supplied by solar and motion energy from Marine kit while 'holograms' could distract the enemy

Futuristic plans for the Royal Marines which would see commandos being carried into battle on silent 'flying wings' while wearing 'invisible' suits have been unveiled by the Royal Navy.


Young engineers from the UK Naval Engineering Science and Technology Forum were asked to create ideas to kit out a mid-21st century assault by the marines on an enemy missile site perched on a clifftop.


The graduates, representing a number of leading defence, technology and engineering firms, were briefed to use existing and future tech for the imagined scenario. 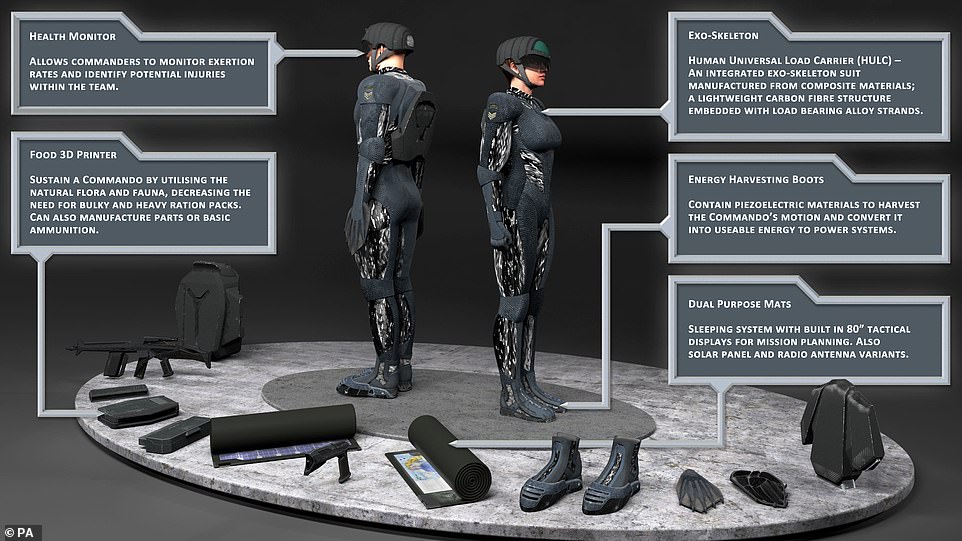 Shown above is a full view of the array of kit devised by the graduate engineers at the Commando Training Centre in Lympstone. On the head of the Marines, graduates suggested a health monitor to keep track of the physical stress each Marine was under and the ability to share information with the rest of the team about injuries. An energy harvesting mat (pictured front centre) is a 'sleeping system' with built in solar panels and a screen for 'mission planning.' Energy harvesting boots (pictured on the Marines' feet) would harvest their motion, converting it into usable energy for later applications. The fourth gadget from the left is a food 3d printer which would 'sustain a commando by using natural flora and fauna' 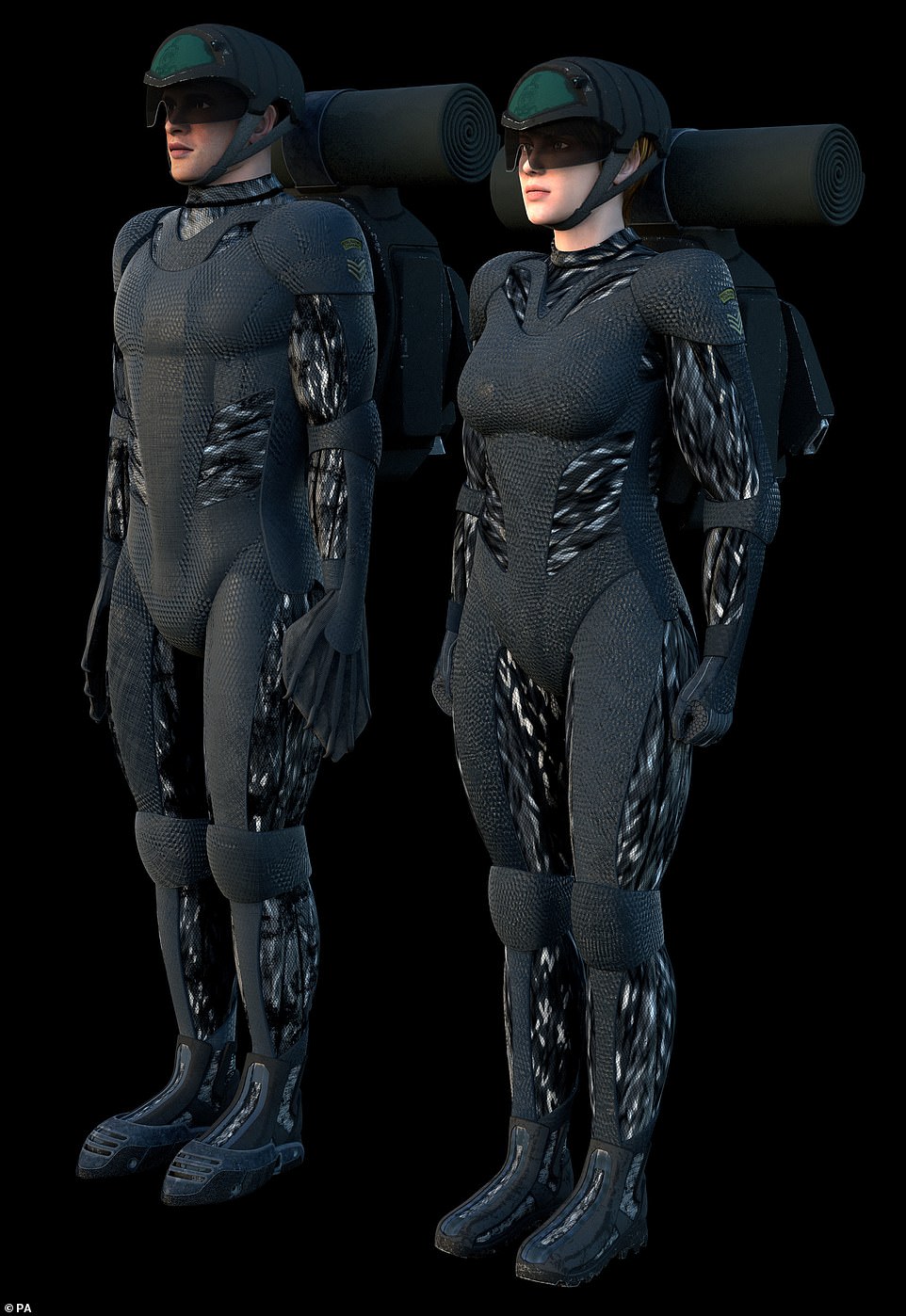 This handout photo from the Royal Navy shows a design concocted by engineer graduates who visited the Commando Training Centre for Royal Marines in Lympstone, England. It shows exo-skeleton suits which would allow the wearer to perform super-human feats like scaling cliffs and blending in with the environment. The slightly shimmering suits above are likened to 'chameleon suits' as they would allow the user to camouflage themselves like a chameleon 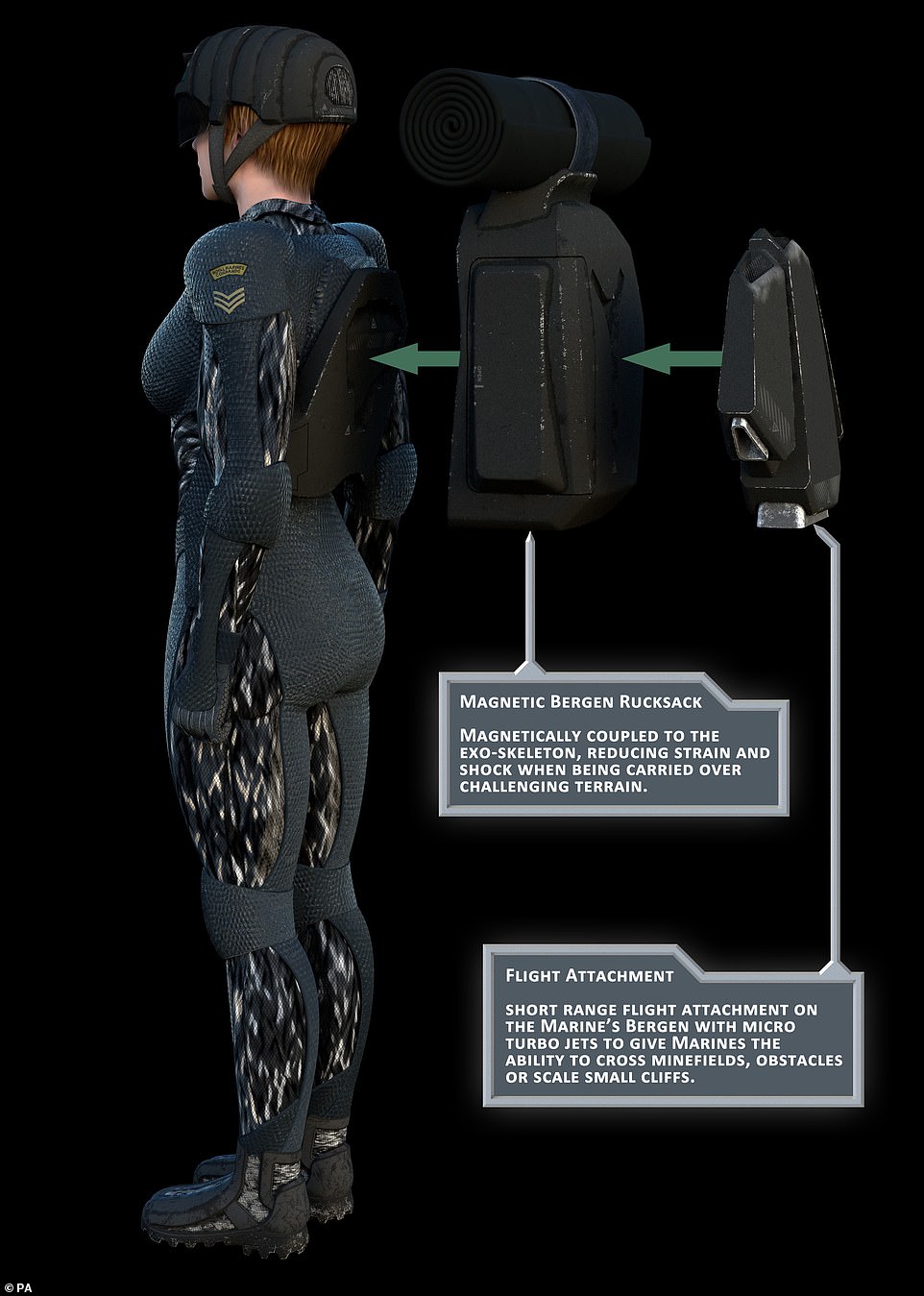 The picture above, a profile view of the exoskeleton suit, shows the additional pieces included. The magnetic backpack would latch on to the suit, reducing strain and shock on the wearer, making it easier to carry large loads. The Royal Navy said they would hope to deploy some of these pieces in the future 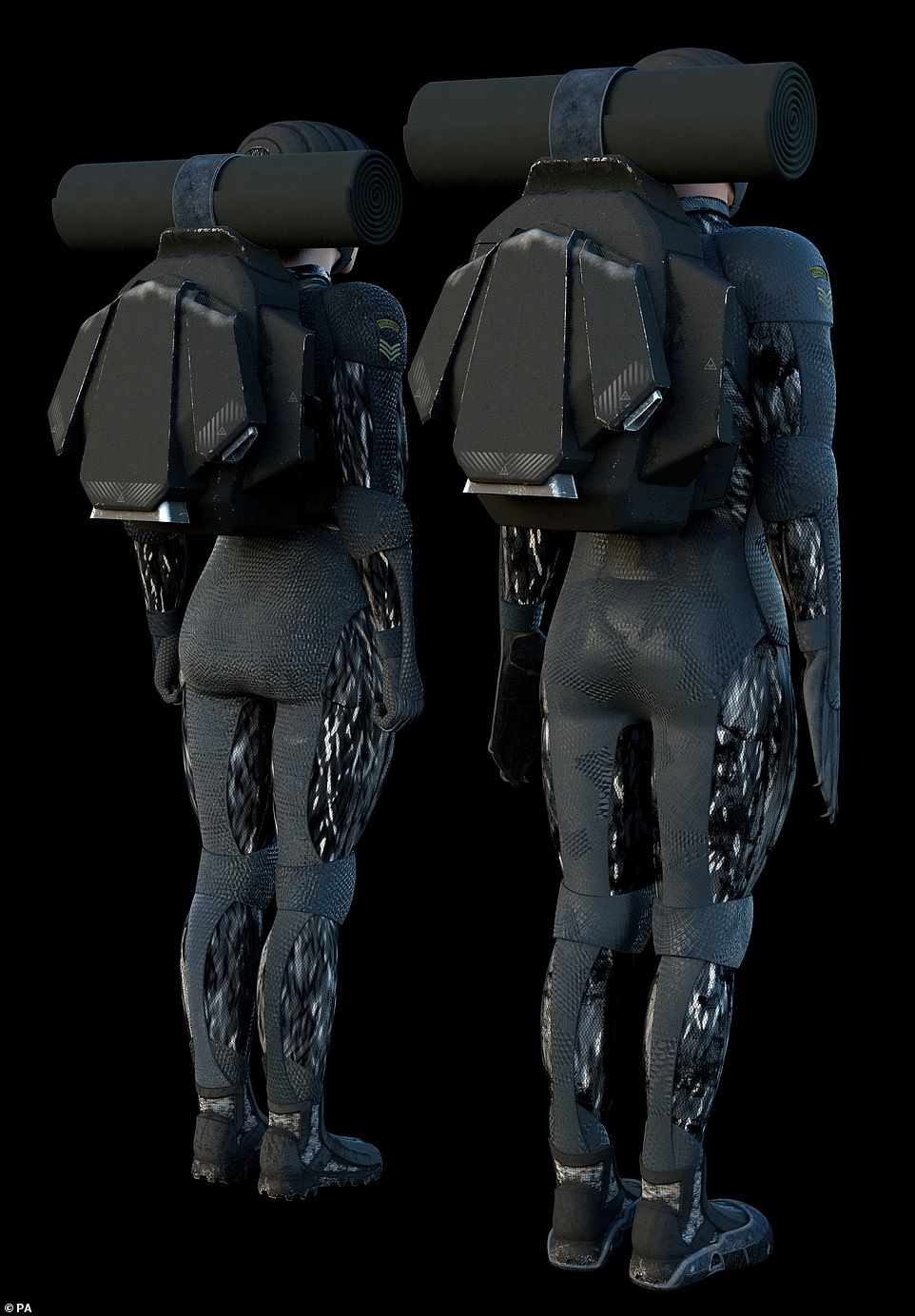 As armed forces operate over difficult terrain, strain can reduce a soldier's effectivity in the field. A flight attachment is shown which includes 'micro turbo jets,' allowing the Marine to fly over minefields, obstacles and scale small cliffs

The designers spent a day at the Commando Training Centre at Lympstone, near Exeter in Devon, to understand what it takes to become a Royal Marine before embarking on the project.


The ideas included exo-skeleton suits covered by a chameleon-like skin allowing wearers to perform super-human feats such as scaling cliffs effortlessly while invisibly blending in with environment.


Other suggestions included ekranoplan 'flying wings' replacing landing craft which can skim across waves at hundreds of miles an hour, as well as holograms of marines to be used as a decoy for the enemy. 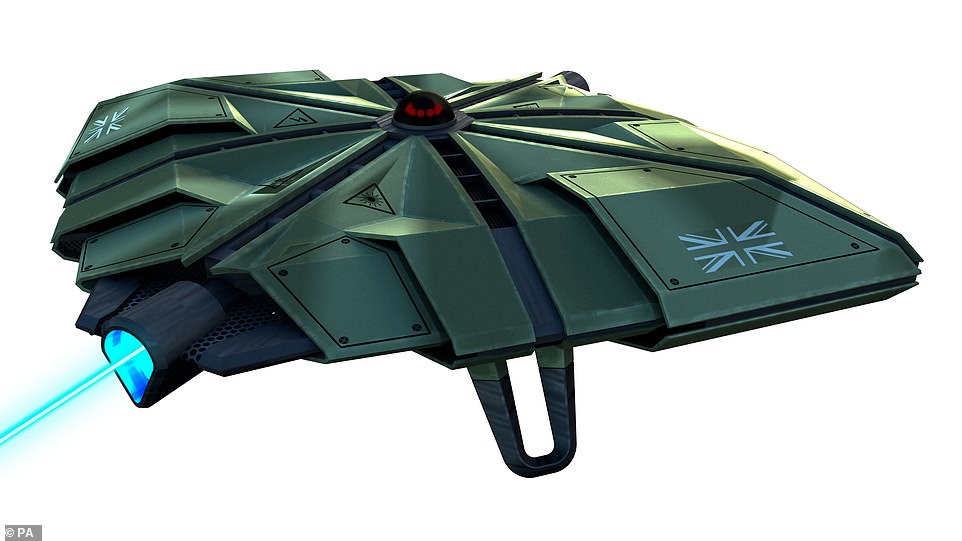 Engineering graduates designed this small intelligence drone which they said would feed the latest information directly to the Commandos on the ground, through a headset, which would give them a cutting edge while out in battle scenarios 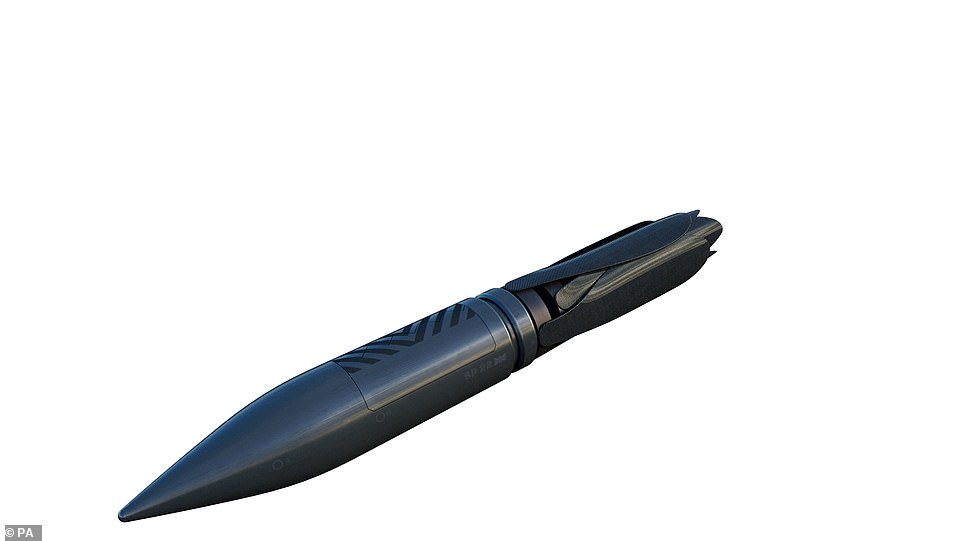 Pictured above is a design by the engineering graduates who visited the Commando training centre in Lympstone. The sycamore pod projectile can be seen with its wings closed, allowing it to travel quickly through the air 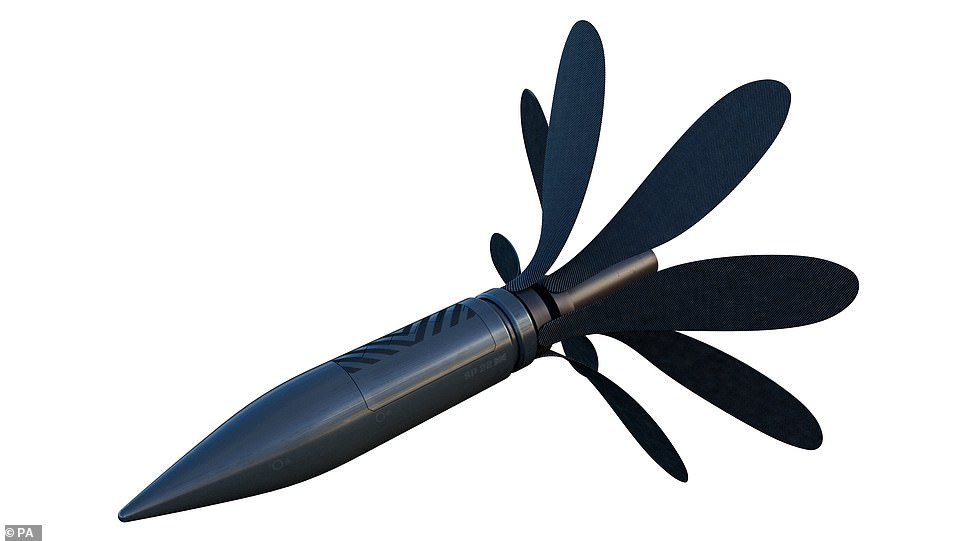 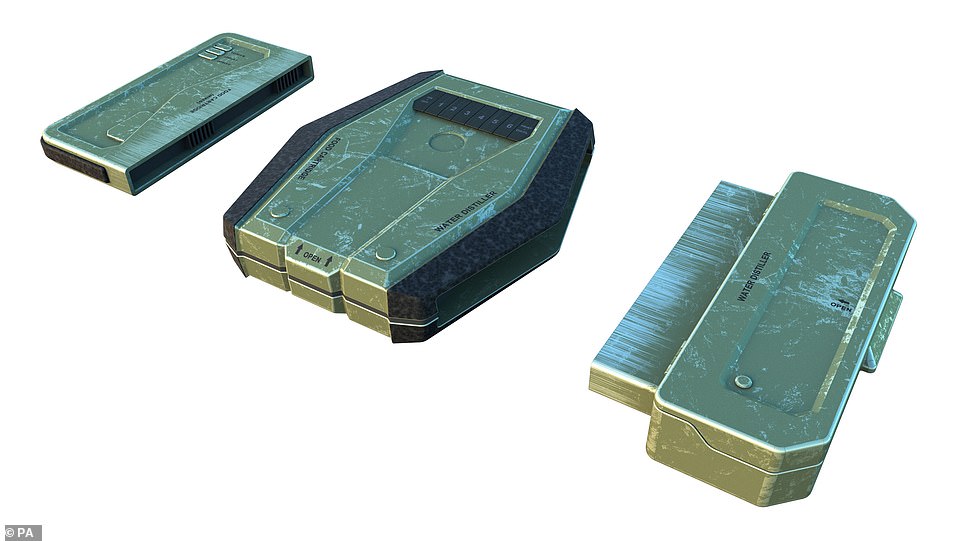 Many of the pieces designed by the graduates at the Royal Marines Centre in Lympstone focussed on making it easier for Commandos to live while out in the field. The above design is a water distiller which would enable to soldiers to turn dirty water from lakes and rivers into a potentially life saving drink which could keep the Marines alive for a longer period of time 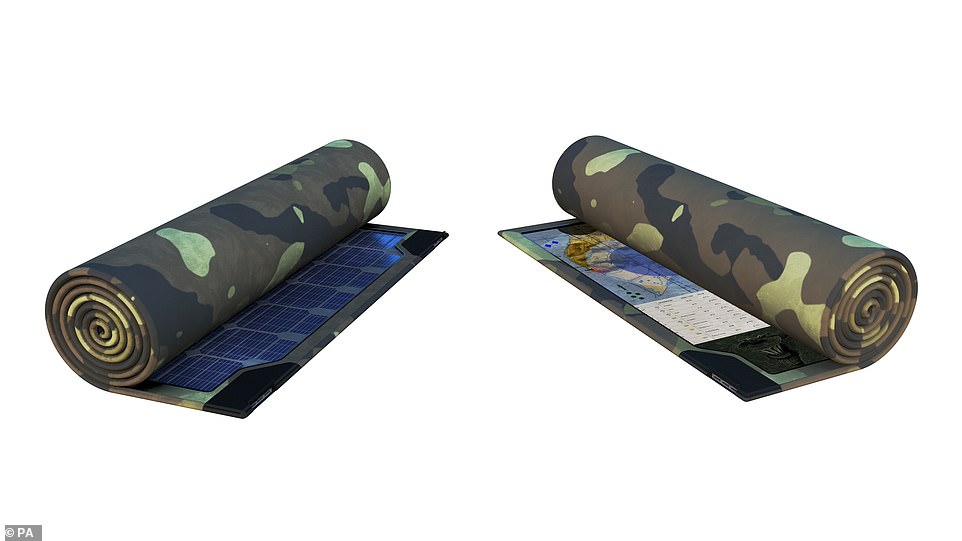 The sleeping mats, pictured above, were devised with solar panels to power other pieces of kit and to work as a tactical display screen for showing mission information and planning offensive and defensive attacks 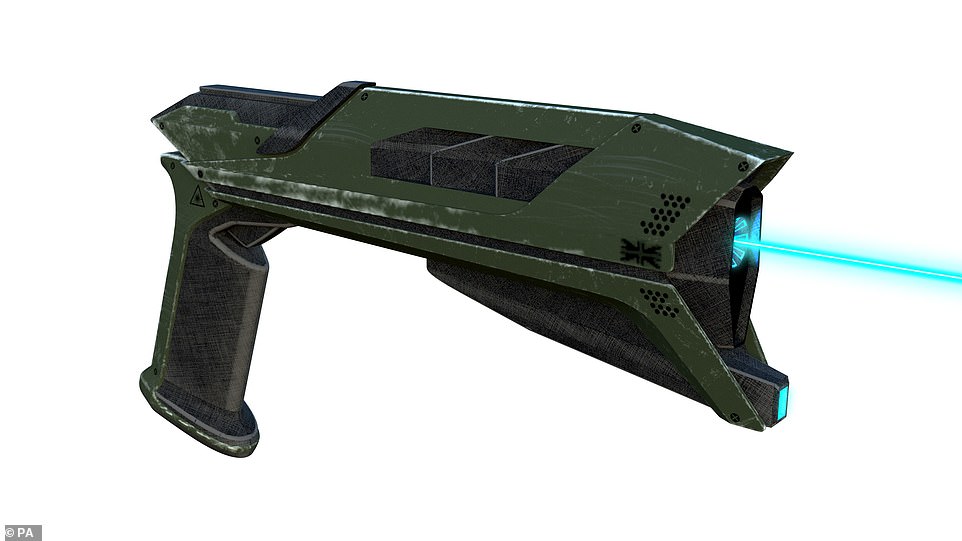 The engineering graduates created a number of weapons which the Royal Navy said it would hope to deploy in the future. They said that even if only 20 per cent of the designs turn into a reality, they will be the cutting edge of military technology. The pistol pictured above, appears to be firing a laser from its barrel 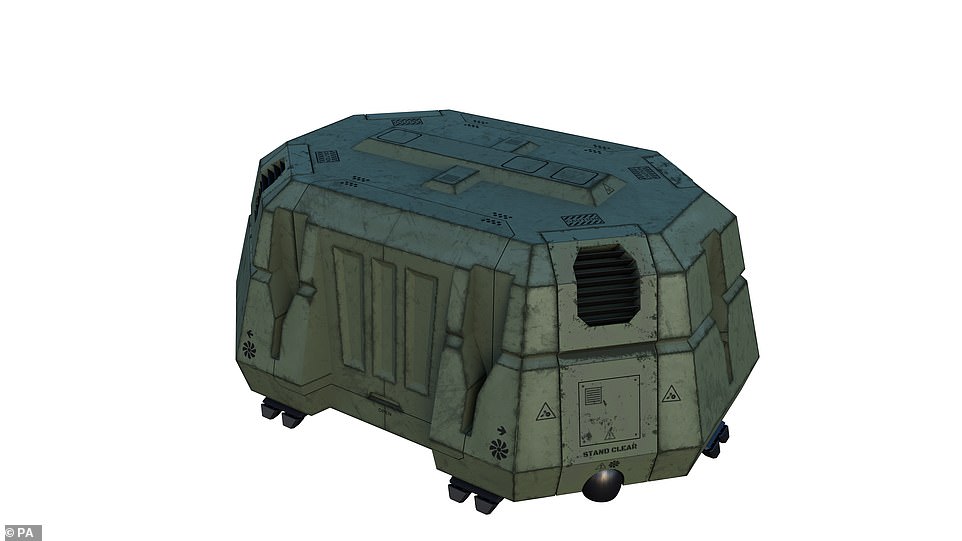 Pictured above is a 'grunt drone' which would be used to perform heavy lifting, making the Commando's lives easier 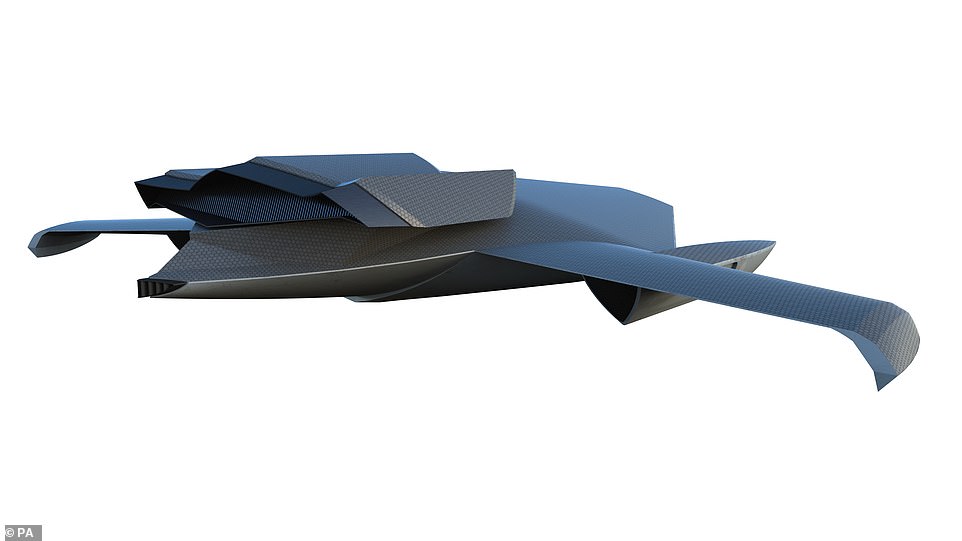 This glider-type aircraft is called a ekranoplan and is envisaged to replace the traditional landing craft. It would silently skim across waves at hundreds of miles per hour and would negate the need for a large carrier disembarkation which is risky 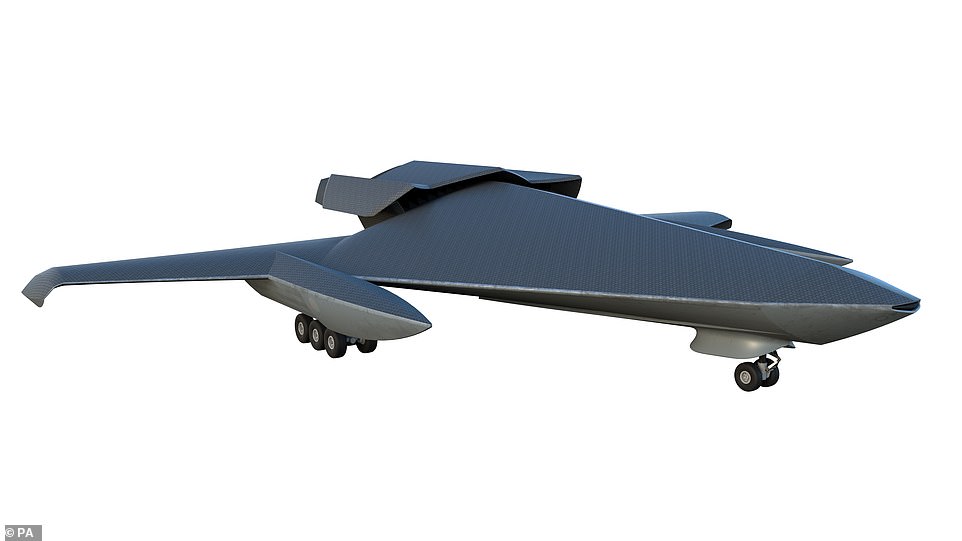 Young engineers from the UK Naval Engineering Science and Technology Forum were asked to create ideas to kit out a mid-21st century assault by the marines on an enemy missile site perched on a clifftop. This ekranoplan would help Marines infiltrate a battlefield quickly and stealthily 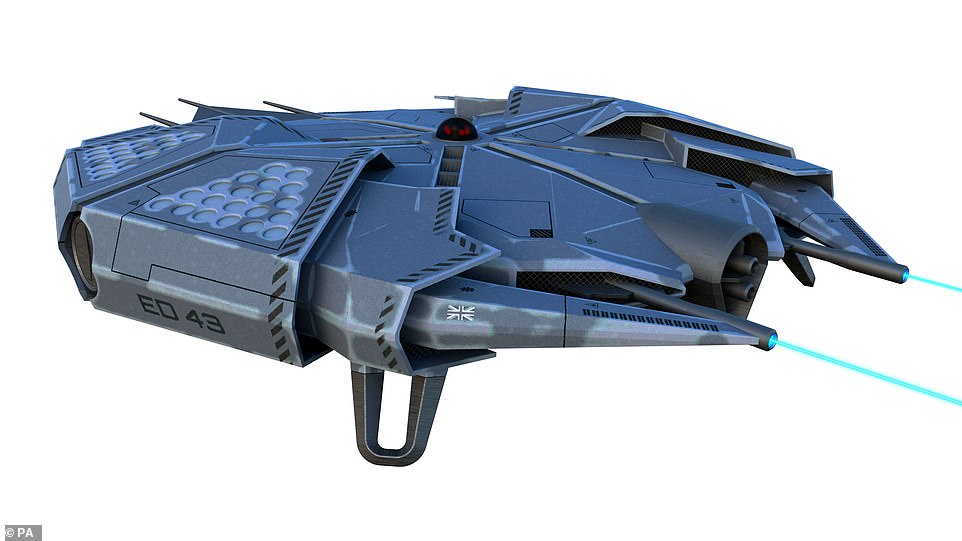 Another prototype plan for a small intelligence drone that was drawn up by the graduates. This one, however, appears to also have the capability of shooting lasers while scanning environments 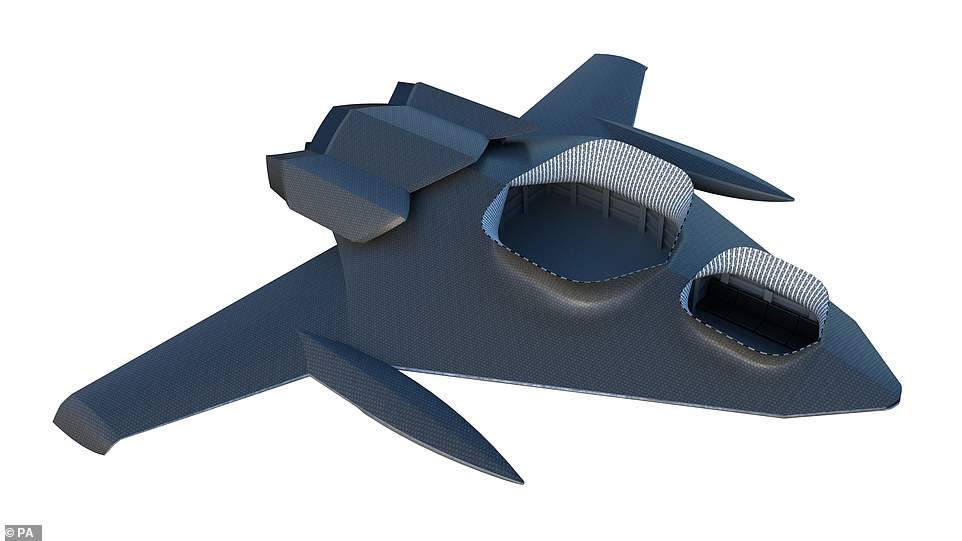 Those selected to design the outlandish military inventions represented a number of leading defence, technology and engineering firms. They were asked to be creative, using future technology ideas along with existing gadget components 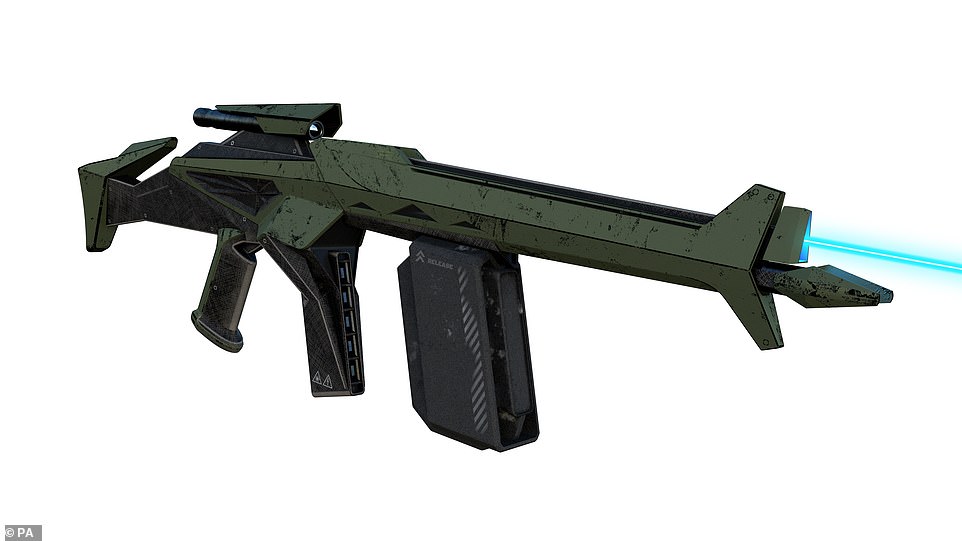 This weapon, which the graduates called a 'Dual Mode Rifle,' appears to be fitted with a dual magazine system and what looks like a cattle prod at the front. It can also fire a laser which from scenario plans suggests it could be severely damaging 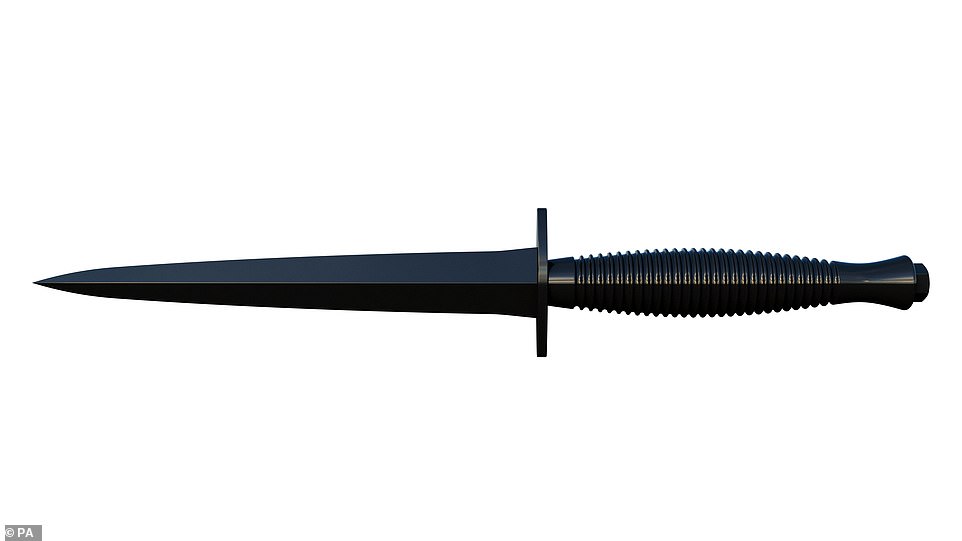 The traditional dagger is the most traditionally recognisable of the weapons envisaged by the engineering graduates who attended the Lympstone training centre. It appears just like a regular damage though a little more streamlined

The marines would also be kitted out with helmets with head-up displays providing the latest battlefield intelligence and health and fitness levels, as well as boots which harness energy from running to power equipment.


Drones would be used to provide local information, with larger 'grunt' drones deployed to drop ammunition and supplies while armed with laser guns.


The commandos would also be deployed behind enemy lines in special pods fired from ships using electro-magnetic rail guns, and other equipment would include sleeping mats that can double as solar panels, and portable 3D printers which would produce food in the field. 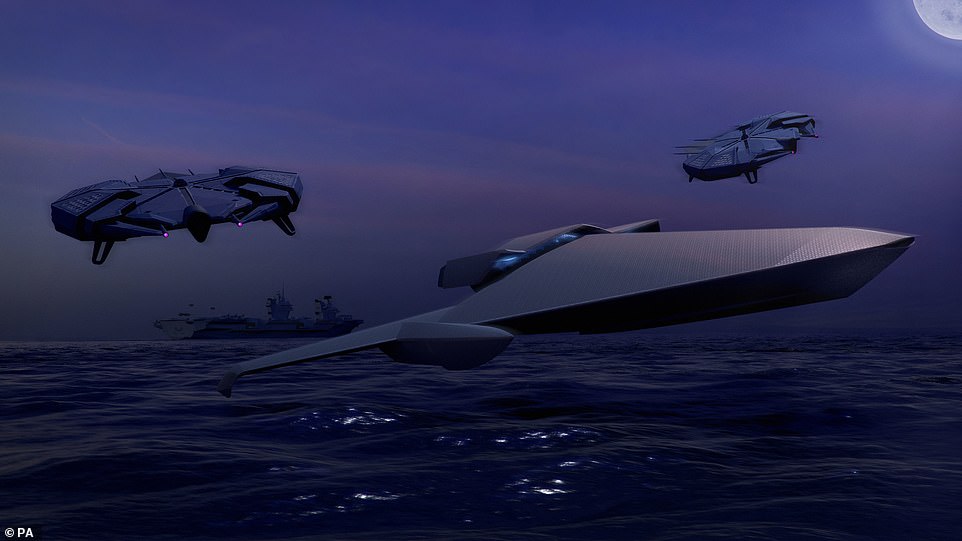 Along with the designs, the graduates dreamt up graphic scenarios of their creations performing on the battlefield. Here, an 'ekranoplan' (pictured front centre) and two intelligence units (back left and right) can be seen flying just above sea level after leaving a large vessel in the background behind them 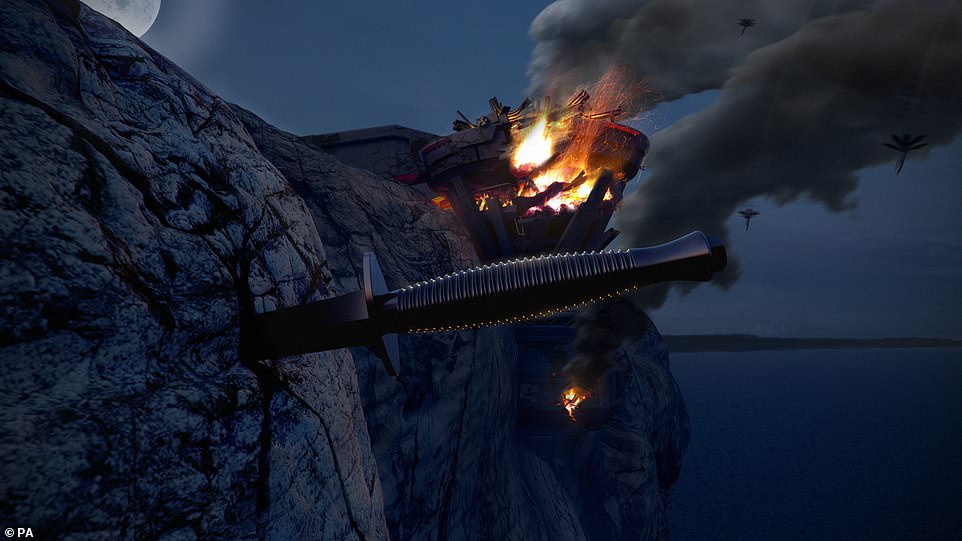 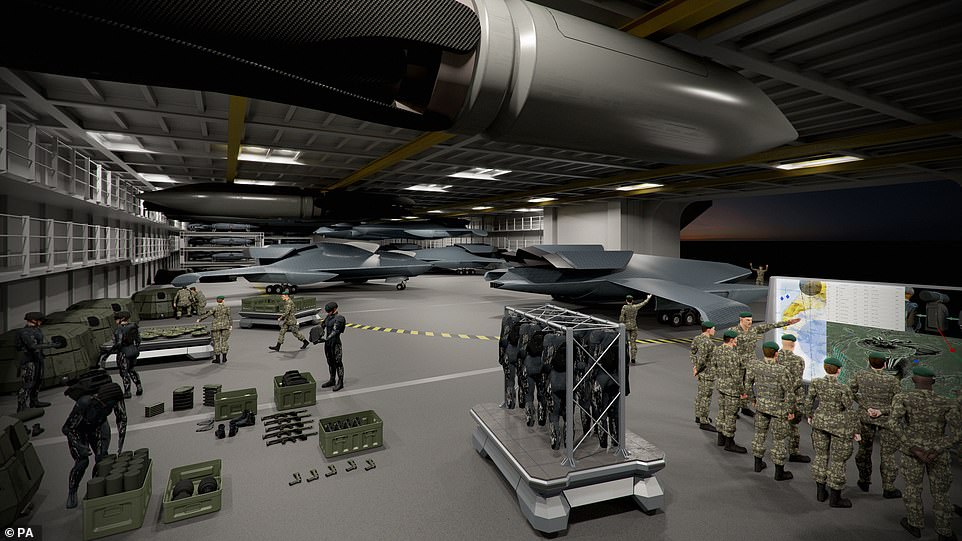 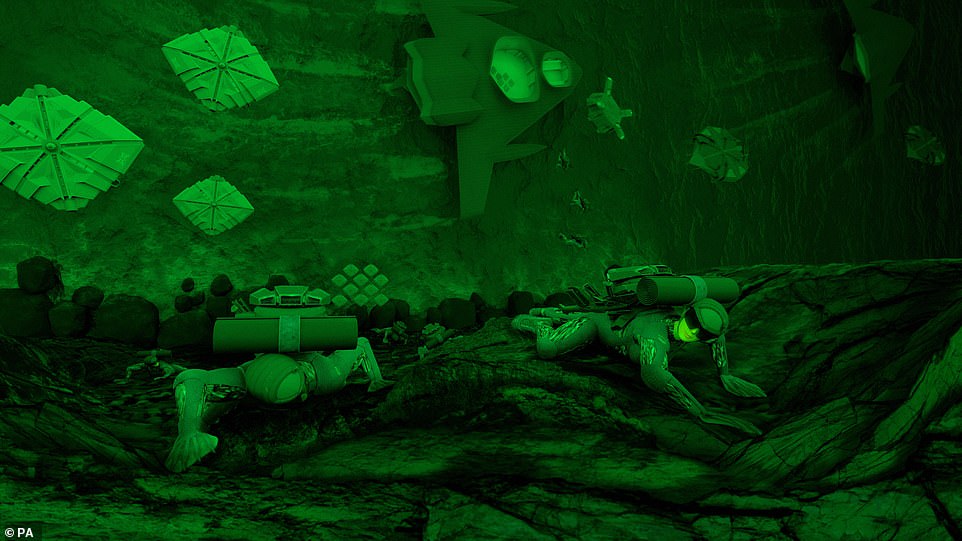 Above is a scene showing how the exoskeleton suits could be used by Royal Marines Commandos on the battlefield. The Marines scale a cliff in their chameleon suits after disembarking from an ekranoplan which is on the ground below 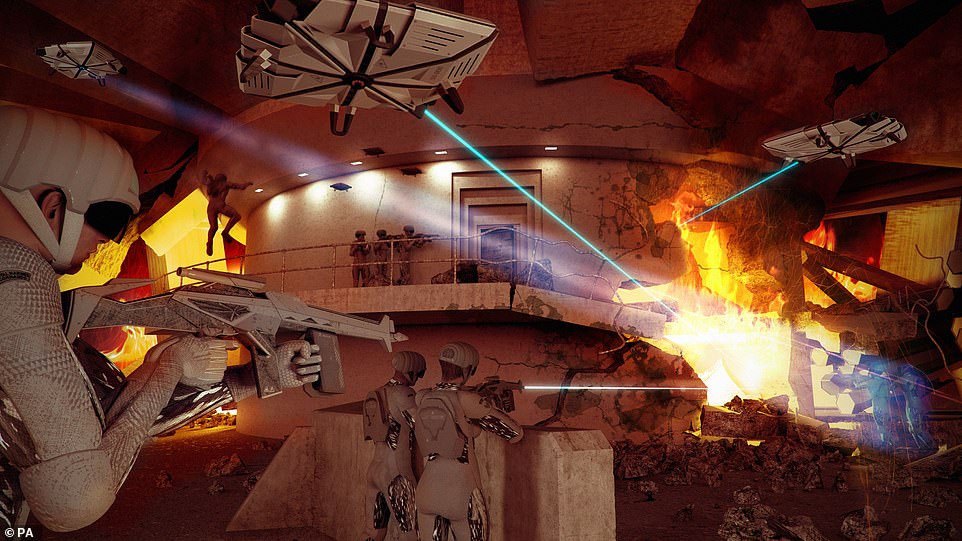 A devised scene shows Commandos fully blended in to their surroundings by their exoskeleton suits and their accompanying intelligence drones help them to blast holes in the walls of an enemy installation. The lasers dreamed up by graduates seem very powerful

Defence Secretary Ben Wallace said: 'It is tremendous to see the pioneering visions of young British engineers push the boundaries of technology and conventional thought.


'The Royal Marines have a long history of delivering unmatched capabilities across a wide range of scenarios and theatres.


'As global threats continue to evolve and become more complex, it is vital that we encourage our armed forces and industry to work together to ensure our fighting forces strengthen their operational edge.'


Brigadier Matt Holmes, Commandant General Royal Marines, said: 'Our objective has been to envisage radical capabilities to make us more agile and lethal, while being able to operate in a complex digital and networked future environment.


'We can't say how much or how quickly the reality of these visions will come to fruition. But what we can say is that if only 20% of these ideas come to reality then we will be at the cutting edge of tomorrow's technology.' 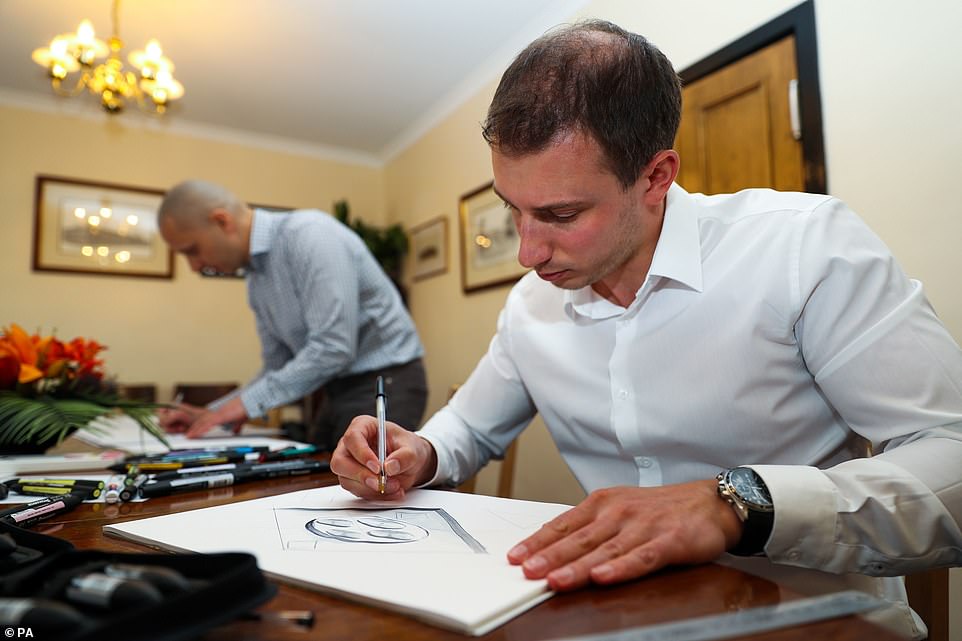 An engineering graduate (pictured above) can be seen dreaming up ideas for the future of the Royal Marine's military technology. The Commandant of the Marines said that they were always hoping to be a step ahead in a 'complex digital and networked future environment.' He said they have always envisaged 'radical capabilities to make us more agile and lethal' 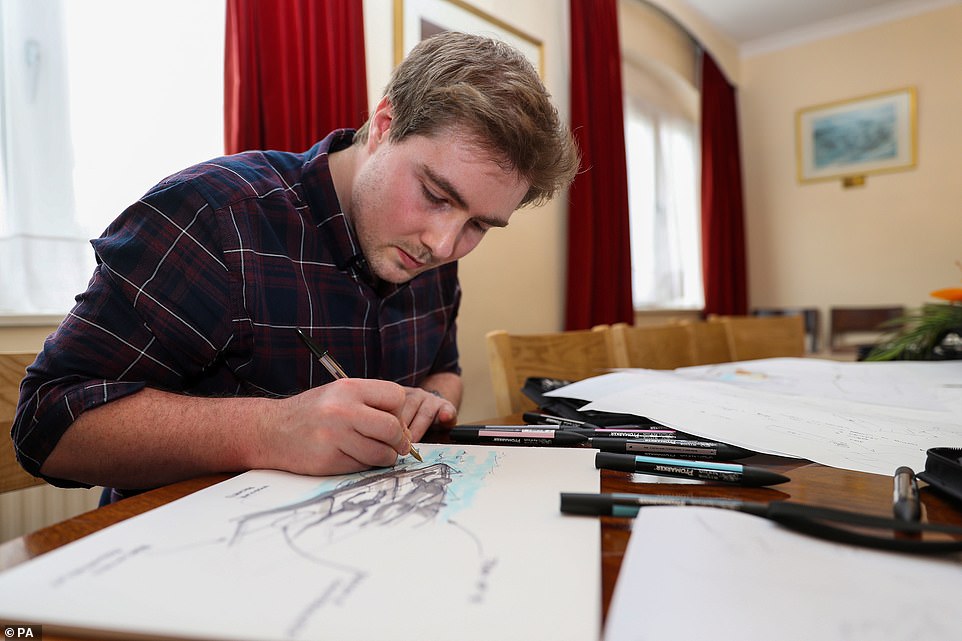 Your barak buddie o'bummer gave them the power...

...not to mention the right to do animals in the bunk house.

Oh, I bet the modern lil LGBQ buggers would luv to do that...

Your barak buddie o'bummer gave them the power...

...not to mention the right to do animals in the bunk house.

You seem to display all sorts of fetishes.

I just C and P the gruesome details.

I just C and P the gruesome details.

You really need to ride the ole buck board into town, from time to time. Cabin fever is putting the zap to what's left of your brain.