NEW YORK (CBSNewYork/AP)  Staten Island residents are bracing for what they expect to be a crowd in the thousands Saturday for Rev. Al Sharptons march to protest the police custody death of Eric Garner.

The We Will Not Go Back march and rally is expected to begin at 11 a.m. at 204 Bay Street across from Tompkins Park.

No parking signs are already up along the march route where 15,000 people are expected to fill the streets in the neighborhood Garner called home.

This is a defining moment in Staten Islands history, resident Gary Phaneuf told CBS 2s Jannelle Burrell. This is definitely a tipping point when it comes to certainly race relations on Staten Island 

The outrage has not subsided, Sharpton said. This is not going away.

We need a lot of marchers to march and get justice for my husband, Garners widow, Esaw Garner, said.
No police officer has the right to be an arresting officer a judge a jury or an executioner for anyone, Staten Island resident Michael Price told Burrell.

Instead of the original plan of marching over the VerrazanoNarrows Bridge, a bus caravan will drive protesters from Brooklyn and drive across in the so-called justice caravan.

Another caravan will depart from the Goethals Bridge in New Jersey.

The plan is to march past the spot where Garner died on Staten Island last month, past the 120th precinct house and end at Richmond Terrace and Hamilton Avenue, where the protesters will rally.

Sharpton will be leading the march and has vowed that unlike the protests seen in Missouri, his march will be peaceful.

Probably be another riot over another black criminal who the cops regretfully killed in self-defence after he threatened their lives.

He had it coming.

Oct 29th, 2016
Erica Garner, the daughter of Eric Garner, a black man who was killed by a NYPD officer in 2014, is slamming Hillary Clintons campaign over leaked emails from the server of John Podesta, the campaigns chairman.

I know we have Erica Garner issues but we dont want to mention Eric at all? I can see her coming after us for leaving him out of the piece, wrote Nick Merrill, a spokesman for the campaign, in the email leaked from Podestas private server and posted on WikiLeaks.

The email correspondence was a discussion about whether the death of Garners father should be used in a Clinton opinion piece for New York Daily News on gun violence.

Several Clinton staffers ― including national spokeswoman Karen Finney , senior policy advisor Maya Harris and speechwriter Benjamin Krauss ― advised against using Eric Garner in the op-ed (which was never published) since his death was a result of police brutality and not gun violence.

He was killed when New York police officer Daniel Pantaleo put him in an illegal chokehold. A grand jury later decided against indicting Pantaleo for Eric Garners death.

Fighting gun violence is easier and more palatable than fighting racist police violence, Garner said. Its the same as saying All Lives Matter to me. ... If we eliminate guns we know theyll choke black people, drag black people behind trucks. Theyre still hanging Black people now, theyll still be putting Sandra Blands (sic) in jail for being black. Tamir Rice will still be a grown, threatening man in their eyes and black people will still be super predators.

We cannot allow these folks to be confused or to forget that racist police violence is real, she added. 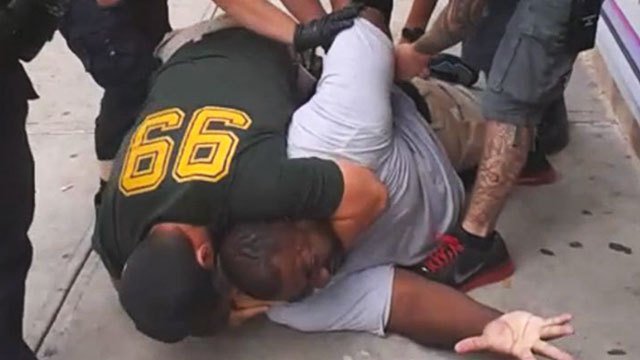 Oct 29th, 2016
Of for f*ck sakes, Erica Garner is high. This isn't racism. The cops do that kind of sh*t to White people, Black people, Brown people, Latino/Hispanic people and Natives.
All this BLM crap does is detract from the real problems in poor, Black communities. When you look at the stats of who is killing Black people, killed by cop represents the smallest group.
BLM is a racist, anarchistic organization. I've said it before but they might as well call themselves OBLM; ONLY Black Lives Matter. Apparently though, Black lives only matter when one is killed by a cop.

Oct 29th, 2016
What if they held a protest march and nobody came? Would the media still report it?

Aug 20th, 2019
New York police fire officer who placed Eric Garner in deadly chokehold
Reuters
Published:
August 19, 2019
Updated:
August 19, 2019 6:11 PM EDT
New York City students and youth activists participate in a news conference and rally to commemorate the lives of Eric Garner and Delrawn Small, both of whom were killed by police in different incidents, on August 08, 2019 in New York City.Spencer Platt / Getty Images
NEW YORK  The white New York City police officer who used a deadly chokehold on Eric Garner during a 2014 arrest was fired on Monday, five years after video of the encounter fueled nationwide protests against police brutality.
Daniel Pantaleo, 34, was fired two weeks after a department judge found him guilty of reckless assault for using a banned chokehold while trying to arrest Garner, an unarmed black man, on suspicion of selling loose, untaxed cigarettes.
Garners dying words, I cant breathe!, on a Staten Island sidewalk became a rallying cry for the Black Lives Matter movement that aimed to call attention to police killings of unarmed black people.
Police Commissioner James ONeill announced his decision to accept the judges recommendation and fire Pantaleo at a news conference on Monday.
He spoke at length in unusually emotional remarks, saying he had empathy for Pantaleo, who had been following orders from his supervisors to crack down on loose cigarette sales, and that he expected police officers would question his decision.
Ive been a cop a long time, and if I was still a cop, Id probably be mad at me, I would, for not looking out for us, ONeill said, referring to more than three decades he served as a uniformed officer.
Pantaleos use of a banned chokehold on July 17, 2014, even if only for a few seconds, meant that he could no longer effectively serve as a city police officer, ONeill said.
In this case, the unintended consequence of Mr. Garners death must have consequences of its own, he said.
Garners family and civil rights activists said the decision was long overdue. The head of the powerful city police officers union decried what he said was a politicized firing that left officers feeling abandoned.
It is absolutely essential that the world know that the New York Police Department is rudderless and frozen, Patrick Lynch, president of the Police Benevolent Association, told a news conference, standing in front of a department flag that had been symbolically inverted. The job is dead, Lynch said.
He sent a letter to union members telling them to adhere closely to the patrol guide and avoid making arrests until a patrol supervisor has been summoned to the scene unless there was a threat to life and safety.
Mayor Bill de Blasio, a Democrat, had long sought to distance himself from the case. Criticism over how long the process has taken nonetheless dogged him as he campaigns around the country to be the Democratic party nominee in next years presidential election.
There was a fair and impartial process and justice was done, de Blasio told a news conference.
At a news conference uptown with the civil rights leader Al Sharpton, Garners daughter Emerald wore a T-shirt with MURDERER emblazoned across the front.
Officer Pantaleo  well, now I can say Daniel Pantaleo  is a murderer, she said. I wear my emotions on my sleeve and now I wear it on my chest.
Garners family have been frustrated that Pantaleo never faced prosecution and say other officers and supervisors involved in the arrest should also be punished.
Pantaleo, you may have lost your job, but I lost a son, Garners mother, Gwen Carr, told reporters outside the police departments headquarters in lower Manhattan.
NYC cop should be fired for fatal chokehold in Garner arrest, judge rules
Hundreds protest in NYC after cop avoids charges in chokehold death
A grand jury in Staten Island declined to indict Pantaleo on state criminal charges in 2014. The U.S. Department of Justice examined the case for years, but announced in July it would not prosecute Pantaleo, saying there was not enough evidence that he breached Garners rights.
In 2015, New York City paid a $5.9 million settlement to Garners family to avoid a civil lawsuit.
Pantaleo himself has not publicly discussed the arrest, and his whereabouts on Monday were unclear.
Hes away now, and I told him to stay away, Stuart London, Pantaleos lawyer, told reporters, without elaborating. Pantaleo would challenge his firing, London said. Obviously, he is disappointed and upset but has a lot of strength.
http://torontosun.com/news/world/new...hokehold-death

Aug 20th, 2019
Apparently police are not supposed to kill people