24 Claret Gold: Burnley are back in England's top flight after 33 year absence

Blackleaf
#1 May 28th, 2009
On Monday, little Burnley were back in England's top flight for the first time since 1976 (before the creation of the Premiership in 1992, England's highest division was the First Division, which is now known as the Championship and is now the second tier. There are 92 teams in the English league, 20 in the Premiership and 22 in the Championship).

Burnley - who were last English champions in 1960 - is now the smallest town to have a team in the Premiership. Its population of 73,000 could fit inside Manchester United's Old Trafford, and around a half of the entire town was at Wembley to watch the game.

Burnley, nicknamed the Clarets because of the colour of their shirts (they played in their changed strip for this game), totally outplayed the Blades and deserved their win. Sheffield United have still never been promoted to the top-flight via the play-offs. England's fourth largest city was humbled by the small town club.

Also promoted into the Premiership with Burnley are Wolves (who finished top of the Championship) and Birmingham City (who finished second). 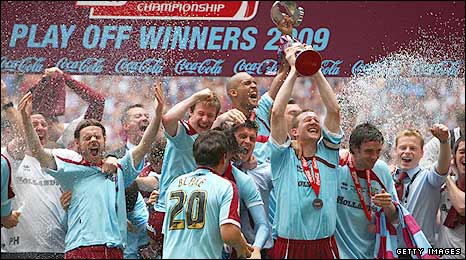 Back in the big time again after 33 years: The Burnley squad celebrate a well-deserved victory at Wembley on Monday

Wade Elliott's sensational strike ended Burnley's 33-year wait for a return to the top flight as they defeated Sheffield United in the Championship play-off final.

Elliott scored with a curling 13th-minute strike into the top corner that was worthy of winning any Wembley occasion.

Indeed, victory for Owen Coyle's team was fully deserved as their 61st game of a long and successful season culminated in promotion to the Premier League for the first time.

The Clarets, founder members of the Football League, played with freedom and ambition - and should have doubled their lead after the break but Nick Montgomery blocked Joey Gudjonsson's hooked shot while Kyle Walker made a superb challenge with Robbie Blake poised to strike.

Burnley created a series of chances and went close from distance several times - in stark contrast to their Yorkshire opponents, whose best hope of an equaliser came from two penalty appeals.

The first, for a challenge on Brian Howard, was debatable, but Christian Kalvenes's crude challenge on Walker after the break was a clear foul.

However referee Mike Dean, whose appointment Blades boss Kevin Blackwell had criticised in the build-up to the match, sided against United on both occasions.

It was a miserable afternoon for the Blades, who saw Jamie Ward red carded late on after he picked up two bookings in four minutes.

But Coyle and his squad, who earlier in the campaign came within minutes of reaching the Carling Cup final, have now ensured their season would not be one of near misses with their Wembley victory.

Elliott's winning goal was the first incident of any note.

The midfielder's surging run through the vacant midfield area roused the Clarets supporters and looked full of possibilities but the chance appeared to have gone when Matt Kilgallon blocked Chris McCann's shot after Elliott laid the ball into his path.

However the clearance ran invitingly to Elliott, who superbly wrapped his foot around the ball and found the top corner of the net beyond the despairing dive of Paddy Kenny.


United, who like their opponents were unchanged from their semi-final second-leg victory, too readily resorted to a direct option and the Clarets central defensive duo of Steven Caldwell and Clarke Carlisle dealt comfortably with high balls into the penalty area.

The Blades mustered no chances of note in the opening half and the nearest they came to an equaliser was the penalty appeal after 15 minutes.

Graham Alexander, a play-off winner at his seventh attempt, did bring down the largely anonymous Howard with a tackle from behind but Dean waved away United's penalty appeals. In any case it was borderline whether the tackle was made in or outside the area.

Burnley, in stark contrast, seemed unaffected by the occasion and expressed themselves in the manner that has won so many admirers this season.

McCann, who limped out midway through the opening half, headed over from a corner while Martin Paterson went extremely close to a second goal with a curling 20-yard strike after cutting in from the right flank.

David Cotterill of Sheffield United is challenged by Graham Alexander of Burnley. Before this match, the last time little Burnley were in the top flight was 1976

And in first-half injury time Clarets substitute Gudjonsson almost connected with a Steven Thompson header back across the face of goal.

The trend continued after the break - a deft Elliott backheel setting Robbie Blake free while Michael Duff came within inches of converting a Thompson header across goal - as the Blades struggled to cope with their opponent's superior invention. 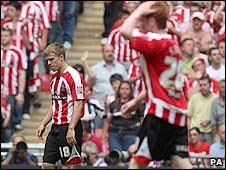 More misery for the Blades with Jamie Ward's late sending off


But for Nick Montgomery's fortunate goal-line block after 55 minutes the Clarets would have doubled their lead.

Gudjonsson, unmarked inside the six-yard box, seemed certain to score as the impressive Thompson headed the ball back across goal towards him but the midfielder's hooked shot lacked power and struck Montgomery, who was facing the other way and knew nothing about it.

Another glorious chance came their way 10 minutes later when Thompson sprung the offside trap, raced down the right flank and squared the ball to Robbie Blake.

The Burnley forward seemed certain to score but Walker, one of United's two impressive young full-backs, made a brilliant covering challenge.

The Blades were again frustrated with a penalty appeal after Kalvenes clumsily barged Walker to the floor. It was a clear foul - and definitely took place inside the area. Their ire increased when substitute Ward saw red after picking up his second booking for a handball but there can be no complaints it was the right decision.

The last few minutes were tense but Burnley closed out the final in relative
comfort, much to the delight of their delirious supporters.

United's misery was compounded when substitute midfielder Lee Hendrie was shown the red card for foul and abusive language after the final whistle.

Goalscorer Wade Elliott with the trophy