Blackleaf
#1 Oct 16th, 2014
The Queen and the Duke of Edinburgh today visited the Tower of London art installation featuring hundreds of thousands of ceramic poppies.

888,246 ceramic poppies are being placed in the moat of the Tower to remember each of the British armed forces personnel who died in WWI. The last poppy is to be "planted" there ceremonially on 11th November.

Hundreds of spectators lined the now dry moat as the Queen laid a wreath to honour the dead. 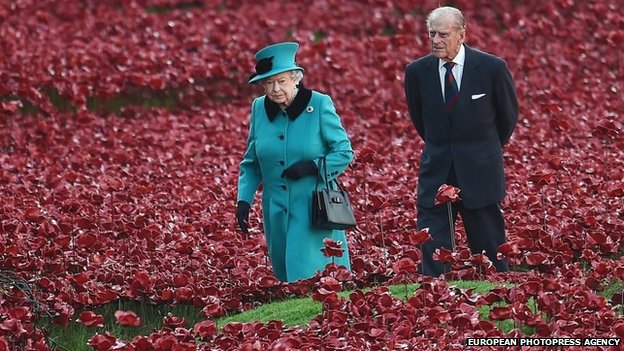 The Queen and Duke of Edinburgh have paid tribute to World War One personnel at a Tower of London art installation featuring thousands of ceramic poppies.

The Queen laid a wreath at the Blood Swept Lands And Seas Of Red exhibit, where each poppy commemorates a fallen WW1 serviceman and woman.

By Armistice Day, there will be 888,246 ceramic poppies, one for each British death during the War.

The Duke and Duchess of Cambridge and Prince Harry visited in August.

Hundreds of spectators lined the perimeter of the tower's moat during the royal visit. 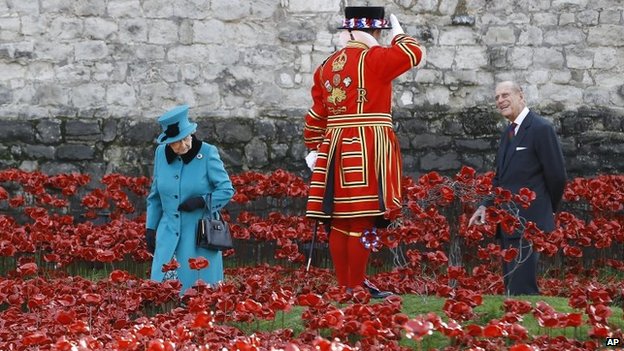 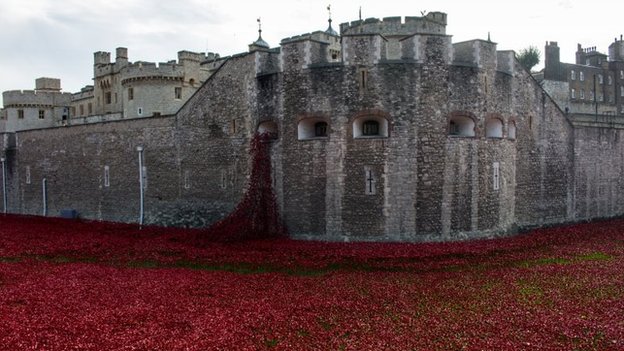 The ceramic poppies deliberately appear to be blood, spilling over from the Tower into the moat like a bloody waterfall

A team of 8,000 volunteers installed the sea of red flowers.

The Tower of London was where more than 1,600 personnel swore an oath to the Crown after enlisting for the War.

It was also used as a military depot, ceremonial setting-off point for regiments stationed there and the execution location for 11 German spies.

Artist Paul Cummins, who met the Queen and the Duke of Edinburgh during their visit, said he had been inspired after reading a soldier's will. 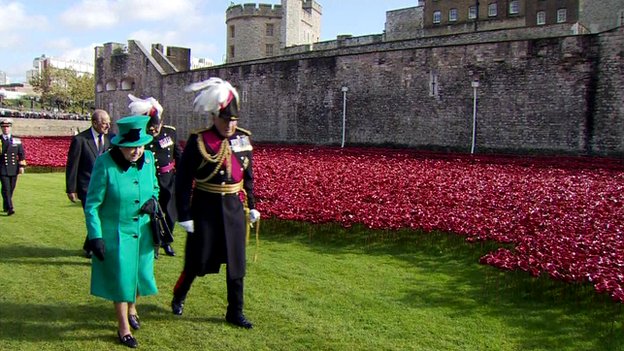 He said: "I approached the tower as the ideal setting as its strong military links seemed to resonate.

"The installation is transient, I found this poignant and reflective of human life, like those who lost their lives during the World War One.

"I wanted to find a fitting way to remember them."