Nigel Farage to share a platform with Donald Trump

Blackleaf
#1 Aug 24th, 2016
Nigel Farage will tonight tell Republicans how they can use the lessons from his successful campaign to take Britain out of the European Union to send Donald Trump to the White House.

The former leader of the UK Independence Party is due to address 15,000 Republican supporters at a rally for the Republican presidential nominee in Jacksonville, Mississippi tonight.

Just months from November's presidential election, the pair were expected to meet for dinner for the first time tonight. Mr Farage is in America accompanied by Ukip donor Arron Banks.

Nigel Farage to share a platform with Donald Trump Nigel Farage will tonight tell Republicans how they can use the lessons from his successful campaign to take Britain out of the European Union to send Donald Trump to the White House.

The former leader of the UK Independence Party is due to address 15,000 Republican supporters at a rally for the Republican presidential nominee in Jacksonville, Mississippi tonight.

Just months from November's presidential election, the pair were expected to meet for dinner for the first time tonight. Mr Farage is in America accompanied by Ukip donor Arron Banks. Mr Farage is thought to be the first British politician to address a Republican presidential election rally.

"I went to the [Republican party] convention in Cleveland and I just could not believe that ordinary people are talking to me about Brexit.

They see it as a victory of ordinary people against big business, big banks and big politics.

The Republican activists and managers here are keen to hear the Brexit story, hear how we managed to get 2.5million people who dont normally vote at all to go down to the polling station.

It was a victory for the little people  and if the Trump camp reaches out to those same people who have been disadvantaged by corporatism, under-cutting wages, a lot of strong similarities to the United Kingdom then it does not matter what the polls say, what the liberal media say  in the end elections are won by numbers. Mr Farage continued: There is a potential target out there that the Republican party needs to reach. We reached them in Brexit  if they do the same they can completely turn this election around.

Mr Farage said that he would not be endorsing Mr Trump at the rally because it was wrong for a foreign politician to intervene in a US election.

She added that "they don't know each other".


Nigel Farage to share a platform with Donald Trump

People in my street don't speak English: Farage says immigration was key to Brexit vote - and takes a swipe at Hilary During a wide-ranging interview Mr Farage was asked by Super Talk FM host JT how pivotal a role he felt immigration had played in the British peoples decision to leave the EU.

He replied: It was the absolute key. I dont think there was any one incident. I think this was a gradual thing that what people saw were unrecognisable, rapid changes in their community.

It was gradually people saw their way of life was changing, their quality of life was deteriorating, and they kept being told by their leaders oh dont worry about it because our GDP is going up so all immigration must be a good thing.

Where we struck the chord is yeah, our GDP may be going up through mass immigration but whos benefitting? Its the big businesses getting cheap labour who are benefitting.

He added that there are things in life that matter more than money saying people cared more about their communities, local services and whether your kids feel safe going out into the street to play.

The former UKIP leader has become a hero figure in the Republican movement following the Brexit vote, with US politicians recognising similar feelings of anger towards the political elite in Washington.

During the interview he aimed a series of barbs at Democratic nominee Hilary Clinton, describing her as an establishment stooge who was on the side of self-interested big business and not ordinary people.

And speaking about the vitriol Brexit voters had faced from UK politicians and media, he said: I see all the things being said about Trumps supporters  theyre stupid, theyre old, theyre backward, theyre racist and I just think the parallels are so enormously strong.

Ive been part of a political revolution in the UK. They all said it couldnt happen  the media, the politicians, the businesses.

That we were whistling in the wind, we were away with the fairies, we were going to lose, the EU was going to be here forever.

But with a well aimed stone like David we hit our Goliath, we knocked that over and the parallels here are uncanny.

If people want things to change theyve got to get out of their chairs and fight for it  it can happen. We proved it.

Aug 24th, 2016
That ole boy has a mouth as big as Steven Tylers. Hell he could swallow a melon

Aug 24th, 2016
Wait a minute. A post-Brexit UK will need all of the free-trade friends it can get, and Nigel Farage is now essentially endorsing Trump, possibly the most portectionist presidential candidate in US history.

With whom does Farage hope for the UK to trade?

And about that Nigel Farage poster: it's missing an indefinite article. Damn immigrant.

Aug 25th, 2016
Much better to have Trump in the White House than another Clinton.

As for trade, Britain already trades with America. Outgoing UKIP leader Nigel Farage has urged Republicans to "get your walking boots on" and drum up support for Republican presidential nominee Donald Trump.

He appeared before 15,000 activists in Jackson, Mississippi, being introduced by and sharing the stage with Mr Trump.

And he said the party could "beat the pollsters" in the presidential race.

Mr Trump, who is trailing his rival Hillary Clinton in the opinion polls, backed the UK's exit from the EU.

In a tweet last week, Mr Trump said: "They will soon be calling me Mr Brexit."

Mr Trump introduced Mr Farage as the man who "brilliantly" led the UK Independence Party's campaign to secure a vote on the future of the UK's 40-year membership of the European Union.

Mr Farage began his address by saying he had a "message of hope and optimism" for the Republican Party.

He drew on parallels between Mr Trump's bid for the White House and that of the Brexit campaign's "people's army of ordinary citizens", which he said engaged successfully with the public prior to the UK's referendum vote on whether to leave the EU.

"And remember, anything is possible if enough decent people are prepared to stand up against the establishment."

Mr Farage, who attended the Republican convention in Cleveland last month, had previously said he would not "fall into the trap" of personally endorsing Mr Trump in his quest to reach the White House.

However, during his rally appearance he said that if he were an American, he would not vote for Mrs Clinton "even if you paid me". 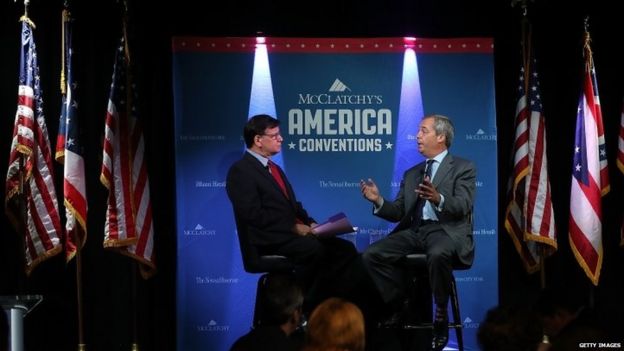 The UKIP leader earlier told local radio in the state that the similarities between Brexit and the US election were "uncanny".

Speaking on Super Talk Radio in the US state, Mr Farage said he had been part of a "political revolution" in the UK and there were the makings of a similar movement in the US.

He compared the federal government in Washington DC to the European Commission, saying many people felt it had become "its own country", and claimed the Democrat nominee, Hillary Clinton, epitomised the status quo.

"I'm going to say to people in this country that the circumstances, the similarities, the parallels, between the people that voted Brexit and the people that could beat Clinton in a few weeks' time here in America are uncanny."

He suggested it did not matter that the political establishment, including many top Republicans, were shunning Mr Trump's campaign.

By Gavin Hewitt, in Jackson, Mississippi

Donald Trump showered Nigel Farage with praise as the leader who had helped Britain regain control of its borders.

The two men shook hands and then Mr Farage spoke for 10 minutes. He was greeted with strong applause.

He said there were parallels between Brexit and what was happening in the US - little people let down by global corporations. "We made June 23 our Independence Day when we smashed the establishment", he told a crowd waving "make America great again" placards.

From the side of the stage Mr Trump smiled and clapped. Mr Farage spoke about when President Obama came to the UK and urged voters to remain in the EU. "He talked down to us," he said, "he treated us as nothing."

Mr Farage said "I can't possibly tell you how you should vote", but added he would not vote for Hillary Clinton "if you paid me".

It was not an endorsement but it came close.