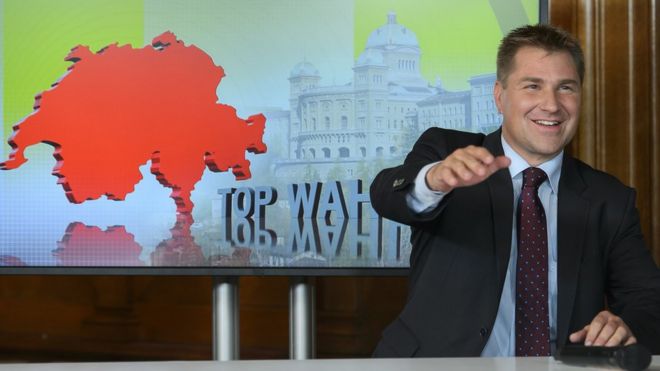 The right-wing, anti-immigration Swiss People's Party (SVP) has won Switzerland's parliamentary election with a record 29.4% of the vote.
Its victory translates into 11 extra seats, giving it 65 out of the total 200 in the lower house.

Swiss media are speaking of a "Rechtsrutsch" - a "slide to the right" - because the SVP, FDP and some small right-wing parties can now command a majority in the National Council (lower house).

No such slide has occurred yet in the 46-seat upper house (Council of States), as a second round of voting is required in many cantons.
The SVP won the 2011 vote with 26.6%, becoming the largest party, but now it has made further gains.

The SVP is sceptical about Switzerland's many bilateral agreements with the EU, telling voters that the country is better off remaining outside the 28-nation bloc.
In Sunday's election the leftist Social Democratic Party (SP) came second, winning 44 seats - two fewer than last time.

"The vote was clear. The people are worried about mass migration to Europe," said SVP leader Toni Brunner. 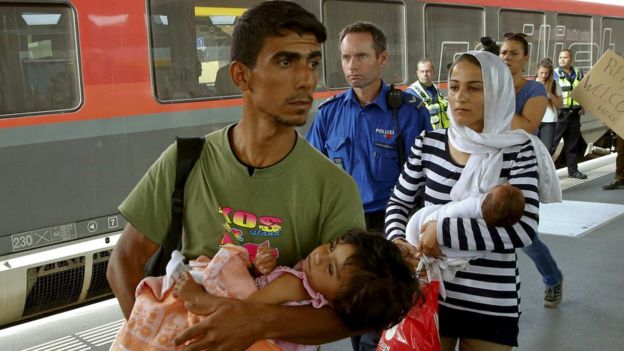 The SVP spearheaded the Swiss drive to impose immigration quotas, which got the green light in a February 2014 referendum. But it contradicts the EU's freedom of movement principle, which Switzerland had earlier agreed to respect.

The EU has until January 2017 to resolve the dispute with Switzerland - after that the Swiss government must make the quotas law.

Switzerland has pledged to participate in the EU's controversial scheme to relocate 120,000 refugees from Italy and Greece, but it is not yet clear how many the Swiss will accept.

The SVP is pushing for the three biggest parties to get two seats each in the seven-member government. Its composition will be decided by parliament in December. Currently the SVP has one seat in the governing council.

The newly-elected SVP politicians include Magdalena Martullo-Blocher, daughter of the SVP's controversial vice-president Christoph Blocher, who served in government from 2004-2007.

Mr Blocher, a billionaire businessman, made the SVP the best-funded Swiss party and played a key role in the Swiss rejection of the European Economic Area. EEA membership would have been a stepping-stone to Swiss EU membership.

Roger Koeppel, a leading Swiss political pundit and chief editor of the magazine Die Weltwoche, was elected as an SVP candidate in Zurich.

Europe is closing it's doors Canada will be opening ours wider

Europe is closing it's doors Canada will be opening ours wider

When are you leaving?