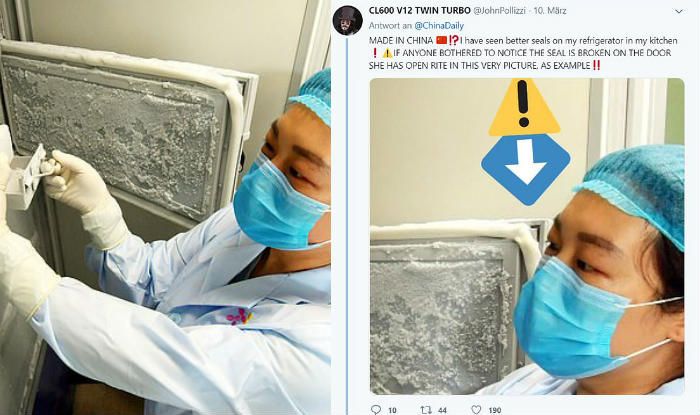 Well the so-called experts say it's more contagious than flu.

However, it's LESS contagious than measles. So why aren't we in a measles lockdown?


Cuz we have a measles vaccine, Einstein?

U-Tube is not necessarily science/ fact based.

The science is more than in place. Watch it.

You said it earlier, "you have to be skeptical of everything".

Last I checked Science is still part of everything.

We in CDA could have been firmer in regulations from the onset....but no one really knew what we all were dealing wit.
dealing with an unknown entity ........is a challenge for anyone........even the experts.

So the question NEEDS to be asked: Why is the government putting us into lockdown over coronavirus but not the flu, which is ten times deadlier?


there are vaccines for the flu, Einstein!

Cuz we have a measles vaccine, Einstein?

So are you saying the UK was subjected to regular measles lockdowns before the vaccine was introduced in 1968?

The science is more than in place. Watch it.

You said it earlier, "you have to be skeptical of everything".

Last I checked Science is still part of everything.

I AM skeptical of everything

11 hours ago
Then you need both sides dont you? Watch the video that follows the Science.


waiting for 0 new cases for at least five consecutive days.

Idiot...
I WILL play the blame game.
The Chinese flu, as it is accurately called, started in China. China unleashed this virus onto the world and then lied and denied they had anything to do with it.
China lied and people died.
China lied and our economies lie in tatters, which is going to cause more deaths than the Chinese flu.
So don't tell me not to play the game game. China needs to pay for what it has done.

You aren't planning on committing any hate crimes, are you?

You aren't planning on committing any hate crimes, are you?

that was not the question....

So are you saying the UK was subjected to regular measles lockdowns before the vaccine was introduced in 1968?


Where did I make that statement, Moron?

6 hours ago
Just saw on the news tonight Boris Johnson is "dropping the hammer" in England! A lot of gumption that boy, hopefully in time to prevent total annihilation over there. They are presently approaching 10,000 new cases daily.
What's our boy in Ottawa doing about it?

He has to check with Xi first.

Experts today poured scorn over questionable claims the UK's Covid-19 outbreak is doubling in size every seven days, after the nation's two top experts warned Britain is on course to follow the trajectories of France and Spain and may face 50,000 new cases of the disease every day by mid-October, unless it is brought under control.

Critics accused Number 10 of trying to 'scare' people, after Sir Patrick Vallance and Professor Chris Whitty were wheeled out today to 'roll the pitch' ahead of Boris Johnson's grand unveiling of tougher Covid-controlling policies tomorrow.

Sir Patrick and Professor Whitty claimed new cases could rise exponentially to 50,000 per day within a month if nothing is done, that infections are surging across the country and that resurgences in France and Spain could be what is in store for the UK.


But scientists today pointed out that the claim of 50,000 cases a day by October 13 is based on the assumption of cases doubling every seven days. Neither Spain, France or the UK itself has witnessed such a worrying trend, with one of the government's own advisors admitting it is an 'implausible scenario'.

Data shows Spain is recording an average of just 14,740 new infections daily, up from 13,470 last week. Its rate has doubled in the past five weeks, from 5,690 on August 14. France's rolling average of daily cases has doubled in the space of three weeks, rising from 5,167 at the end of August to 10,381 yesterday.

And Department of Health data shows 3,929 new infections are being recorded each day in Britain, on average  up from 2,998 last Monday and 2,032 the week before that. It means the government's own data shows confirmed cases are doubling every fortnight, suggesting Britain is not hurtling towards 50,000 by mid-October.

Separate figures from the Office for National Statistics (ONS), which tracks the size of the outbreak in England by carrying out thousands of swab tests, last Friday revealed cases almost doubled between September 3 and 10 from 3,200 a day to 6,000. But that rate of growth may have slowed since the introduction of the Rule of Six on September 14.

Disaster scenario of 50,000 cases per day by mid-October is 'very unlikely'

The boldest claim of this morning's briefing was that Britain could be facing 50,000 new cases of coronavirus per day by mid-October if no action is taken.

Sir Patrick made the warning based on the current epidemic doubling time of eight days, as revealed in Imperial College London's official REACT study this month, which looked at mass testing results up to September 7.

And the Office for National Statistics (ONS), which tracks the spread of the disease through random swab tests, says the number of cases almost doubled in England between September 3 and 10, jumping from 3,200 new infections a day to 6,000.

However, official numbers of cases found in positive tests have taken two weeks to double  from a daily average of 1,812 on Sunday, September 6, to 3,679 yesterday, September 20.

Sir Patrick said: 'If that continues unabated and this grows, doubling every seven days, then what you see, of course, let's say there were 5,000 today, it would be 10,000 next week, 20,000 the week after, 40,000 the week after, and you can see that by mid-October, if that continued, you would end up with something like 50,000 cases in the middle of October, per day.'

He said the 50,000 cases per day could be expected to lead a month later  the middle of November  to 200 or more deaths per day.

However, 50,000 cases per day, which Sir Patrick framed as a possibility and not a prediction, would still likely be fewer than half as many infections as Britain saw in March and April.

Scientists predict that more than 100,000 people were getting newly infected each day during the peak of the crisis, but not enough testing was done to prove this.

'It seems unlikely to me we will have 50,000 infections by mid-October. The other possibility is there will be only 5,000 cases a day. Do we really need a two week lockdown to prevent that? I dont think we do.

'If we continue exactly as we are, I think we are doing better than France. I think well get out of this without a huge number of people being ill. France are already coming out the peak and they are two to three weeks ahead of us...

'Its important we take things seriously, but what worries me is they will rush into a two-week lockdown, mainly because it does not move us forward.'

Professor David Paton, an industrial economist at the University of Nottingham, also hit out at the 50,000 per day prediction.

He pointed out on Twitter that France and Spain, to which the UK was compared, are seeing cases double every three weeks, not every one, which he said would put Britain at more like 7,000 to 8,000 per day by mid-October.

He said the 50,000 per day would be a rate at least three times higher than currently being seen in Spain or France.

Professor Paton told MailOnline: 'It seems a very strange scenario to present, its not, as far as I can tell, based on any particular modelling.

'If you look at the past few days, cases have been going down rather than going up, doesnt seem to be any basis to select this doubling 'every seven days'.

'It [also] seems odd, to me, to choose to compare against France and Spain. There are other countries they could have looked at, where cases have been doubling every three weeks. Nobody knows what will happen to cases in the UK.

'Do they really think well have five to six times more cases than France?'

Dr Michael Head, from the University of Southampton, added: 'It is important to note the Chief Medical Officer did say the potential for 50,000 cases a day is a "worst case scenario".

'Modelling has to calculate best, worst, and likely scenarios to allow different plans to be put in place.

'We are very unlikely to see cases at that level because interventions will be rolled out that restrict the spread of the virus, such as regional lockdowns. However, it is a timely reminder that the pandemic is accelerating both globally and also here in the UK.'

And Professor Mark Woolhouse, an infectious disease expert at the University of Edinburgh who sits on a group that feeds into SAGE, said: 'Only three countries in the world  India, US and Brazil  have ever reported more than 50,000 new cases per day (though in the early stages of the pandemic there will have been substantial under-reporting)...

'Many observers may consider this an implausible scenario. Presumably the UK government intends it to illustrate the consequences of sustained exponential growth.'

There are also concerns that the rise in cases is not a second wave heading in the same direction as the first, but simply a rise because lockdown has been lifted. Experts fear the Government could over-react.

Professor Robert Dingwall, from Nottingham Trent University, said: 'I think there is a great deal of uncertainty about whether what we are seeing at the moment is a genuine pick up, or the sort of thing we saw after an earlier round of easing restrictions where they pick up a bit and then settle down on a plateau.

'I dont think many would be surprised, as people went back to work and children to schools, and there is much more social interaction. Maybe the cases are just going up and finding a new level.'

What is our boy in Ottawa doing about the pandemic in the UK??

Seems he has his hands full here in CDA.

So who will police Covid? Everyone has denied Boris’s final claim...

Lockdown Started 6 Months Ago Today - A Pitiful Year In Review

Can you believe weve been in this mess for 6 months today! Half way there guys....only 6 months left! It's time to contact our MPs to tell them we do not support lockdown.

16 minutes ago
Funny part is I remember when Blackshirt was on his knees begging BoreJo to piss on his face.