Tired of being played yet?? 😲 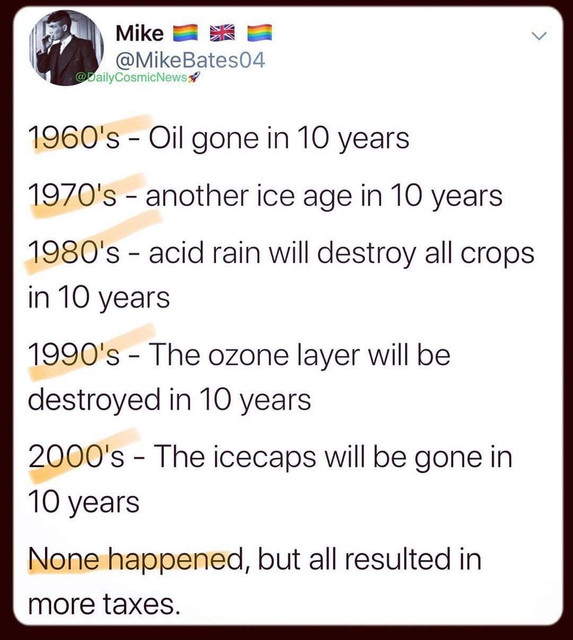 All of it prog shit.

All of it prog shit.


In support of our Cdn culture, I provide here some definitions and interpretations of unique Cdn words and phrases:

Dictator: In conventional history, a dictator is a person who seizes power at gun point and holds power by terror and the threat of violence. In our LIE-beral dominated Canada, a dictator is a person-such as former prime minister Stephen Harper who is currently deemed a dictator in spite of being elected several times by popular vote. Harper slipped into civil service Hog defined dictator mode while trying to rein in public sector wage and pension demands that were crippling our economy and ruining ordinary tax payers. It may sound like a contradiction to refer to a popularly elected leader as a dictator but in Canada anybody who attempts-as Harper did- to interfere with the flow of rich gravy to civil service Hogs is automatically deemed a dictator by Hogs and LIE-beral loving news media.

De-escalate: A term much loved by LIE-berals who have decided that cops are being racist and violent when they shoot people doing criminal acts. An example of a situation in need of de-escalation occurred in Durham Region a year back- in which a deranged man carrying a table leg attempted to crush the skulls of various passersby- naturally the intended victims all fled at high speed and the deranged person went in search of new victims. Such behaviour disturbs the public and frightened neighbours called the cops.

When officers arrived- the deranged person decide they would make suitable victims and tried to crush cop skulls. It is at this point that LIE-berals INSIST that cops should de-escalate the situation- but LIE-berals REFUSE to tell cops HOW this can be done!

The deranged person who began attacking cops was suffering from Schizophrenia and may have been in the midst of a Grande Mal Epileptic seizure as well according to family members so it is quite hypocritical of LIE-berals to treat cops as if they were simply too lazy to de-escalate a situation where the voices in the deranged persons head are much more real and important than the distant voices of frightened cops who do not want to be beaten to death with a table leg by a crazy person that LIE-berals refuse to medically treat because it would interfere with their flow of gravy!

Systemic Racism: A term much used by radical members of our society- meaning persons who hate white society and its values- and who use systemic racism as an excuse for and justification of criminal behaviour in the black community. A cop who attempts to arrest a member of a Cdn ethnic minority will often prompt accusations of systemic racism -as if arresting criminals was somehow unfair.

Innocent victim: A citizen who does something incredibly foolish during a confrontation with cops and gets shot for it. Most innocent victims are either untreated mentally ill persons who LIE-berals are ignoring and refusing to treat or they are ethnic minorities who have major issues with authority figures and who believe that efforts by cops to shut down their `business`- such as pimping, whoring, drug dealing, fencing stolen property, murdering rival gang members- is all part of a systemic racist plot to keep down black people.

Rate of inflation: a financial term used as an excuse by LIE-berals to justify any greedy whim or gross indulgence- all paid for by hard pressed tax payers and demanded by LIE-berals or by their civil service Hog allies for their own greedy pleasures! LIE-berals consider inflation- either too little or too much to be harmful to our economy. LIE-beraqls are very much afraid of deflation in which the value of things we own drops drastically. One example would be cottages and recreational properties that may slump badly in value as the younger generation is focused on paying massive student loans and rent for costly slums. The value of stocks held by civil service Hogs are also vulnerable to deflation as the up-coming generation has all its money tied up in the previously mentioned student loans and assorted bills payable to Hogs! Deflation is also a real fear for LIE-berals as it would make it much harder to service our already crippling national debts! Of course a too rapid increase in inflation would also be damaging as there are so very many people in Canada living on fixed incomes who would be crippled by high inflation! High inflation is also a lever pushing up interest rates and this rate increase would cripple cash strapped and over indebted govt.

Balanced budget: In conventional history a balanced budget was defined as one where all bills are paid and there is a little money left over. In LIE-beral terms, a balanced budget is one where much debt and future cost is poorly hidden behind a badly woven fabric of fake news. The classic example is the current Ontari-owe LIE-beral budget of 2017 that relies on a series of fudged numbers, distortions of truth and one time raids on various emergency funds that are now empty.

The current `balanced budget` fudges numbers by accounting methods NOT taught at any legitimate school of business. The current `balanced budget` is NOT counting massive promises of new pension gravy being offered to civil service Hogs in exchange for votes to LIE-berals at election time- it is a gross conflict of interest that would be illegal in a more honestly regulated electoral system.

The budget of 2017 got `balanced` as LIE-berals call it- in large part by the expedient of SELLING off our Hydro electric system-a one time sale that cannot be repeated- meaning there is a major fiscal hole-about 5 billion dollars worth- already in the 2018 budget. The Hydro sale also means govt will be getting less revenue in future- although the LIE-beral friends who bought the Hydro stock will do nicely out of it. The budget hole expands further when it is realized that the new private sector owners of our Hydro system will be demanding major profits from their new investment and this WILL drive up already crippling electrical costs even further-meaning tax payers will be forced to cut back on spending in other areas- with resulting reductions in tax revenue for LIE-berals- but that is their way- in one pocket and out the other!

LIE-berals are under HUGE pressure to grant carbon exemptions to Ontari-owe companies in order to save jobs though why LIE-berals did not see this problem coming is a mystery- perhaps they were blinded by the thought of all that new gravy? LIE-berals have also failed to recognize the conflict set up between ordinary Cdn workers whose wages will be frozen due to companies paying out so much extra revenue to carbon crap credits- with NO money left for raises to workers, while the cost of EVERYTHING SOARS due to the Carbon crap plan and with further pressure on govt service costs due to increased demands for more |Hog gravy! Sadly, the Carbon crap and trade plan ONLY cleans wallets and leaves the air dirty!

The latest wage numbers from StatsCan indicate that our standard of living is dropping again even as LIE-berals trumpet their defense of the `middle class`- by which they mean civil service hogs who are critical to LIE-beral election victory!)

The stated aim of Carbon crap and trade is to save the environment but the reality is otherwise! For one thing, ALL Carbon crap and trade cash will be handed out to civil service Hogs as pension and salary increases so they will have the means to continue spewing massive quantities of carbon while jetting around the world on airplanes-the dirtiest of all modes of transport; and Hogs will continue spewing carbon from a vast array of expensive gas guzzling toys lined up at their country homes on scenic lakes. It is ordinary people who will be expected to shrink their already small carbon output even further so that Hogs will have clean air to breath and no need to feel guilty when firing up all those gas guzzling toys!

Global warming: a process by which the planetary climate is harmed by the burning of vast quantities of fossil fuel. LIE-berals recognize that some burning of fossil fuel is necessary- hence there is no need to restrict Hog production of carbon by placing heavy eco fees on any of the following: Hog owned sea-doos, snow mobiles, filthy two stroke weed whackers, riding lawn mowers that spew as much carbon in 5 minutes of operation as a modern car on the highway for 30 minutes, large SUV`s, airplane flights, electrically powered `bubble systems` that are placed around valuable Muskoka boat docks and left running all winter to create an artificial micro climate around the dock so the lake will not freeze and thus damage the dock and inconvenience the Hog who owns it.

Social justice: A measurement of fairness applied to our society in which people who have committed crimes are judged to be victims of white society. Native Cdns living on reserves are often victims of `white society`. Persons of colour from third world nations are also often deemed as victims of white society. LIE-beral Cdns see endemic corruption and routine squandering of Cdn tax money by native band councils as being somehow the fault of white people.

For instance, natives on reserves quite often live in deplorable housing in spite of govt pouring millions of dollars into improving living conditions. In the case of the Atiwapiskat band- population 1500- they were given 150 million dollars by govt and every penny was supposed to be spent on housing- yet not a single new residence was built; nor are there any receipts to show were that flood of cash went- it is just GONE! And LIE-berals consider that we are being socially UN-JUST if we ask where that money went.

Unemployment in native reserves is another social justice issue that is believed by LIE-berals and their supporters to be the fault of white people. Our Cdn society requires post secondary education for over 75 percent of all jobs currently available- and of the other 25 percent- a high school certificate is usually required- yet only 25 percent of natives ever finish high school- yet LIE-berals and natives consider it to be prime example of social injustice that so many natives are un-employed- due to lack of educational qualifications.