RUGBY LEAGUE - Australia Kangaroos lose at home against the British Lions for the first time since 1992.

This is in the Tri-Nations Series which also involves New Zealand.

Great Britain coach Brian Noble hailed a battling performance by the Lions as they beat Australia 23-12 in their Tri-Nations clash in Sydney.

A jubilant Noble told Sky Sports: "I knew we could shake this competition up and we have done.

"I'm proud of the boys. We showed we could defend our line and I'm really pleased for every one of them.

"We did not take a step back. We stood our ground which is what I expected us to do - it was important we did that.

"I think we have a good rugby team. We talked about building pressure and we got our just rewards. They might start taking us seriously now.''

Leon Pryce put the win in perspective, insisting this was only the start following last week's defeat by New Zealand.

"There is a long way to go but a GB team going to Australia and winning is unusual. It's a great feeling.

"Our forwards were awesome tonight. Sean Long led from the front with a brilliant half-back's performance.

"A lot of things had been said in the press. It was a little bit tough, but it was all in good fun and luckily we got a good win and can enjoy the night.''

The Lions recovered from 6-0 down in the first half to take a massive step towards the Final with a 23-12 triumph.

Long was the hero, shrugging off an early assault from Willie Mason to set up two of Britain's four tries. 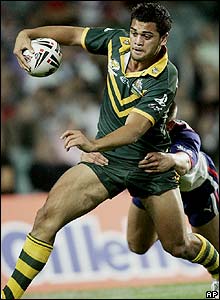 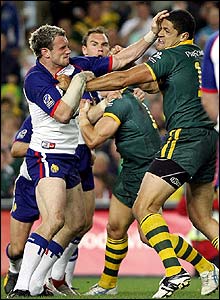 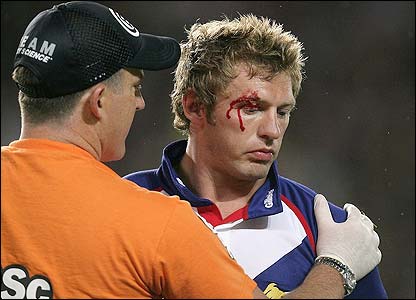 After flooring Stuart Fielden in just the fourth minute, Mason's late tackle leaves Sean Long with a nasty cut above the eye
---------- 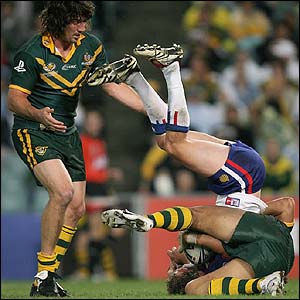 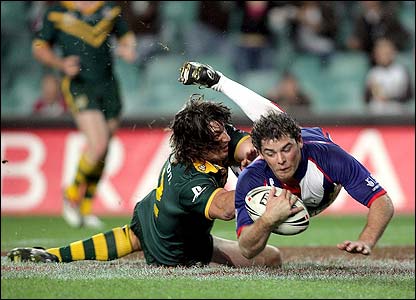 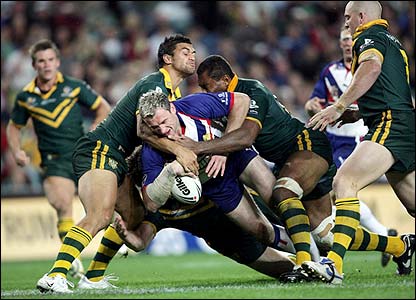 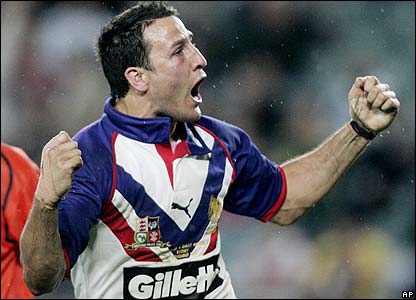 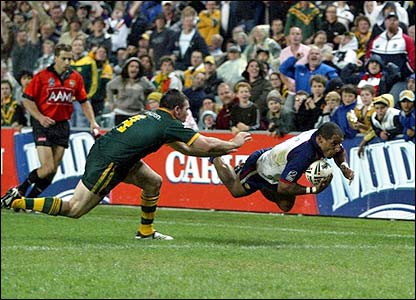 Great Britain resist late Australian pressure and break away to release Gareth Raynor, who scores in the corner
---------- 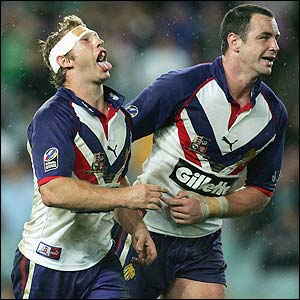 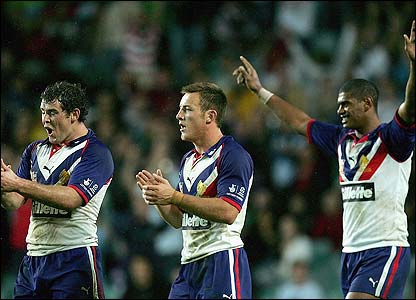 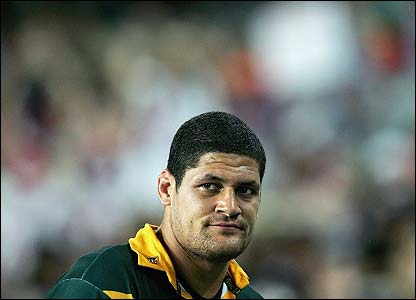 Mason's face says it all as the Kangaroos slide to defeat to Great Britain for the first time at home since 1992 (Ha ha ha ha!)

Nov 7th, 2006
Mate you've got it all wrong! The British and Irish Lions play are a combined Rugby Union team from the twin Kingdoms, Wales and the two Irelands. They only tour every four years and rotate tour destinations of New Zealand, South Africa and Australia. Last year they came here and got their arses handed to them.

The game you're referring to was a Rugby League test as part of an annual tri-series between Australia, Great Britain and New Zealand. This Great Britain team is really only an England team with the odd token Welshman. They aren't known as the Lions and there are no Scots or Irish players. In the UK Rugby League is only played in Lancashire, Yorkshires west riding and a few isolated urban pockets.

In fact Rugby League is only really a major Sport In New South Wales and Brisbane, QL.

Although it was a great game with a funny result.