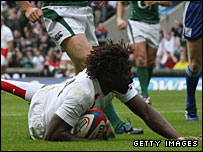 England relieved the pressure on coach Brian Ashton with an impressive Six Nations win over Ireland at Twickenham.

Despite going 10-0 behind courtesy of a Rob Kearney try and two successful kicks from Ronan O'Gara, the home side hit back for an important victory.

The win ensured England ended on a high - but the future does not look so good for Ireland coach Eddie O'Sullivan.

His position has come under increasing threat following his side's early exit from the World Cup last year and will not have been improved by a third defeat of a disappointing campaign.

Scrum-half Eoin Reddan took a quick tap on England's 22, feeding the ball quickly out to the left.

O'Gara landed the conversion and made it 10-0 just three minutes later with an easy penalty.

Ireland lost flanker Denis Leamy to injury on 12 minutes - and as he walked off the pitch Cipriani slotted his first points for England with a penalty of his own. 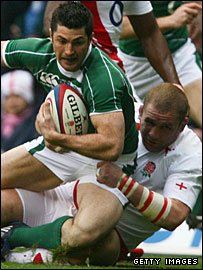 
The home side then drew level with 20 minutes gone.

Some intense pressure and incisive passing ended with Sackey going over on the right, Cipriani adding the extras.

Noon almost added a second try on 24 minutes after England opened up the Ireland midfield beautifully.

But the Newcastle centre, who had taken Cipriani's offload at pace, was held up just short.

England went into the lead for the first time on 30 minutes when Cipriani, looking increasingly assured, slotted a straightforward penalty after Ireland had infringed at a ruck.

Murphy hobbled off soon after with a leg injury, but there were no further scores before the interval.

It did not take long for the scoreboard to start ticking over again after the break.

Cipriani stepped up to make it four out of four successful kicks at goal with his third penalty of the afternoon on 45 minutes.

But it was O'Gara who had the chance to level the scores on 50 minutes after the England forwards had infringed at a ruck. 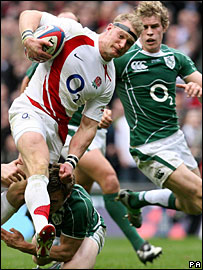 
Unfortunately for the Irish, he was off target with his kick.

England were forced into a change of their own on 52 minutes, when Toby Flood, who had impressed at inside centre, limped off to be replaced by Jonny Wilkinson.

Having been singled out for criticism in the wake of the Scotland defeat, Wilkinson had been dropped to the bench to make way for Cipriani.

But the record-breaking points scorer ran on to the Twickenham pitch to a chorus of cheers, suggesting he was still a favourite among the England fans.

It was another substitute who extended England's lead on 58 minutes.

Tait, on as a blood replacement for Sackey, scorched his way over in the right corner following another sweet passing move.

But no sooner had he scored than Tait was off again, able to watch from the bench as Cipriani landed the conversion to make the score 23-10 in England's favour.

Ireland worked hard to get back into the match, but it was England who looked the more dangerous.

Noon showed great skill in chipping the ball over the onrushing Irish defence as he made inroads down the right touchline while Tait, back on for Sackey, was also a thorn.

The impressive Noon wrapped up victory for England with 11 minutes remaining, shrugging off two tacklers to force his way over in the left corner.

Cipriani duly added the extras, converting from the touchline to keep his unblemished record intact.

The Wasps youngster added another penalty six minutes from time as England ran out convincing winners, clinching their first victory over Ireland in five attempts in the process.

More importantly, it gave Ashton a morale-boosting lift at the end of a week when he has come under fire for England's lack-lustre performances and the treatment of Wilkinson, who many felt was made the scapegoat for the loss to Scotland. 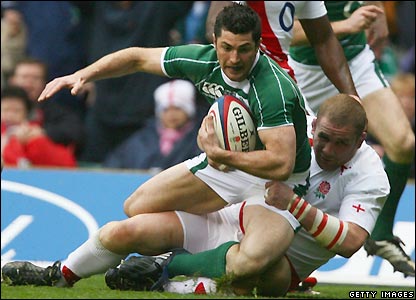 England 33-10 Ireland: The hosts' poor form looks set to continue when they allow Rob Kearney to score an early try 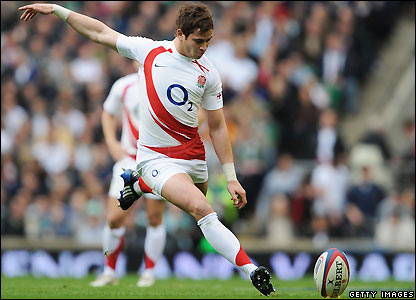 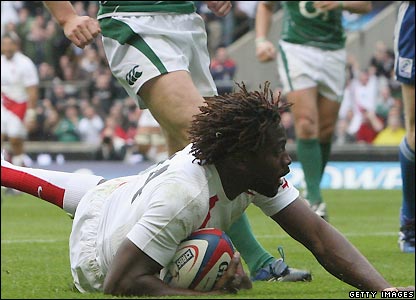 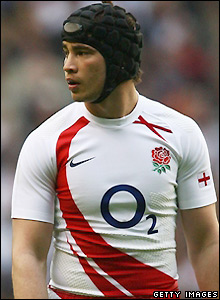 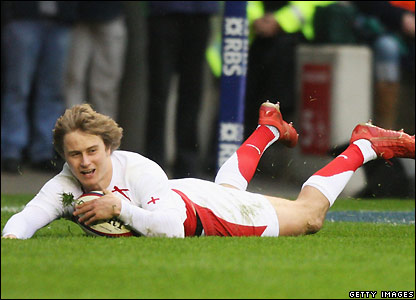 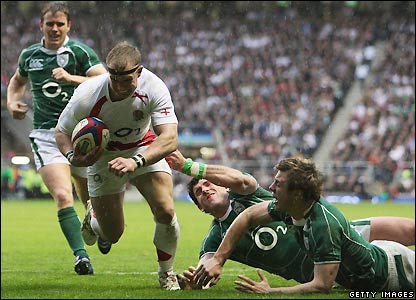 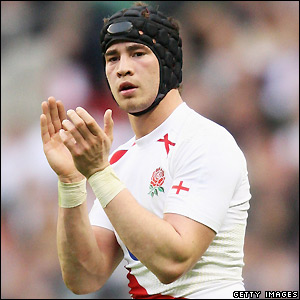