Blackleaf
#1 Aug 4th, 2007
World Champions England crushed their Celtic neighbours Wales by 57 points in a friendly in London. Wales haven't beaten England at Twickenham since 1990, but this was a record victory for England against the Welsh. The game was a warm up for the Rugby World Cup which starts next month.... 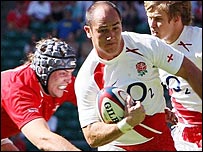 
England's experimental team ran up a record score against Wales as they put the Celts to the sword at Twickenham on Saturday.

The world champions ran in tries through Nick Easter (2) and Steve Borthwick to lead 22-0 at half-time.

They extended their lead through Easter and Shaun Perry before Wales finally registered through Dafydd James.

Fly-half Jonny Wilkinson, who looked sharp throughout, kicked 18 points as a dominant display by England's massive pack gave him an armchair ride in temperatures of 30C in London.

With just three games remaining until the World Cup gets under way on 7 September both England boss Brian Ashton and Wales coach Gareth Jenkins used the game to examine their squads, but there was a big difference in their mindsets.

Ashton, who only took charge in December and is still trying to rebuild the struggling world champions, put out a team fielding a number of untried combinations, but ones which may be England's first choices come the World Cup.

Jenkins used the match to look at a number of players who will definitely not be first choices in France, and Wales paid the price as they were steamrollered.

England, who lost full-back Mark Cueto to a groin injury in the warm-up, missed the chance to take an eighth-minute lead when Wilkinson pushed a comparatively simple penalty wide.

But they opened their account just before the 15-minute mark when scrum-half Perry sniped down the blind-side.

The former welder, a stone lighter after some intensive fitness work, dummied through the first line of defence and although he was pulled down just short Easter burrowed over with the help of his mates in the pack.

Wilkinson missed the conversion but he made no mistake in the 21st minute following another break by Bristol number nine Perry deep into Welsh territory.

Wales infringed in desperation and England kicked the penalty into the corner before a machine-tooled catch and drive from the line-out saw Easter - like Perry looking much fitter - power over once again.

This time Wilkinson converted and with Wales looking under increasing pressure up front a big score was already on the cards.


The hosts collected a third try before half-time when the England pack once again put the Welsh on the back foot and a hot-stepping Wilkinson set up a beach head from which Borthwick plunged over.

Wilkinson picked himself up to add the extras and he kicked a penalty to make it 22-0 at the break after Aled Brew was yellow carded for a shoulder charge on Dan Hipkiss as the Leicester centre scythed through the Welsh midfield.

England lost captain Phil Vickery to injury at half-time but with their forwards obliterating their opposite numbers Easter and Perry added further short-range tries in the first 10 minutes after the break.

In the process Easter became the first number eight to score a hat-trick for England, albeit from a combined total of three metres.

Wilkinson, who looked sharp throughout, added both conversions to make it 36-0 with half an hour to go.

Harlequins number eight Easter trotted off after 50 minutes to be replaced by Lawrence Dallaglio, who received a rapturous reception.

He could do little as Wales immediately scored when sharp passing sent James over in the corner for an unconverted try.

But within seven minutes the 34-year-old had blasted over from the base of a scrum to show he intends to be in the mix in France.

Wilkinson's conversion extended the lead to 43-5 and he added the extras when a fine pass by Dallaglio handed Perry his second try of the match.

Wilkinson could not convert when Robinson scooted over in the corner but he made no mistake when Tait dotted down under the posts as England showed signs they may not be pushovers once their World Cup defence gets under way. 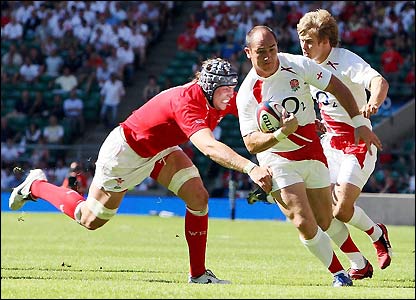 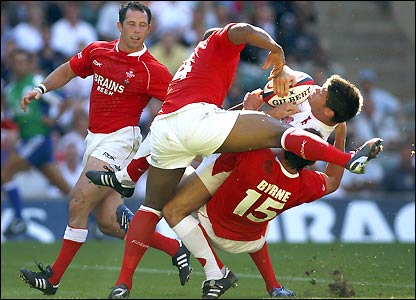 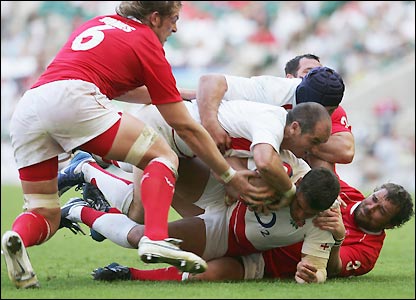