Blackleaf
#1 Apr 28th, 2019
Oscar-winning actor Rami Malek is to play a villain in the 25th official James Bond film - but the movie still does not have a title.

The cast and creative team have been unveiled at a launch event in Jamaica, with Fleabag creator Phoebe Waller-Bridge confirmed as one of the writers.

The unnamed film, which will be released next April, will be Daniel Craig's fifth and final outing as 007. Oscar-winning actor Rami Malek is to play a villain in the 25th official James Bond film - but the movie still does not have a title.

The cast and creative team have been unveiled at a launch event in Jamaica, with Fleabag creator Phoebe Waller-Bridge confirmed as one of the writers.

The unnamed film, which will be released next April, will be Daniel Craig's fifth and final outing as 007. 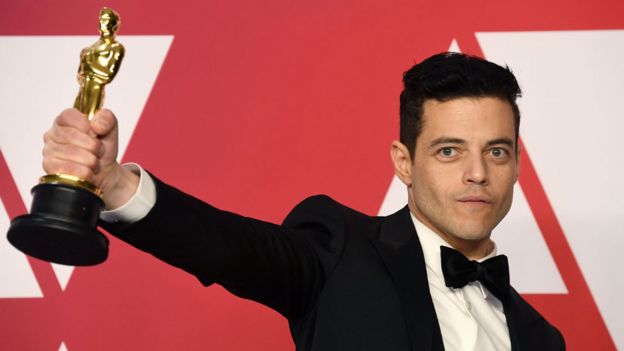 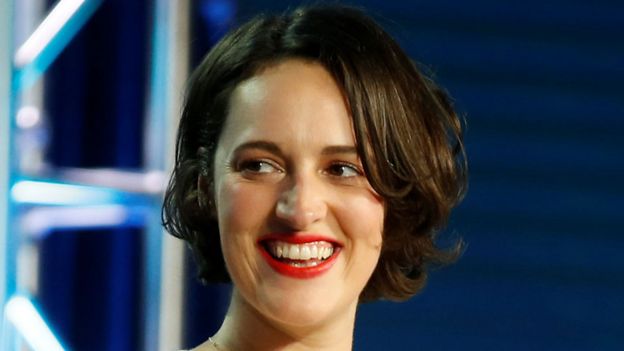 What role will Malek play?

Details of Malek's character haven't been revealed and he wasn't at the official launch on Thursday, but he sent a video message confirming he will play a villain.

"I'm stuck here in New York in production but I'm very much looking forward to joining the whole cast and crew," said the Egyptian-American actor, who is currently filming TV show Mr Robot.

"I will be making sure Mr Bond does not have an easy ride in this, his 25th outing. See you all soon."

After watching that, Craig joked that he was "scared" about what lay in store for Ian Fleming's suave secret agent.

What do we know about the plot? 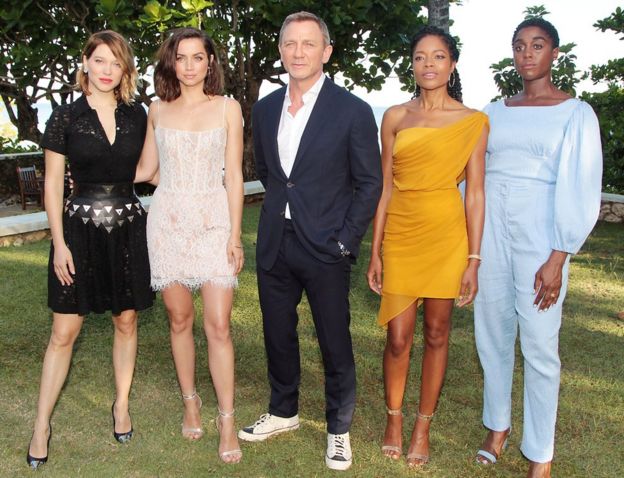 Bond will again be called upon to save the world from a shadowy adversary - all in a day's work for 007.

The official plot summary reads: "Bond has left active service and is enjoying a tranquil life in Jamaica. His peace is short-lived when his old friend Felix Leiter from the CIA turns up asking for help.

"The mission to rescue a kidnapped scientist turns out to be far more treacherous than expected, leading Bond onto the trail of a mysterious villain armed with dangerous new technology."

At the launch, producer Barbara Broccoli said Bond's attitudes to women would move with the times. "The Me Too movement has had a huge impact - rightfully, thankfully - on society, and these films should reflect that, as everything we do should," she said.

Craig told BBC News: "Bond has always adapted for the times. But you're dealing with a character who is flawed, who has issues, and I think that's something that's worth still exploring and grappling with.

"Of course, we wouldn't be movie-makers or creative people if we didn't have an eye on what was going on in the outside world."

Who else is in the cast? 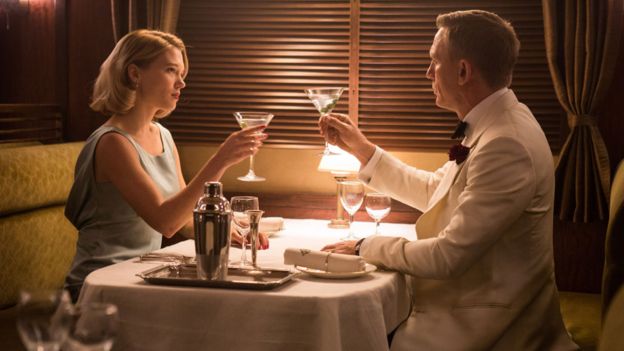 It was also confirmed that Ralph Fiennes and Ben Whishaw will return as M and Q respectively, with Naomie Harris coming back as Moneypenny and Rory Kinnear again playing MI6 chief of staff Bill Tanner. 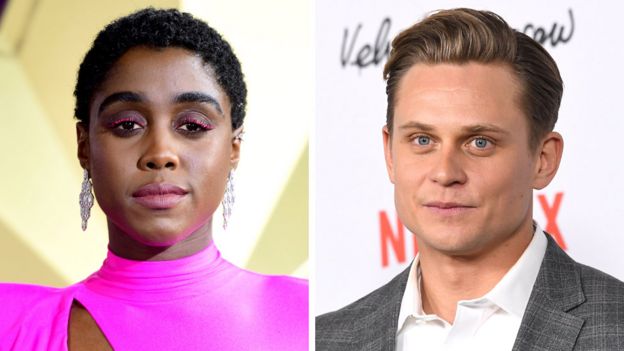 Lashana Lynch and Billy Magnussen are new additions to the cast

As well as Malek, new cast members include:

Cuban rising star Ana de Armas was Joi in Blade Runner 2049 and will be seen opposite Daniel Craig in another film, Knives Out, in November.

This is the first major film for French newcomer Dali Benssalah, who studied economics and trained as a Thai boxer before turning to acting.

Swedish-Danish actor David Dencik is best known for roles in Tinker, Tailor, Soldier, Spy and Top of the Lake: China Girl.Who is making the film?

Writer and actress Waller-Bridge, who was also behind the first series of Killing Eve, is just the second female writer in Bond history - after Johanna Harwood, who worked on Dr No and From Russia With Love.

Barbara Broccoli said: "Daniel [Craig] suggested Phoebe, who we all love, so we leapt at the opportunity and she's been amazing, doing great work."

The other co-writers on Bond 25 are seasoned Bond scribes Neal Purvis and Robert Wade along with Scott Z Burns, whose credits include 2007's The Bourne Ultimatum.

The film is being directed by Cary Joji Fukunaga, whose credits include the first series of HBO's True Detective and Netflix's Maniac.

Fukunaga said: "Daniel is my favourite Bond and I want to make sure this run of films, which have been fantastic, have a really great next chapter and keep upping the ante so whoever is next has a harder job."

Fukunaga came on board last year after Danny Boyle left the project over unspecified "creative differences".

There are also changes elsewhere behind the camera. Cinematographer Linus Sandgren, who won an Oscar for Hollywood musical La La Land, comes in as director of photography, while editor Tom Cross won an Oscar for Whiplash.

Apr 28th, 2019
Gays and black people. You must be beside yourself

Apr 28th, 2019
Twenty five Bond movies, when will they get it right^ question mark. Bond must be in his eighties now. These films certainly don,t reflect that. Preposterous nonscence commit to film. .oo7. I.m assuming Bond wins again and there will be a #26. 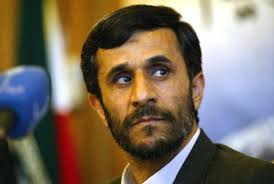 Meanwhile back at the ranch the real one gets away, . . . again.

Weren't the Mullahs criticizing Ahmadinejad for hugging Chavez' mother at his funeral?

I mean what kind of pervert hugs a woman at her son's funeral?

Apr 30th, 2019
Americans and anybody else associated with NATO would be the short answer since they killed her son. I would have included our FM after seeing her give M. Albright a hug and a smile. You should not do that with the 'wicked witch of the West'.

Jun 22nd, 2019
Danny Boyle: 'Robert Pattinson should be next James Bond'
WENN - World Entertainment News Network
Published:
June 21, 2019
Updated:
June 21, 2019 11:34 AM EDT
Danny Boyle backs Robert Pattinson to play...
featured by
Danny Boyle has weighed in on the debate over who should be the next actor to play James Bond by tipping Robert Pattinson for the role.
Early last year, it was announced the filmmaker had been tapped to direct the upcoming 25th movie in the spy thriller franchise  which is thought to be leading man Daniel Craigs last. Although Danny was replaced by Cary Joji Fukunaga shortly afterward due to creative differences, he has pitched Robert as his suggestion for who should take over the iconic role.
The Trainspotting filmmaker told The Guardian that after watching the 33-year-olds science-fiction horror film High Life, he knew the star was the perfect fit for 007.
It was so bizarre because I was sitting there thinking, Oh my God, they should get him to be the next Bond, he quipped.
Director Danny Boyle attends the UK premiere of Yesterday in London, Britain, June 18, 2019. HENRY NICHOLLS / REUTERS
When asked if he thought the Twilight star may be too young to play the character, the 62-year-old scoffed: No, no. He must be in his 30s. How old was (Sean) Connery? Hes ready now.
The British heartthrob may not be available to play the super spy, however, as it was recently revealed hes landed the role of Batman in a new DC Comics movie due out in 2021.
Tricked-out Aston Martin built for James Bond heading to auction
Bohemian Rhapsody star Rami Malek unveiled as new James Bond villain
Danny also opened up about why he initially signed up for the Bond 25 project and hinted that, while he had reservations over the gig, the money was too tempting.
Youve got to go into that stuff optimistically. Its like falling in love. You cant go in guarded and trying to protect yourself, he shared. You have to be open-hearted and prepared to be hurt  and so what if you get a bit of bruising? You get well-paid and well looked after. At the end of the day, these are champagne problems.
Bond 25  which is yet to receive an official title  will hit theatres April 2020.
http://torontosun.com/entertainment/...ext-james-bond

Jun 25th, 2019
Hidden camera found in women's washroom on 'Bond 25' set; man arrested
WENN - World Entertainment News Network
Published:
June 24, 2019
Updated:
June 24, 2019 4:14 PM EDT
Pinewood Studios is pictured from a helicopter on June 13, 2015 in London. (Carl Court/Getty Images)
British police officials have arrested a man for allegedly planting a hidden camera in a womens restroom on the set of Bond 25.
Bosses at Pinewood Studios, near London, called in cops last week after the device was found in an area where director Cary Fukunaga was shooting the new 007 blockbuster.
Thames Valley detectives have since taken 49-year-old Peter Hartley into custody and charged him with voyeurism, according to Britains The Independent.
Further details about the case have not been released, and its unclear how, if at all, Hartley is connected to the studios or the Bond production.
A statement from Pinewood bosses reads: We take this issue very seriously. We reported the incident to the police and are supporting them with their investigation.
The spy camera scandal is the latest headline-grabbing incident for Bond bosses  Fukunaga was hired last summer to replace Danny Boyle as director after his abrupt exit, while leading man Daniel Craig was injured as he filmed on location in Jamaica last month.
Crew member injured during blast filming for Bond 25
Director Cary Joji Fukunaga denies crew mutiny on James Bond set
Danny Boyle: Robert Pattinson should be next James Bond
Filmmakers are also facing an investigation by Health and Safety Executive (HSE) officials after a controlled explosion on set went awry earlier this month, causing a minor injury to one crew member and damaging part of the 007 stage.
http://independent.co.uk/news/uk/cri...-a8970106.html
http://torontosun.com/news/crime/hid...t-man-arrested 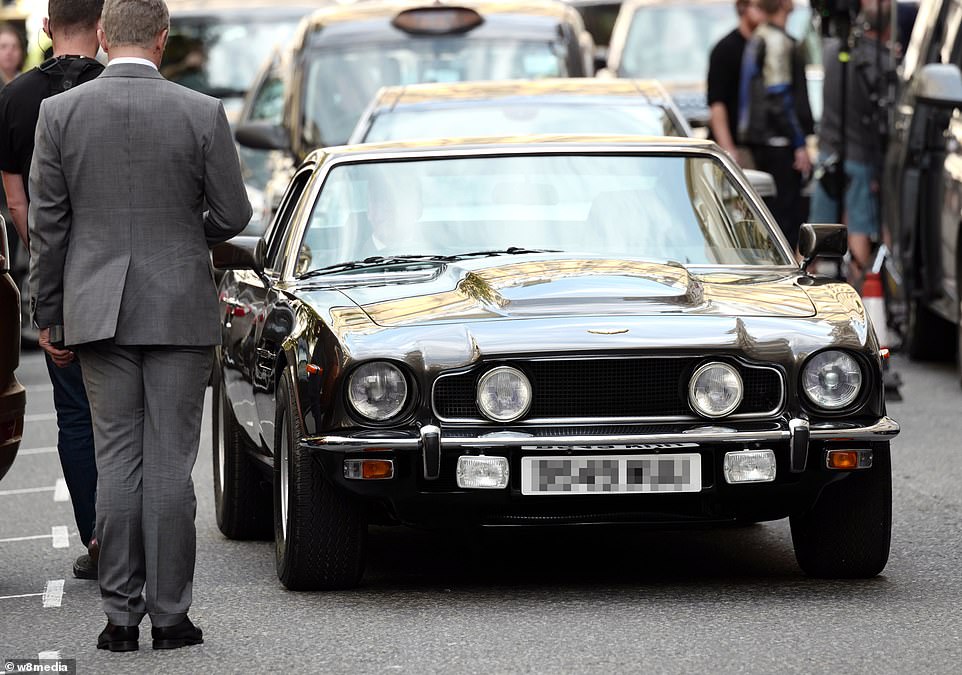 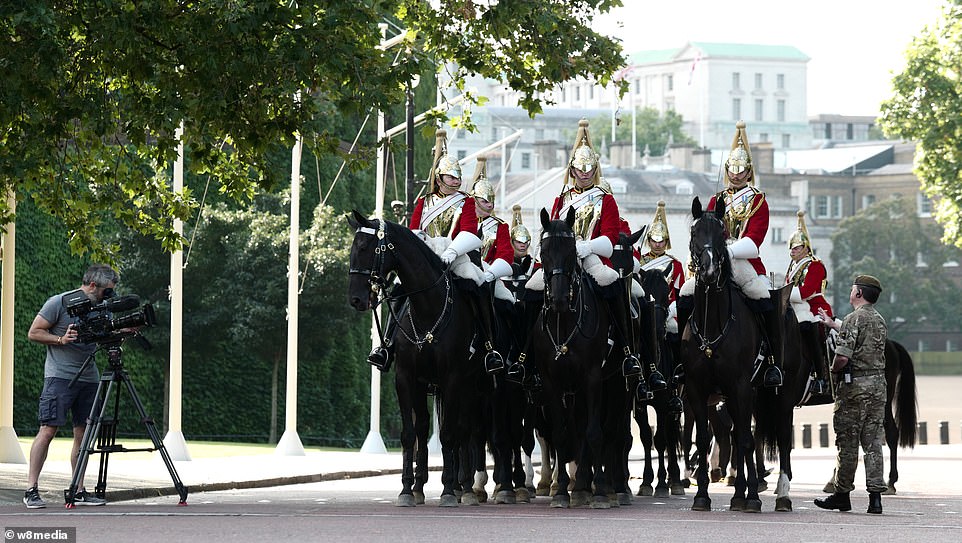 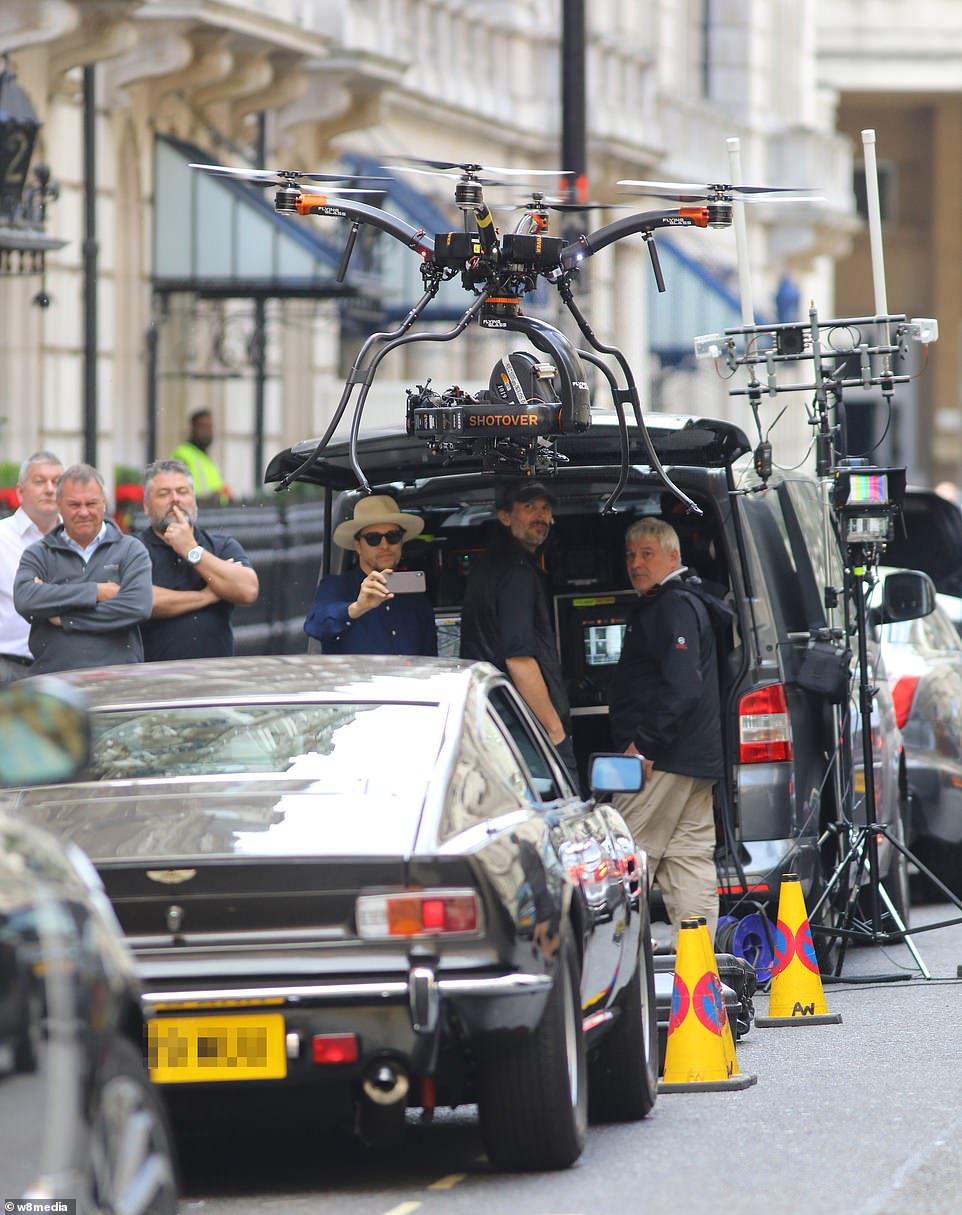 Jun 30th, 2019
How about a black, gay Bond transgendering into a woman for the next one?

We won't ask what "Q" is supposed to stand for.

How about a black, gay Bond transgendering into a woman for the next one?

We won't ask what "Q" is supposed to stand for.

Is that a sabre in your scabbard or are you just glad to see me?