spaminator
#1 Aug 3rd, 2019
Tourist boaters in Alaska likely killed by falling glacier ice
Reuters
Published:
August 2, 2019
Updated:
August 2, 2019 11:52 AM EDT
An aerial view shows people canoeing on the lake at the terminus of the Valdez Glacier, located east of Anchorage, Alaska, U.S., July 30, 2019. (Open Earth Project via REUTERS)
ANCHORAGE  The bodies of three boaters from Europe who died in an Alaska lake were surrounded by frozen debris, a sign that the victims were killed by ice that fell from the melting glacier that feeds the lake, officials in the city of Valdez said on Thursday.
The victims were identified by the city as two Germans and an Austrian and were found dead on Tuesday morning in Valdez Glacier Lake, about 120 miles (193 km) east of Anchorage.
The victims were found in an area that was littered with floating icebergs, glacial slush and challenging terrain for recovery, said a statement released by Valdez city officials.
Those conditions, plus the location of the remains near the toe of Valdez Glacier, suggested that falling glacial ice killed the boaters, said Sheri Pierce, a spokeswoman for the city government.
Because of the ice debris in the area where they were found, that is what leads us to suspect that is what happened, Pierce said.
One of the victims had severe head trauma, the city said earlier in the week. The case is being reviewed by the state medical examiners office to determine the cause of death, Pierce said, adding that there were no eyewitnesses to the incident.
The victims were identified as Manfred Brida, 62, of Austria, and Maria Elisabeth Schroer, 68, and Albrecht Paul Thomas Schroder-Shroer, of Germany.
The three had been boating in an inflatable canoe-type craft, which was recovered from the scene, along with the victims other belongings. The bodies were discovered Tuesday morning by kayakers.
Valdez Glacier has been retreating dramatically and shedding ice into the lake, which is expanding, according to the U.S. Geological Survey.
Falling glacial ice has caused other deaths in the past in Alaska and other northern regions.
A 32-year-old hiker was killed after glacial ice fell on her last summer, and on the same day in a different location, a 5-year-old boy hiking with his family was killed by a large rock that tumbled off a different glacier.

Aug 3rd, 2019
Must be that Alt Reich Global Cooling glacial advance going on.

Aug 4th, 2019
I bet Climate change will be blamed in one way or another

You figure that someone decided that global warming was a good thing, switched a switch, and the Arctic ice melted all at once?

It's Summer. You've got time on your hands. Take a correspondence course. Finish High School.

Aug 4th, 2019
Happens all the time there are all kind Youtube videos showing accidents & near accidents with people fleeing large chunks of falling ice.

You figure that someone decided that global warming was a good thing, switched a switch, and the Arctic ice melted all at once?
It's Summer. You've got time on your hands. Take a correspondence course. Finish High School.

Why? I already know there is still ice covering the North and it won't be ice free for a very long time again, if ever.

Why? I already know there is still ice covering the North and it won't be ice free for a very long time again, if ever.

You know all that do you? You're smarter than most of the scientists on the planet?

Aug 7th, 2019
Did I miss something? Is the arctic ice free over night? If it was the tourists would still be alive

Aug 7th, 2019
It's not like its unusually hot up north or anything.

Aug 8th, 2019
So I did miss where the ice all melted and the unfortunate tourist news was false OK carry on

You know all that do you? You're smarter than most of the scientists on the planet?
No, you're not.

show us these smarter scientists ya effin Fraudulent pizza boi

Did 30,000 Scientists Declare Climate Change a Hoax?
More than 30,000 people may have signed a petition challenging the veracity of anthropogenic global warming...
https://www.snopes.com/fact-check/30...limate-change/


On May 16, 2013, President Obama tweeted that “Ninety-seven percent of scientists agree: #climate change is real, man-made and dangerous.”

How, then, has nearly everyone from President Obama on down come to buy the claim of a 97 percent consensus? The figure comes from a 2013 article in Environmental Research Letters by Cook et al. titled “Quantifying the Consensus on Anthropogenic Global Warming in the Scientific Literature.”

They reported that “Among abstracts expressing a position on AGW, 97.1% endorsed the consensus position that humans are causing global warming” (emphasis added).

The 97 percent figure went viral and, not surprisingly, the qualifying phrase “expressing a position”—the fine print, if you will—got dropped. But those three words expose the false assumption inherent in the Cook et al. methodology.
https://skepticalinquirer.org/2015/1...lobal_warming/


You pedo luvin' mossad colluders just don't stop do you? How many times did you ride on epstien's jet little boi?
Last edited by Danbones; Aug 8th, 2019 at 04:48 PM..

It's not like its unusually hot up north or anything.
Everything is fine

LOL yes, where the ice that is supposed to be gone by now is, because liebarrels are dum dums..and racist nazis.

...and just plain out full of Sh!T stupid.

The most frequently cited source for a “consensus of scientists” is a 2004 essay for the journal Science written by science historian Naomi Oreskes (Oreskes, 2004)...

... Although not a scientist [sic], she concluded 75 percent of the abstracts either implicitly or explicitly supported IPCC’s view that human activities were responsible for most of the observed warming over the previous 50 years while none directly dissented.

Oreskes’ essay, which was not peer-reviewed, became the basis of a book, Merchants of Doubt (Oreskes and Conway, 2010), and an academic career built on claiming that global warming “deniers” are a tiny minority within the scientific community, and even a movie based on her book released in 2015. Her 2004 claims were repeated in former Vice President Al Gore’s movie, An Inconvenient Truth, and in his book with the same title (Gore, 2006).

It is now widely agreed Oreskes did not distinguish between articles that acknowledged or assumed some human impact on climate, however small, and articles that supported IPCC’s more specific claim that human emissions are responsible for more than 50 percent of the global warming observed during the past 50 years. The abstracts often are silent on the matter, and Oreskes apparently made no effort to go beyond those abstracts. Her definition of consensus also is silent on whether man-made climate change is dangerous or benign, a rather important point in the debate.

Oreskes’ methodology was flawed by assuming a nonscientist [sic] could determine the findings of scientific research by quickly reading abstracts of published papers. Indeed, even trained climate scientists are unable to do so because abstracts routinely do not accurately reflect their articles’ findings.
https://www.masterresource.org/heart...us-97-percent/ 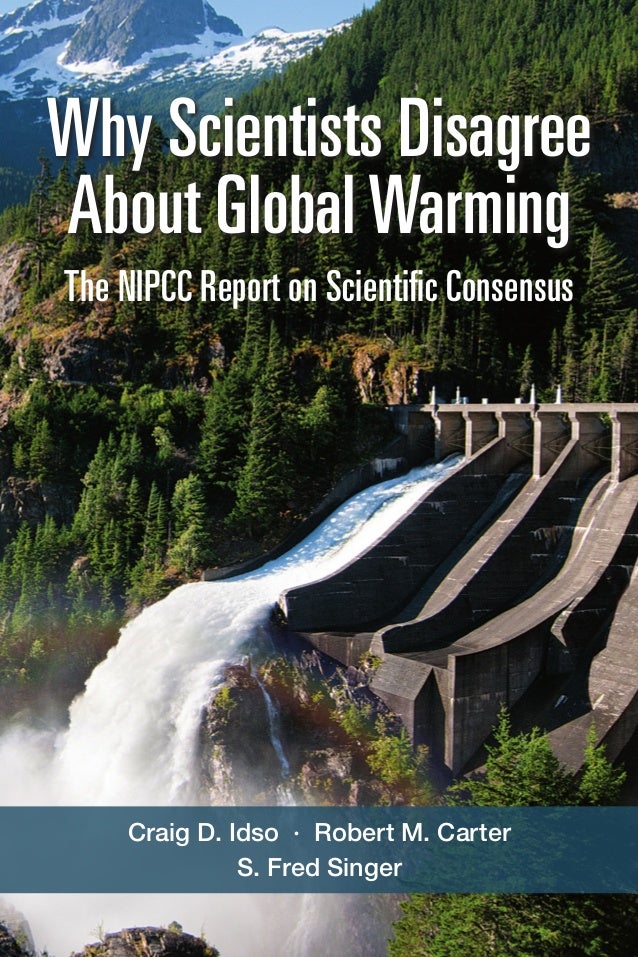 WHY SCIENTISTS DISAGREE ABOUT GLOBAL WARMING

ABOUT THE BOOK: The most important fact about climate science, often overlooked, is that scientists disagree about the environmental impacts of the combustion of fossil fuels on the global climate. There is no survey or study showing “consensus” on the most important scientific issues, despite frequent claims by advocates to the contrary.
https://www.heartland.org/publicatio...global-warming