Blackleaf
#1 Dec 16th, 2005
Just days after the French did the world's first face transplant (but only a partial one), the British look set to get one over on the French by becoming the first to carry out a FULL face transplant. 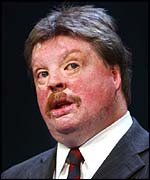 
BRITISH doctors are set to carry out the worlds first TOTAL face transplant.


Surgeons have just had the OK to look for a suitable patient to receive a donor face. If the patient is approved, the amazing op could be carried out within months.

So far around 20 people are believed to have asked to be considered for the pioneering surgery.

The move comes two weeks after French docs replaced the nose, mouth and chin of Isabelle Dinoire, 38, who was mauled by her dog.

Yesterday burns expert Professor Peter Butler, of the Royal Free Hospital in London, said he was relieved to get the go-ahead from the ethics committee.

He said one of the biggest obstacles were fears that the face of the donor would still be recognisable on the person who received it.

But a computer simulation has shown that a donor family would not recognise the face on the recipient.

Prof Butler added: It is great because we are now able to do it. We can now look for a patient.

But the ex-Welsh Guardsman, injured when the Sir Galahad was bombed by Argentinian planes during the 1982 conflict, said he would NOT have the op, but backed it for other victims.

It needs to be another option for people who have serious facial trauma who feel life is over unless they have something done.

People have taken their own lives because they cant stand the way they look.

Once a patient is selected Prof Butler must apply to the hospitals ethics committee again for approval to carry out the operation.

If it goes ahead around 30 staff will be involved in the 14-hour procedure.