The force has left him. RIP

May 3rd, 2019
Wally's mighty pissed that a great hockey player was a great Liberal. He tends to judge hockey players on their political beliefs

Wally's mighty pissed that a great hockey player was a great Liberal. He tends to judge hockey players on their political beliefs

I wonder what he thinks of Vladislav Tretiak?

I wonder what he thinks of Vladislav Tretiak?

I remember an interview with him, at the time. A Canadian reporter asked him what he did in the Soviet Union when he wasn't playing hockey. He said that he was a Captain the the Red Army. What did he do in the Red Army, he asked? I have a platoon of goalies under me, was his answer.

The force has left him. RIP

Imagine having to grow all that body hair just to play a Wookie.

When Lord Nelson died he was 5 foot tall.
His statue in London is 15 feet tall.
That's Horatio of 3:1 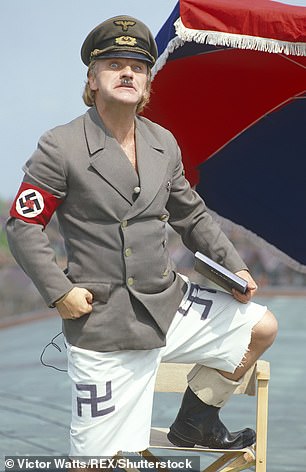 Tributes have been paid to comedian Freddie Starr who has died aged 76.

The Merseyside-born comic, singer, impressionist and actor was found dead in his home in the Costa Del Sol region of Spain, the Sun said.

Comedian Bobby Davro described him as "the funniest man I have ever seen", while presenter Amanda Holden said he should be "remembered with a smile".

Davro tweeted: "I'm so sad we have lost one of our greatest comedy talents."

Britain's Got Talent judge Holden added: "Sad to hear of Freddie Starr passing today. His style may have fallen out of comedy fashion and favour - but it's important to recognise his once huge popularity and fame."

She added: "I hope his legacy is not smalled down and he's remembered with a smile."

"A true clown who could also sing like Elvis," he added. "A total one off. RIP."

The BBC has not been able to confirm the reports, however Euro Weekly News is reporting the coroner in Malaga has confirmed to them that Starr died of natural causes.

Starr rose to prominence in the early 1970s after appearing on the TV talent show Opportunity Knocks. He starred in several other TV programmes in the 90s and famously featured in The Sun's "Freddie Starr Ate My Hamster" headline in 1986.

In 2012, he was arrested by police investigating allegations of historical sexual abuse but he was never charged.

A "Hamster" ... is that what you Brits call that body part?

My first crush is gone. RIP

He was the best when live TV was funny. RIP

What a strange coincidence she died in FA Cup Final week.

Walter had a Gollywoggle sitting there on the TV between the bunny ears and tinfoil.

Walter had a Gollywoggle sitting there on the TV between the bunny ears and tinfoil.

Actually had a rotor on the antenna.

May 19th, 2019
World's top UFO hunter dies aged 84 without ever seeing one during his 62 years of research

The world's top UFO hunter - who never saw a flying saucer in 62 years of research - has died aged 84. Stanton Friedman was worshipped by thousands of alien believers across the world.

The world's top UFO hunter - who never saw a flying saucer in 62 years of research - has died aged 84. Stanton Friedman was worshipped by thousands of alien believers across the world.

May 21st, 2019
Niki Lauda has died at age 70. He was a 3 time F1 World Champion. He was involved in a fiery crash at the Nurburgring in 1976, but returned to race, badly scarred and with nerve damage, and just missed taking the championship in the same year. He won the Championship in 1975, 1977 and 1984 for Ferrari and the last for McLaren. He subsequently ran his own airline and then acted in consulting and managerial roles for racing teams including McLaren. He had a lung transplant last year, the result of the fiberglass fumes he inhaled in the crash, which is as noxious as asbestos and knocked a good decade off his life.