United, who midfielder Stiles played for between 1960 and 1971, paid £188,200 for the medal at an auction of football memorabilia in Scotland (where's there a better place to show off items of England's 1966 World Cup winning memorabilia?).


Stiles said he had intended to leave his mementoes to his children but decided to sell them after being unable to divide them up between his three sons.


These medals are, of course, priceless. English footballers who have won a World Cup are a very rare species.


As well as being a member of Bobby Moore's legendary England team that beat West Germany 4-2 in the 1966 World Cup Final, he was also a member of the Manchester United side who became the first English team to win the European Cup in 1968.


A 1966 World Cup winners' medal belonging to England player Nobby Stiles has been bought for a record-breaking sum by Manchester United.


The soccer legend's former club paid £188,200 for the medal at an auction of football memorabilia in Edinburgh.


The price trumped the £165,000 fetched by team-mate Alan Ball's own World Cup medal five years ago.


Stiles, 68, said he had intended to leave his mementoes to his children but decided to sell them after being unable to divide them up between his three sons.


The footballer, who suffered a stroke in June, said: "It was always my intention to leave the entire collection to my children.


"But I have three sons — how do you fairly divide up this sort of collection between them?


They have each selected some pieces they would like to keep for themselves."


Manchester United bought several of the 45 lots, which a representative from Convery Auctions said would be displayed in the club's museum.


Stiles' Manchester United European Cup winners' medal from 1968 and the blue shirt he wore during that triumphant match against Benfica went for £49,402 and £30,582 respectively.


How Stiles helped England to victory in 1966 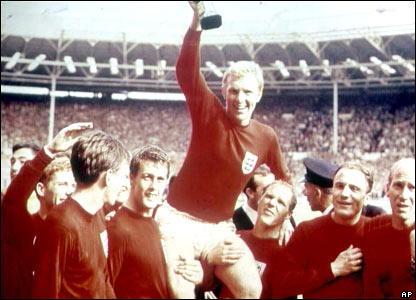 Nobby Stiles, famous for his toothless grin, was a member not only of the only England team to have won a World Cup but also of the Manchester United team who, in 1968, became the first English team to win the European Cup, wrestling the trophy from the grasp of Scottish giants Celtic. Stiles made his debut for England in April 1965 during a 2-2 draw with Scotland at Wembley. Bobby Charlton was the only certainty in Alf Ramsey's midfield for the upcoming 1966 World Cup. Alf needed to create a trio of players to complement Charlton and among those was the requirement for a "spoiler". Stiles was tested for this role in the friendly with Scotland. He kept his place for eight of the next nine internationals, scoring the only goal in a Wembley friendly win against West Germany along the way, and his place in the starting XI for the tournament seemed set in stone by the time Ramsey confirmed his World Cup 22. Stiles won his 15th cap in England's opening match of the tournament, a 0-0 draw with Uruguay. Stiles then played every minute in England's next two World Cup group games, which were 2-0 victories over France and Mexico, and the 1-0 victory over a dirty and violent Argentina team in the Quarter Final which probably started England's rivalry with the South Americans. In England's Semi Final against Portugal, Stiles performed an effective man-marking job against the brilliant, prolific goal-scorer Eusebio, probably the most skilful player in the tournament. Stiles effectively nullified Eusebio, with the Portuguese's only goal during a 2-1 win for England coming from a penalty. Stiles's 20th cap came in the next match - the Final against West Germany. He played a strong, tough match as England saw a 2-1 lead levelled with the last kick of the game before Geoff Hurst completed a famous hat-trick (the only one ever to be scored in a World Cup Final) to win the competition in extra time. At the final whistle, Stiles did a spontaneous jig with the Jules Rimet Trophy in his hand while holding his false teeth in the other!