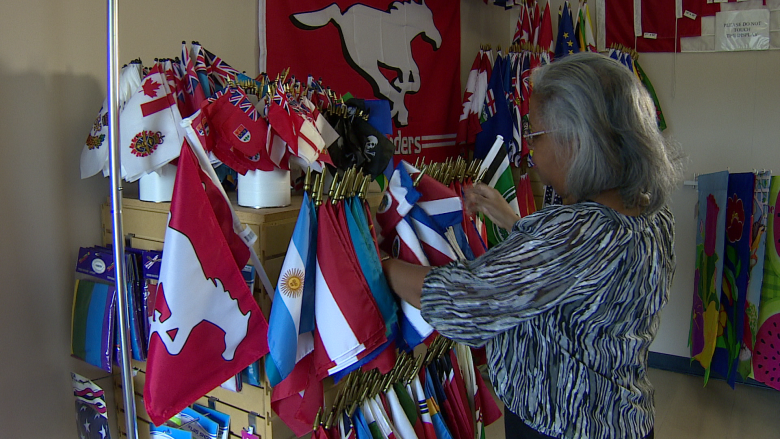 A Calgary shop has pulled the Confederate flag from its shelves as an emotional debate is underway in the southern United States over flying the controversial flag.

The contentious issue has surfaced following the arrest of Dylann Roofe, 21, who is accused of last week's massacre of nine people at a historic black church in Charleston, S.C.

Heather Hansma, manager of The Flag Shop, said she received an email from the Edmonton owners of the shop, asking her to remove the Confederate flags from the store shelves immediately.

"I sell about 25 Confederate flags a year, mostly to young kids," said Hansma. They are mainly young men.

"They put them on their ATVs, or other big trucks; that's my clientele for that flag. I don't think they know the history."

Except they may know the American pop culture reference to The Dukes of Hazzard television show of the '70s and '80s, which featured a Dodge Charger named General Lee with a Confederate flag emblazoned on the roof. Though there were no historic references to the Civil War era in the show, the flag is often a symbol of racism. In fact, it was adopted as a symbol by the Ku Klux Klan in the U.S. in the 1960s.

Meanwhile, on Tuesday, many major retailers across the United States stopped selling the flag or merchandise depicting the flag, including Sears, Walmart and Amazon.

But one man in Calgary's Bowness community will keep flying his confederate flags. The homeowner, who only gave his name as Ray, has two of the flags waving in the front of his house on Bowness Road. "It's just a goddamn flag," he said when asked by a CBC reporter if he'd heard about the controversy.

That attitude concerns Buk Ka Bongo Bukasa, a pastor in southeast Calgary. "Whenever you see it, it's just like a wound in the past."

But not to worry folks, you can still buy a Confederate Flag at Proud to be A Rebel for 1/3 the price it was sold for in some Canadian Shop.

As a matter of fact I would check online first for a flag, you could by Made in China for 1/3 price this Calgary Shop Is selling them for anyhow...