The view from here

(Above) "The Ladder", photographed at Lacock Abbey, Wiltshire in 1844 (by Fox Talbot)

Lacock Abbey was the home of Fox Talbot, a pioneer of early photograph and who invented the negative system.

(Below) The construction of Nelson's Column in London in 1843, just 38 years after Nelson's victory at the Battle of Trafalgar (Fox Talbot 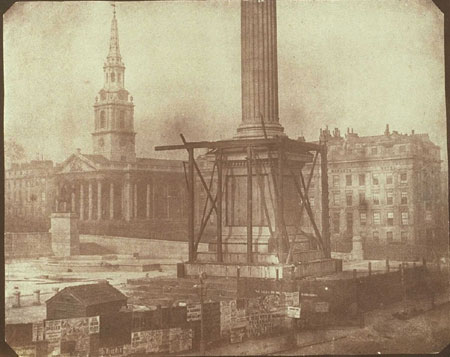 Tate Britain's 'How We Are' is the gallery's largest-ever photography exhibition.

Covering more than 150 years, the show's 500-plus pictures by more than 100 photographers provide an extraordinarily rich portrait of British life. Here, we asked six famous Britons, from Beryl Bainbridge to Billy Bragg, to select their favourite images

View our slideshow to see some of the best shots

Author of 24 novels including Forever England, According to Queeney and Master Georgie


The idea of Britishness didn't loom out at me from these photos. The modern-day colour ones show British life, I suppose, but I'm not interested in that idea. I prefer to think of the Britain from my childhood.

The group photo of patients at Roehampton Hospital looks so posed - they must have had to sit so still for the photographer. It reminds me of Southport during the war; there was a hospital for airmen and they all wore blue pyjamas and had terrible, terrible burns.

The Hugh Welch Diamond images of psychiatric patients made me wonder about the definition of psychiatric. Were they born simple; did they drink? It was probably biased toward the poor, beaten up and uneducated. You look at them and wonder about their terrible lives. I also like the image of the gunshot wound. It's amazing how people survive wounds like that. I'm fascinated by injuries and medicine. When I was in my teens I would have rather liked to have been a doctor, but you had to have Latin in those days.

There are two images of men in bowler hats: a stern figure with the Foyles shop name prominent behind and the man by the Theatre-Zoo (and I'm curious what 'Theatre-Zoo' actually means). The interesting thing is that one's from the Forties and the other from the Sixties, but they don't look any different. It's the same gentleman standing there assiduous in his bowler hat with his newspaper.

That's exactly how people were.

I think the photograph of Edinburgh is almost my favourite. It's beautiful. If you block out the aeroplane with your finger - that lighting, the clouds: it could be a painting. It's so high, I wonder how they took it. I think colour destroys pictures. I turn the colour off on my television because I think black and white makes things stronger, more alive. There are too many colours now, with all the adverts and streetlights and God knows what.

When I was a kid I thought I was lucky to be British; I had a weird kind of pride about my country. I say weird because these days you have to be careful about coming out of the patriotic closet in case people think you're a jingoistic flag waver. But these photos made me feel proud and strangely homesick, especially for Leeds, where I was born.

Stonehenge is regarded as classically British - but it's boring. Standing around with headphones on in the cold is overrated. You're not allowed within 100ft of it, and after an hour-and-a-half you start to believe the audio-guide voiceover when he says: 'We will never truly understand why Stonehenge was built.' I'm fond of this picture because there's no visitors' centre, no coaches, no cagoules. We are no closer to understanding it, but we're standing a lot further away. By contrast, the photo of the chalky hills of the British coastline makes me think there are places we should celebrate more. They'd be a multimillion-dollar attraction in America with 'White Cliff' mugs that played Vera Lynn when you picked them up.

Britishness isn't only defined by famous places. It's also about the ordinary - streets, shops. I like the photo of Robin Hill Drive. I'm a fan of suburbia. It's where I came from and to where I will return.

Britain's also about boy meets girl. Or maybe boy meets boy. The father in the photo of military wallpaper looks like one of those dads determined not to have his son grow up gay. I imagine the kid's still got the paper in his room 19 years later, and that it's an embarrassment when he gets a girl back after a night out in Newport. Especially because he fancied her brother. If the Smiths were still going, this would make a good album cover.

I picked the nude girl because there's something a lot more exciting about old photographs of girls' bottoms. Nowadays you can see a girl's bottom in your average shower-gel advert. I find the girl in the Southam Street photo really fit. Sometimes it's hard to imagine that people have always been good looking, but she's natural and tomboyish.

Director of civil-rights pressure group Liberty. Voted into the Top 10 in the 2005 BBC 'Who Runs Britain?' poll


There were many quintessentially British images that caught my eye: the punk - for so long associated with creativity and rebellion; and the buffet is fantastic - look at those wonderful 'cheesy pineapply bits', like Abigail's Party. The image of the white owl with the mouse was an opportunity to pay tribute to JK Rowling's wonderful Harry Potter books as a popular synthesis of Britain - old and new, the progressives and the multiculturalists and reactionaries.

The picture of the woman being fitted for a gas mask, taken during the Second World War, should remind modern politicians with their 'war' metaphors that we have endured truly existential threats in the not-so-distant past. The image of the young marine shows the real face of the military. Not pomp and politics. Not top brass and brass bands. Real young lives worthy of leadership and protection. Not to be spent lightly or in vain.

And the police identity photos of arrested suffragettes display our history of protest; the struggle for democracy in this country was later and harder than we sometimes remember.

The photo of the police presence as the National Front march through Lewisham is typical of the pictures that, during my childhood, left me feeling somewhat ambivalent about the Union flag and who owned it. The antidote to that is the image of the young black kid on his bike. Who owns the flag?


How can one capture the essence of Britain in a photograph? That question's answered by these photos, each of which seems to encompass a small part of this beautiful dystopia.

I remember when I was 11 being given my first camera (a cheap disposable). I spent the day running through Kent taking mundane photographs of cornfields and flowers. I came to a whitewashed wall with 'The city where my heart lies broken on a thousand streets' scrawled on it in bold black marker. I still have the photo I took of it, as I connect it to my childhood and eventual coming of age.

I picked these photographs because they remind me in some way of that image. Though some seem random or disconnected, they all have a link to Britishness. McBean's Frances Day seems to me to be a surrealist look at Britain's decline into commercialism, a woman literally being swept out to sea by her own vanity.

Cecil Beaton's obscure view of St Paul's with its silent movie black-and-white tones captures the monument's immutability. I also loved Dorothy Wilding's Diana Wynyard portrait - it reminds me of my house in Kent again. My father has always loved Art Deco and used to hunt for cheap pieces in the local antique shop - this is something he would love. I like the clean lines; she looks like a Greek sculpture, almost merging with the structure she leans on.

The portrait by Jason Evans represents the diversity of cultures in Britain, the red-and-white clothing of the man standing out against the green behind. It is definitely a statement photograph.

Chartists on Kennington Common, London, 1848. It is the world's first photograph of a crowd. Chartism was a movement for political and social reform in Britain. It was possibly the first mass working class movement in the world.


What photography tells us of British identity is not specially cheerful or encouraging. Some powerful trends are apparent in these pictures: muddled technology, a taste for delusion, grubby sex and an almost painful yearning for a lost Arcadia.

The first photograph of a crowd may have been of British reformers The Chartists in 1848. Robert Howlett's famous swaggering portrait of Brunel was the result of very self-conscious image manipulation. In Wales, John Thomas photographed Welsh national costume, itself a fiction designed by Lady Llanover for the 1853 Eisteddfod. The British, it seems, invented the deceptive pictorial spin and the 'pseudo event' long before Daniel Boorstin coined the term in 1962.

Musician and one-time Bard of Barking, political activist and author of The Progressive Patriot


The future threatens the tranquillity of Britain in many of these photos: an old couple in grey and beige wait at a bus stop, determinedly ignoring the brightly dressed people who mill around them; two clowns juxtaposed with a prince in fancy dress; a statue memorialises on a summer's day, a Tesco superstore creeps up to fill the open space beyond.

The past just can't keep up. Witness the plight of the Burry Man, a traditional figure who has appeared annually in West Lothian since time immemorial covered in the sticky burrs of the burdock plant and crowned with roses. By the Seventies, his exertions have become such that he needs to support himself with both arms on the bar while he takes libation.

But those new people in bright-coloured clothes are now part of society on their own terms, whether the old couple at the bus stop like it or not. And what did those names on the war memorial fight for, if not the right to be treated equally at the checkout? The clown is now more loved than the prince.

No matter how much traditionalists seek to use the past as a yardstick by which to judge the present, looking at these photographs it is possible to measure just how much better our lives have become.

· How We Are: Photographing Britain runs at Tate Britain from 22 May to 2 September. The Observer is media partner. For details, go to www.tate.org.uk