The magnitude-6.4 Independence Day quake was centered in the Ridgecrest area north of Los Angeles
https://www.nbclosangeles.com/news/l...512225192.html

Just a day after a July 4 jolt, Southern California is rocked again by an even stronger earthquake

A day after a powerful quake rattled Southern California, residents across the region were shaken by a 7.1 temblor that rattled for up to 40 seconds, knocked out power and frayed already thin nerves.
https://www.nbclosangeles.com/news/l...512288562.html


Well, It turns out the sun based climate people were also right about earthquakes being triggered by the same scientific phenomenon as the changes in the jet stream and the increase in COOLING clouds which are caused by a lack of solar radiation shielding us from ( cooling cloud causing ) COSMIC radiation.

I think we are going to see more of this close to home in the near future severing things like power lines, phone/ computer lines, road ways, and water systems.

Jul 6th, 2019
California could be hit by a BIGGER quake within days:

Geologists say the 6.4-magnitude quake will produce an aftershock which could be even more powerful

It was the most powerful earthquake in Southern California since a 7.1-force quake in October 1999
https://www.dailymail.co.uk/news/art...uake-days.html

Jul 6th, 2019
I assume the Rockies will hold back the water even of the rift move all the way from Mexico to Alaska. Let er rip.

Jul 6th, 2019
California is being punished for her sinful ways.

Jul 6th, 2019
Do you have any idea what race of people have the most money and influence there??

Do you have any idea what race of people have the most money and influence there??

Aleutians were first then St Helens rumbling then the QCIs 2 days ago and now down in CA.

Lots of movement on the entire eastern Pacific plate.

Aleutians were first then St Helens rumbling then the QCIs 2 days ago and now down in CA.

Maybe, you should sacrifice a virgin.

Maybe, you should sacrifice a virgin.

Maybe, you should sacrifice a virgin.
Good luck finding one.

Well Yorgie, there are other places to look for virgins other than the illegal immigrant invasion you know.

We could feel it in the OK.

While the volcano alert level hasnt been raised, the swarm of activity is a reminder that Mount St. Helens is the most active volcano in the Cascade Range. It was the last to erupt, and likely also the next to erupt

Maybe, you should sacrifice a virgin.
Good luck finding one.

I'm not sure if the Wahine would appreciate an old fart with a limp dick and a leaky prostrate tho.

A virgin is a virgin.

What's that? The motto of bicycle seat sniffers, everywhere?

Jul 7th, 2019
An earthquake's impact can be predicted - but only after it hits

July 6 (Reuters) - Over the next week, Southern California has only a 27% chance of experiencing a third earthquake greater than magnitude 6, but a 96% chance of going through a tremor of magnitude 5 or higher.

Those precise probabilities were generated by scientists at the United States Geological Survey (USGS), using models based on longstanding principles of seismic behavior and decades of data on aftershocks from earthquakes.

But the same predictive power does not extend to forecasting when and where earthquakes will strike in the first place, experts acknowledge.

"Even if it's a theoretical possibility, it may be a practical impossibility," said Andrew Michael, a California-based geophysicist at the USGS.

A powerful 7.1 magnitude quake shook the remote town of Ridgecrest in the Mojave Desert on Friday evening, a day and a half after a 6.4 magnitude temblor was recorded in the same region.

On average, a quake is followed by an even stronger tremor only about 5% of the time, though it happens more frequently in areas with significant geothermal activity, like the Mojave, according to Michael.

We have you.
I'm not sure if the Wahine would appreciate an old fart with a limp dick and a leaky prostrate tho.

There s nothing wrong with my prostate.

You "prostrate" tells me that you're lying, though.

You can tell all that from over there where you are?

If your place shakes in a quake 'you are close' no matter what the distance is. If you do not feel anything 'you are not close'.

As I discussed the other day, the San Andreas fault is “locked and loaded” and it is way overdue for “the Big One”. Could it be possible that all of this earthquake activity is leading up to something really big? 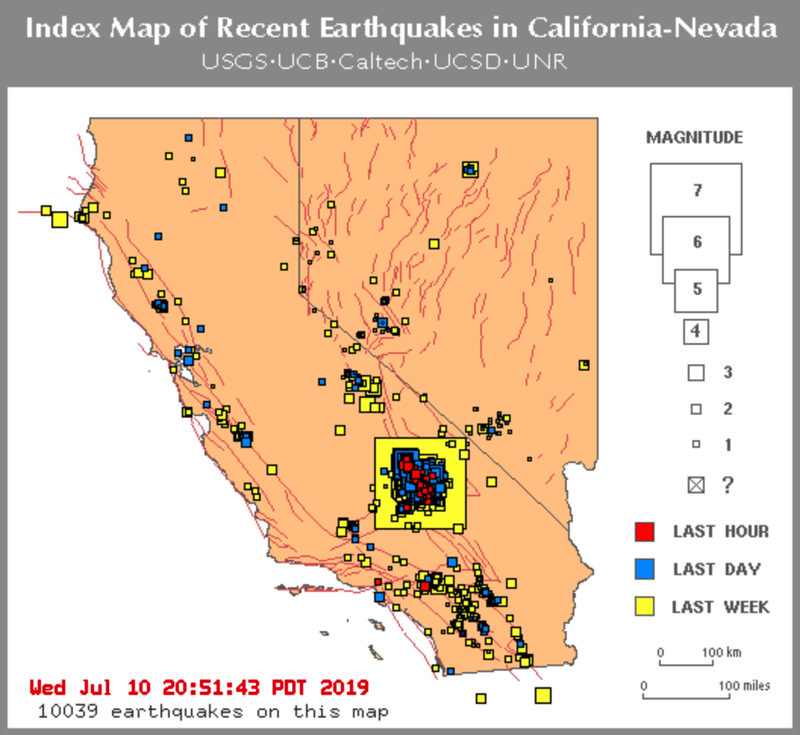 By the way Ridgecrest is nowhere near San Andrea's. They are overthrust faults which are nothing like strike slips faults such as San Andrea's.

Oh come on its all the fracking and climate change.