Giant jellyfish is spotted by divers off Cornwall 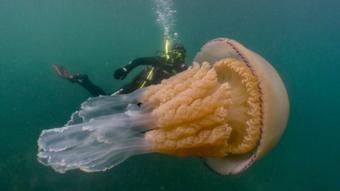 Two divers who swam alongside an enormous jellyfish off the Cornwall coast have said the encounter was a "humbling" experience.

Dan Abbott and Lizzie Daly got up close and personal with the barrel jellyfish during a week-long project documenting marine encounters.

They were originally supposed to be filming blue sharks, but had to revert to "plan b" when inclement weather meant that trip was cancelled.

The image of the jellyfish has gone viral after it was shared on social media.

Mr Abbott, from Colchester in Essex, said that had led to "the craziest three days of my life" but the "feeling of being with it underwater" was the best part of the experience. 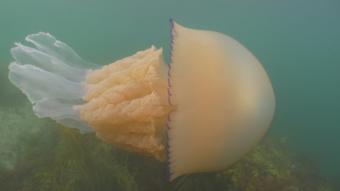 They had travelled around the UK for a week filming a series of marine experiences and documenting them on social media to raise money for the Marine Conservation Society.

Mr Abbott said: "We weren't looking for [the jellyfish] - we didn't know it was going to be there." 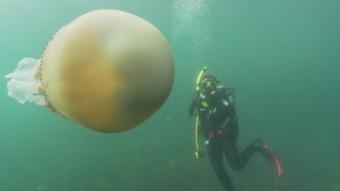 Ms Daly, who is from Wales and a fellow at Swansea University, said she "had her face in some kelp" when she turned round and noticed the huge gelatinous creature.

"I went to have a closer look, only to be surprised by how enormous it was," she added.

Neither of the pair had seen a jellyfish that was close to the same size before and Ms Daly described the experience of diving with the "gentle giant" as "humbling". 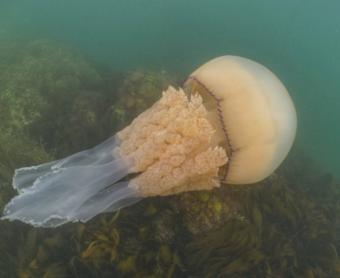 ...in the middle of the St.Lawrence River, and all!!

Jul 17th, 2019
The jellyfish - which isn't actually a fish but a humongous plankton - has no brain, yet it's more intelligent and more conscious than many members of this forum

The jellyfish - which isn't actually a fish but a humongous plankton - has no brain, yet it's more intelligent and more conscious than many members of this forum

Hey, Blackadder. You're the only Brit on here, right now.

Try not to exaggerate, so.