spaminator
#1 Sep 25th, 2019
Green leader Elizabeth May says climate-crisis anxiety fuelling mental-health woes
Canadian Press
Published:
September 23, 2019
Updated:
September 23, 2019 5:52 PM EDT
Green Party Leader Elizabeth May joins climate change activists and students as they gather in Calgary for a protest and "die-in", on the steps of the Calgary Municipal Building in Calgary on Friday, Sept. 20, 2019. The Green party says anxiety about political instability and the looming climate crisis are placing new strains on the mental well-being of Canadians.Dave Chidley / THE CANADIAN PRESS
FREDERICTON  Anxiety about political instability and the looming climate crisis are placing new strains on Canadians mental well-being, the federal Green party says.
The Greens outlined a plan Monday to break down barriers  including insufficient funding and erosion of universal care  they say prevent many people from getting the mental-health care they need.
Green Leader Elizabeth May took the message to Fredericton as part of a push for votes in Atlantic Canada, a region where the party hopes to make a breakthrough in the Oct. 21 election.
May attended a rally in the New Brunswick capital in support of Jenica Atwin, a researcher and program co-ordinator for a First Nations education organization.
The party wants to prioritize expansion of mental-health and rehabilitation services, reduce wait times for assistance programs and put more money into mental-health services in rural and remote areas.
The Greens would also examine climate change-related mental illnesses caused by trauma from natural disasters and extreme weather and the resulting stressful displacement of families.
Canadians are worried about the future of their country and the world, May said in a statement. Its time to make mental health a primary health concern.
The plan includes mobilizing mental-health organizations to prevent illness and suicide caused by anxieties stemming from societal problems such as social isolation and expensive housing.
The ability of provinces to deliver adequate levels of care through the Canada Health Act depends on funding transfers from Ottawa, the party says.
It argues these transfers have not kept pace with rapidly changing demographics and the emerging crises of mental illness and addiction. At the same time, the Greens say, private health clinics, including blood services, represent a creeping two-tiered system, eroding the universal primary model.
Universal health care is under attack, said May. The Green party will fight for mental health care for all Canadians.
The party would:
 treat the opioid crisis as a health-care issue rather than a criminal matter;
 create a national dementia strategy to fund research, though it is unclear how the plan would differ from the one introduced this year by the Liberal government;
 establish a new funding program within Health Canada for peer-led mental-health programs and counselling catering to people of different sexual and gender identities;
 ensure Indigenous Peoples receive the health care they require without bureaucratic delays and create Indigenous-led healing programs using traditional knowledge;
 and create a Guaranteed Livable Income program to ensure no one goes homeless while their mental illness is being treated.
Donald Trump surprised by how many times Justin Trudeau went blackface
MARIN: Trudeaus transgressions should cost him at the polls
LILLEY: Women arent buying Trudeaus feminist act
http://torontosun.com/news/national/...al-health-woes

Sep 25th, 2019
That cuz angry old white guys are spending billions to deny it is happening. Praiz de lard for Big Oil CEOs lying to everyone.

Sep 26th, 2019
NO, it's because morons like you keep trying to terrify everyone into accepting your viewpoint that it's all humanity's fault. But hey, let's just pretend there isn't a 40,000 mile long volcano on our sea floors.
Yes Cliffy, all those under-sea fault zones are actually rather active volcanic features. WAY more active than previously believed in fact. Scientist from both Wood's Hole and the Ocean Observatory have stated quite succinctly that they have measured temps from this vast network that are easily capable of altering the oceans' chemistry AND the global climate. But hey, what the f*ck would they know, right? Either that or they're being paid by dem Big Oil Cee Eee Ohs.


I bet you believe the conspiracy theory about how Big Oil forced gasoline powered cars on everyone too.


By the way Cliffy, how many 12 year periods are there in 65-70 years. I know the answer but we've been hearing the climate doom and gloom and the oft repeated "12 years until we're screwed" predictions since the 1950's.


But with that out of the way, who do you think is behind the big green push? The oil and gas industry. You see Cliffy, some years ago after Bill Clinton was done playing President, he approached the O&G companies in the US and Saudi Arabia and told them that if they put even a fraction of their profits into R&D for alternative forms of energy, they could capture the global energy market. So naturally wind and solar were the answer because what they'd lose in bulk oil sales to power plants, they more than make up for it in bulk natgas sales to power plants because they are selling them even more gas and there's now more natgas plants. And that's on top of those who already use natgas for their vehicles, barbecues, furnaces etc.

Your problem is you think like the prototypical anti-capitalist leftist instead of understanding there's even more profit to be made by the O&G sector with the push to go "green".
Last edited by Jinentonix; Sep 26th, 2019 at 03:44 AM.. 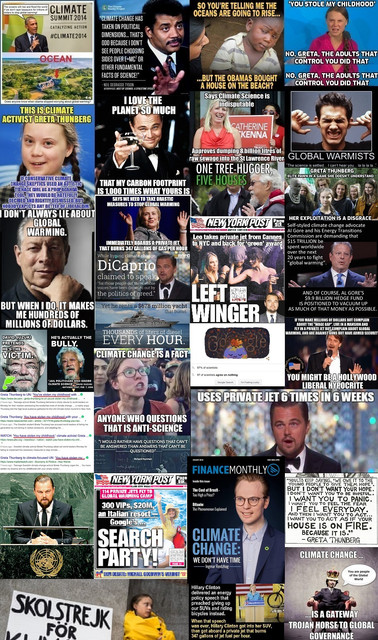 Sep 26th, 2019
Does it seem like the preachers believe their own Schtick? Do they practice what they preach? Does that not seem at least somewhat hypocritical to you? Does that not form the basis to at least do some homework to see why they preach but seem unconcerned themselves?

No, it's because they and you are stupid and/or gullible. I will KEEP repeating this for as long as it takes. There is no climate crisis and the IPCC all but admitted such. In 2018 they admitted that all their predictions and projections were garbage. Seeing as how the climate is a chaotic non-linear system, they cannot accurately predict with computer models what the climate will do. To give you an example of how useless their models are, we're supposed to be about 4 degrees warmer than we currently are.


Now, none of that is to say we shouldn't t least try to clean up our act. But there's a line between cleaning up our act and slitting our throats. 500 scientists signed a letter to the IPCC telling them to knock of the crap because it's causing serious economic harm to the most vulnerable. The WMO, parent organization of the IPCC told them to knock off the alarmism. Ms. "I don't care 'bout no damn court injunction" is quite happy to continue pushing the lie though. She's even willing to wipe her ass with the Constitution to kill off Canada's resource sector. All to push the lie.

Big oil created the AGW scam and you are doing their bidding ya whore.

Oct 13th, 2019
Trumpites hate oil companies as much as Suzuki-ites.