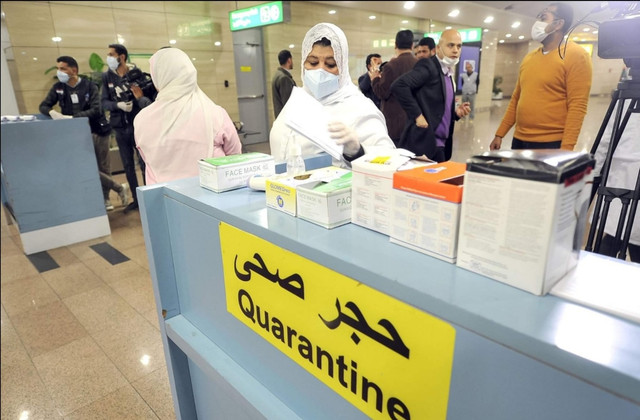 
Here is an article explaining why LIE-berals are NOT making successful efforts to halt the spread of Wuhan Virus!! With some comments of my own in brackets):

By Nsikan Akpan from National Geographic

Disinfection workers wearing protective gears spray anti-septic solution against the coronavirus (COVID-19) at the subway station on February 21, 2020 in Seoul, South Korea. South Korea reported 52 new cases of the coronavirus (COVID-19) bringing the total number of infections in the nation to 156, with the potentially fatal illness spreading fast across the country.

A bus arrives near the cruise ship Diamond Princess, where dozens of passengers tested positive for the novel coronavirus, at Daikoku Pier Cruise Terminal in Yokohama, Japan, on February 16.

An unmitigated disaster. Thats how Lawrence Gostin of Georgetown University describes the handling of the Diamond Princess.

For two weeks, the British cruise liner sat quarantined off Japans coast, and roughly 3,700 passengers and crew were housed inside a giant incubator for the novel coronavirus, which causes the disease officially known as COVID-19. What started as a manageable group of 10 infections on February 4 ballooned into more than 600 cases by Wednesday, when everyone on board was finally allowed to disembark.

(Govt KNEW the ship was a serious incubator and PRETENDED otherwise- with over 1000 crew in the ships belly - living 2 - 4 to a room and each group sharing washroom facilities- and then heading off to prepare passengers food in communal groups and then when work is done- the crew sits down in communal dining rooms FOR THEIR meals - clearly the passengers were quarantined and isolated from each other - BUT THE CREW WAS NOT!!!!!!!!!!!!!!!!!!!!!!!!!!!)

What should have happened is, they [the passengers and crew] should have been disembarked from the boat and placed in isolation or medical quarantines, says Gostin, a professor who is also director of the World Health Organization Collaborating Center on National and Global Health Law.

(And NO GOVT has the cash to pay for that!! When Ottawa was asked to bring several hundred Cdns home from Wuhan - the FIRST QUESTION LIE-berals had was WHO WILL PAY!! It was only after public opinion began to sour - that LIE-berals RELUCTANTLY took action and set up the Trenton military base!!!!!)

For him and other health academics, the Diamond Princess saga speaks to the imperfect legacy of travel restrictions and disease screening. For centuries, public officials have combed travelers for signs of disease, whether it be for cholera in the 1800s or Ebola crises in the last decade, and cordoned them off.

Yet time and again, history has shown that stemming the spread of an infectious disease becomes more difficult when these control methods are deployed inappropriately or unevenly. Border closures protected some farming villages during Spanish Influenza in 1918 and 1919, but they also kept countries like Portugal from obtaining health resources. Meanwhile, the primary spreaders of the diseasetroops in World War Ieasily crossed borders.

(In other words the military forces WERE NOT PROPERLY QUARANTINED for political reasons and thus the Influenza was ALLOWED TO SPREAD!!!!!!!!)

Back then, people barely understood how diseases moved among human populations, but todays epidemiologists have found that the same overarching rule applies to modern outbreaks: Borders are leaky no matter what you do. Now, in the face of COVID-19, these scientists are creating tools that can ostensibly predict the weak spotsand judge whether tactics like the lockdown of Chinas Hubei Province or the Diamond Princess blockade are worth the consequences.

(That is stupid LIE-beral propaganda!! In older days a quarantine was taken MORE SERIOUSLY!! Violators of quarantine could even be shot on sight!! Not knowing what caused disease made quarantine efforts more rigorous!!!!!!!!!!!!!!!!)
Did the Wuhan lockdown work?

Viruses are inherently clandestine, and the one that causes COVID-19 is no exception. As of Friday, this outbreak has infected 76,775 and killed 2,248. Early evidence shows that the new coronavirus takes about five days to manifest symptoms in mild and severe cases, but patients are contagious before these symptoms arise.

(Thus the EARLY VERSION of the lock down DID NOT WORK- as people who were carriers but not showing symptoms WERE ALLOWED to travel and able to infect others before finally being halted by an EXPANDED quarantine area ORDER !!!!!!!!!!!!)

COVID-19 readily establishes itself not only in the lungs, but also in the upper respiratory tract, meaning the nose and throat. A study published Wednesday in the journal Science reports that the novel coronavirus affinity for entering human cells is 10 to 20 times higher than that of other coronaviruses. These habits mean the new coronavirus can more easily hitch a ride via coughs and sneezes, and they may explain why people become contagious before displaying full-blown symptoms.

Those details matter, because the timing of when people become contagious can help gauge if changes in travel policysuch as Chinas transportation bans and international airport screeningare truly keeping the novel coronavirus from crossing borders.

(We have also had reports of movement between China and North Korea by smugglers and thus Wuhan Virus has entered the Hermit Kingdom in spite of the routine paranoia of its security forces!! And we may ask if drug smugglers and others may have played a part in other crowded border areas as well!!!!!!!!!!!!!!!)

Matteo Chinazzi, a network scientist at Northeastern University, has co-developed a way to judge the effectiveness of COVID-19 travel bans, both within and against mainland China. The project hinges on the Wuhan lockdown on January 23, when China restricted movements within the city of 11 million. The model charts how global and domestic commuters flowed before and after this turning point in the outbreak, combining high-resolution population data and disease-tracking algorithms tailored to the ongoing epidemic.

Our model is constantly updated and recalibrated using new information and the updated interventions that different countries are implementing, Chinazzi says. The result offers a readout on the effectiveness of these travel restrictions, and so far, the verdict is mixed.

First, Chinas lockdown of Wuhan likely arrived too late; the model predicts that the novel coronavirus had already established footholds in other major Chinese cities by January 23. That means mainland China was likely already exporting coronavirus cases through other travel hubs, with the model pointing to Shanghai, Beijing, Shenzhen, Guangzhou, and Kunming as the highest-ranked sources.

(So the lock down was TOO LITTLE AND TOO LATE!! In spite of the warnings of a Cdn doctor who warned back in NOVEMBER 2019 that an epidemic was coming based on his unique computer analysis!! And the Chinese doctor who WAS FIRST TO OFFICIALLY WARN about the odd new illness WAS LEGALLY PUNISHED FOR BEING ALARMIST!! The poor guy did not even get to say I told you so - because the Virus KILLED HIM!!!!!!!!!!!!!!!!!!!)

The labs predictions may also explain why the outbreak continues to thrive in certain places, like Japan and South Korea. Rather than lower the odds of transmission, the Wuhan lockdown increased the risk for coronavirus importations for these two countries, which only issued partial transportation bans. Travelers from Wuhan and Hubei Province were blocked, while visitors from other parts of mainland China could still enter.

(NO MODERN POLITICIAN willingly shuts down biz and risks halting the flow of tax revenue to govt coffers - thus travel BANS are anathema to LIE-berals - who are ALWAYS far more focussed on calming the public and putting up an orderly and in control face - even as things fall apart!!!!!!!!!!!!!!!!!!)

Overall, the model suggests that the Wuhan lockdown only delayed the global progression of the epidemic by three to five days. Such delays arent worthless, given that they provide precious time to coordinate a response. But their limited effectiveness should be no surprise, considering research conducted on the last two decades worth of outbreaks.

(So the REALITY is what we have known all along - that air travel is the most effective way of turning an epidemic into a world wide PANDEMIC!!!!!!!!!!!!!)

There is not a lot of evidence that a travel ban would completely eliminate the risk of an infectious disease spreading in the long term, says Nicole Errett, a lecturer at University of Washington School of Public Health and a former special assistant at the U.S. Department of Health and Human Services.

(There is a LIE-beral LIE- a COMPREHENSIVE travel ban - at the first sign of any trouble WOULD LIMIT the spread of disease - and would at least prevent a disease from easily jumping to another continent but such an EXTENSIVE BAN goes against LIE-beral gravy grabbing sentiments!!!!!!!!!!!!!!!)

In the latest issue of the Journal of Emergency Management, Errett and two colleagues reviewed past travel bans implemented for Ebola and SARS, and they reported that most were only effective in the short term. Similar investigations for influenza found that travel bans could delay the spread of epidemics by one week to two months, but the overall incidence of the disease only dropped by 3 percent.

(ONLY A COMPLETE CLOSURE of a border with military force applied to block smugglers and panicked civilians from fleeing the zone will work!!!!!!!!!!!!)

Meanwhile, the methods for spotting the disease among people on the move arent foolproof. Take, for example, the temperature guns that you see pointed at peoples foreheads at airport customs and border checkpoints. On average, those devices are only 70 percent effective at detecting fevers, meaning about one of every four people with elevated body temperatures goes unnoticed.

(And yet always deceitful Cdn LIE-berals told us the airport screening would SAVE US - without mentioning the 1 in 4 FAILURE RATE!! It is this LIE-beral focus on calm rather than common sense that is panicking people !!!!!!!!!!!!!!!!!)

Travelers screening is not some kind of firewall that will absolutely protect from having cases imported into whatever area you're trying to defend, says Jamie Lloyd-Smith, an infectious disease ecologist at UCLA. This is not because [the screening] is being done poorly, and its not because the people who are in charge are being lazy.

(LIE-berals BILLED IT AS A FIREWALL AND THEY LIED!! Reality says the ONLY way to protect the public from a pandemic IS AN IMMEDIATE SHUT DOWN OF AIRPORTS - which LIE-berals have historically REFUSED TO DO!!!!!!!!!!!!!!!!!)

(LIE-berals are far more focussed on promoting their anti racist virtue signalling righteous crap than they are about controlling dangerous disease!!!!!!!!!!!!!!!!!!!!)