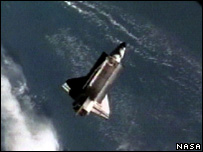 
The US space agency's Atlantis shuttle has had its Wednesday landing postponed after an unidentified object was seen floating near the vehicle.

The delay will give engineers an opportunity to investigate the incident - and time for poor weather at the Florida landing strip to pass.

Atlantis is returning from the space station where it attached solar wings.

The first opportunity for a touchdown at the Kennedy Space Center is now 0615 EDT (1015 GMT) on Thursday.

The mystery object appears on video taken by a shuttle camera. It has been described as small and dark, and coming possibly from the ship's payload bay.

It was noticed as astronauts were testing the vehicle's jets in preparation for the return to Earth.

Mission Control has told the astronauts on Atlantis to hold off packing away the shuttle's robot arm and television antenna in case further inspections are required.

"The question is: what is it? Is it something benign, or is it something more critical we should pay attention to?" said Wayne Hale, the space shuttle programme manager.

"We want to make sure we're safe before committing to that critical journey through the atmosphere."

Even before the unexplained object came to the attention of engineers, Nasa was considering a change to the scheduled landing time because of unfavourable weather forecasts at Kennedy.

Atlantis is making its way home from a construction visit to the International Space Station. The orbiter undocked on Sunday to make way for a Soyuz craft that is heading to the platform with a new crew and the first female space tourist, Anousheh Ansari.

The US businesswoman is expected at the station with the new commander Michael Lopez-Alegria and flight engineer Mikhail Tyurinat at 0524 GMT on Wednesday.

Oct 30th, 2006
did UFO or artificial "moon" delayed the landing.
apparantely, that mysterious object was waste from other/previous space flights.