The The Grizzlies Movie - A Good News Nunavut Story

A Saskatchewan teacher who taught students from the remote Arctic town of Kugluktuk, Nunavut to play lacrosse has been made into the film The Grizzlies.

After having some of the highest teen suicide rates in the world, social studies teacher Russ Sheppard introduced the sport to the northern students. This sparked a wave of changes for the students and teacher alike.

After growing up in the small town of Esterhazy, Sask., Sheppard decided to get an education degree from the University of Saskatchewan and was offered a job in the Arctic Circle.

"I didn't know much about the culture and the land," Sheppard told CBC Saskatchewan's Afternoon Edition. "I was pretty excited to learn about another place in Canada. I decided to go try a year and one became seven."

When he arrived in the late 1990s, the weather was cold but the people in the community were welcoming, he said. It wasn't long before he was treated like family and started to learn their culture.

At the time, the students were good kids but not the best students, Sheppard said.

"The school system was set up to be a place where kids go to learn but maybe not set up to develop a bit of a culture and a higher calling," he said.

"The kids were very true and very open," Sheppard said. "It's really eye opening experience to work with them."

Sheppard learned to play lacrosse while in university. The game really connected with him and he became passionate about it.

"[It] really kind of got into my soul in many ways," he said.

"It's a game that's very physical," he said. "Hitting is happening on every play and it's very skilled. It's a beautiful game in many ways."

When Sheppard decided to introduce lacrosse to the Northern community, most of the students picked it up very quickly and they formed the team The Grizzlies.

"It is a First Nation sport. I think it's been around for thousands of years and I think they picked up on that quickly and they started to understand the history a little bit more and I think really embraced it."

"It's a very physical game and very exhausting, but very rewarding," he said. "When you get through a lacrosse game  win or lose  and you've played hard, you really understand that you've left everything on the floor and there's a gratification for that."

In time, Sheppard started to see a change in the community as students stopped limiting their expectations, he said. At the time, the hope was that students would graduate Grade 10.

"That to me is totally ridiculous," he said. "Those kids are as smart or have more perseverance and character than many kids I've met in other areas of the country and world."

They started to build expectations and created a culture and environment for success, he said. This led to more success, higher graduation rates, college rates and grads finding great jobs.

How the team ended up on the big screen is a bit of a long story, Sheppard said. The team was invited down to the Baltimore World Cup in 2003 and the Baltimore Sun did a story about them. From there, ESPN did a profile and after many offers they decided to sign a life rights deal, which led to the movie being made.

He first saw it at the Toronto Film Festival with a couple of former students.

"It was obviously very emotional," Sheppard said. "Very surreal, but to me, when I watched it all put together  what I really understood was that there are many layers to what happened up there." 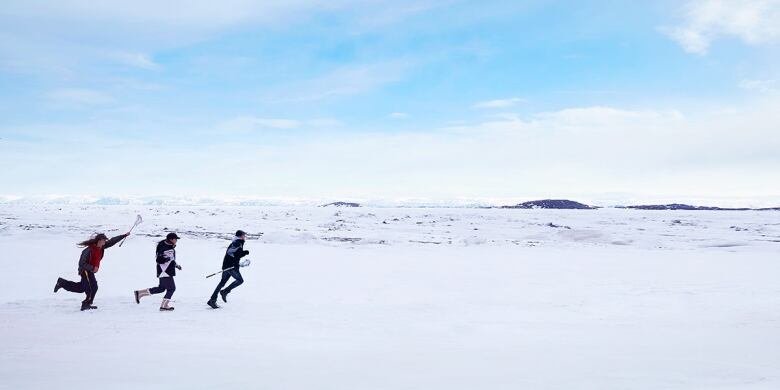 Sheppard said he hopes the story will be inspiration for teachers and students.

"It can be used for First Nations pushing forward for better education opportunities," he said.

Sheppard insists that he is not the focus of the story, nor the hero.

"It can't be trivialized to any type of hero," he said. "And, in fact, I feel like I learned a lot more from my students than I ever taught them."

Re: The The Grizzlies Movie - A Good News Nunavut Story