spaminator
#1 Feb 8th, 2019
Gucci's 'blackface' balaclava jumper pulled from stores after complaints
Associated Press
Published:
February 7, 2019
Updated:
February 7, 2019 9:36 AM EST
A screenshot taken on Thursday Feb. 7, 2019 from an online fashion outlet showing a Gucci turtleneck black wool balaclava sweater for sale, that they recently pulled from its online and physical stores. AP
ROME  Gucci has apologized after complaints that a wool sweater with an oversized collar designed to cover the face resembled blackface makeup, and said the item had been pulled from its online and physical stores.
It was the latest case of a fashion house having to apologize for cultural or racial insensitivity  and further evidence that Italy in particular has a wretched record with racial insensitivity staining everything from fashion to soccer to politics.
In a statement posted on Twitter on Wednesday, Gucci said it was committed to diversity and considered it a fundamental value to be fully upheld, respected and at the forefront of every decision we make.
The turtleneck black wool balaclava sweater, which sells for US$890 on one site, covers the nose and includes a red cut-out for the mouth. It was ridiculed on social media as insensitive and racist, at a time when the U.S. is grappling with cases of old photos of politicians with their faces blackened.
Gucci deeply apologizes for the offence caused by the wool balaclava jumper, Gucci said, adding that it intended to turn the incident into a powerful learning moment for the Gucci team and beyond.
Gucci, owned by French conglomerate Kering with an Italian design team, isnt alone.
In December, Italian designer Prada said it was no longer selling a line of accessories that featured a character with brown skin and exaggerated red lips after complaints they resembled blackface.
And last year, Dolce & Gabbana cancelled a Shanghai runway show and apologized after promotional videos seen as racist and subsequent insulting Instagram messages stoked a furor in one of the worlds largest markets for luxury goods. The ad campaign featured a Chinese model trying to eat pizza, spaghetti and a cannoli with chopsticks.
Non-Italian fashion brands have also been on the receiving end of complaints about insensitive products, behaviour or ad campaigns.
British designer John Galliano was removed as creative director at the French fashion house Dior in 2011 and later given a suspended sentence by a French court for having made an anti-Semitic and racist rant at a Paris bar. The designer apologized and said he had been under the influence of alcohol and prescription drugs at the time.
In 2014, the owner of Spanish retailer Zara recalled a childrens shirt that resembled the uniforms that Jews wore at Nazi concentration camps, with strips and a bright yellow six-pointed star recalling the Star of David. Owner Inditex said the shirt was designed to be part of a Wild West clothing theme and the star was intended as a sheriffs badge.
And last year, Swedish retailer H&M pulled an ad featuring a black child wearing a sweatshirt with the words Coolest monkey in the jungle. The campaign sparked celebrity protests and in South Africa, members of an opposition party stormed into some stores. The retailer apologized.
But most recently it has been Italian fashion houses that have been the target of celebrity and rank-and-file outrage  magnified by social media.
Racism is particularly acute in Italy, where taunts against black players are a regular occurrence at soccer matches and the countrys first black cabinet minister was subject to repeated insults by ordinary Italians and elected officials.
Just last month, a court in Bergamo, northern Italy, convicted a senator from the anti-migrant League party, Roberto Calderoli, of defamation with the aggravating element of racial hatred for having called the former minister, Cecile Kyenge, an orangutan. 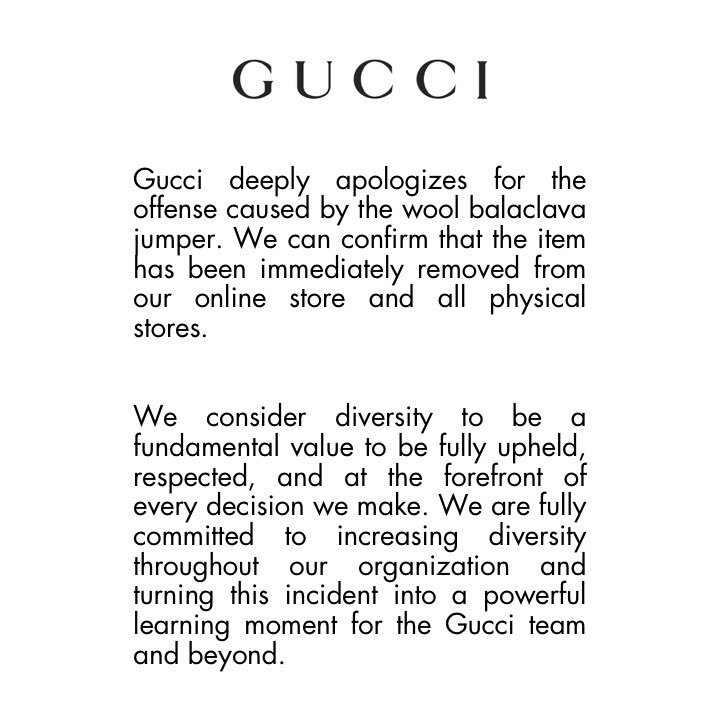 Feb 9th, 2019
Was this line of clothing inspired by The Fat Albert Gang?

Feb 9th, 2019
Gee, now we have to look at her naked white face. How antiblack can you get?

Well at least they are pro native.

Feb 13th, 2019
Gucci creative head: Balaclava jumper was inspired by performance artist Leigh Bowery not 'blackface'
Associated Press
Published:
February 12, 2019
Updated:
February 12, 2019 11:51 PM EST
British performance artist Leigh Bowery (L) is seen in this photograph taken by Fergus Greer in an exhibition at the NRW-Forum exhibition hall in Duesseldorf, western Germany in 2006. VOLKER HARTMANN / AFP / Getty Images
NEW YORK  Guccis creative director broke his silence Tuesday over an US$890 sweater that resembled blackface, saying racism was never his intention.
Alessandro Michele, a design force at the Italian fashion house, lamented in a letter to employees both his own pain and that of the people who saw in one of my creative projects an intolerable insult.
The black sweater with a pull-up neck featured a cutout surrounded by cartoonish red lips. Michele wrote that it was not inspired by blackface but by the late Leigh Bowery, a performance artist, club promoter and fashion designer who often used flamboyant face makeup and costumes.
A visitor looks at a photograph depicting British performance artist Leigh Bowery (L) taken by Fergus Greer in a 2006 exhibition at the NRW-Forum exhibition hall in Duesseldorf, western Germany. VOLKER HARTMANN / AFP / Getty Images
Regardless, Michelle said, he takes full accountability for the sweater, which was pulled last week amid widespread criticism.
Gucci has apologized, saying in a previous statement posted on Twitter that it was committed to diversity and considered it a fundamental value to be fully upheld, respected and at the forefront of every decision we make.
Story continues below
The balaclava-style sweater that covered the nose above the cutout was ridiculed on social media as insensitive and racist. It emerged as attention in the U.S. was focused on old photos showing politicians with their faces blackened.
A screenshot taken on Thursday Feb. 7, 2019 from an online fashion outlet showing a Gucci turtleneck black wool balaclava sweater for sale, that they recently pulled from its online and physical stores. AP
Other fashion brands have made similar missteps.
In December, Prada said it was no longer selling a line of accessories that featured a character with brown skin and exaggerated red lips after complaints they resembled blackface.
Micheles internal letter was reported by the site Fashionista.com and Womens Wear Daily.
Marco Bizzarri, Guccis president and CEO, told WWD, The lack of knowledge of diversity and the consequent understanding are not at the level we expected, despite all the efforts we did inside the company in the last four years.
The company is now evaluating all the processes to ensure the right level of awareness and visibility, he said.