$30K in wine and liquor on one trip alone.

What!? You delusional lunatic..

I want to tear my ears off every time Trudeau speaks.

I just hit the mute. He has nice hair.

Seriously?? What a fukking idiot you are.
It means the plastic will be used many times and then recycled back into straws and whatever. Lets hope your favorite straw is a recycled suppository holder.

You going to claim nobody owns his ass as much as he owns your Canadian bacon?

Its not bad for the environment when Trudeau does it, right? He gets a pass, right? 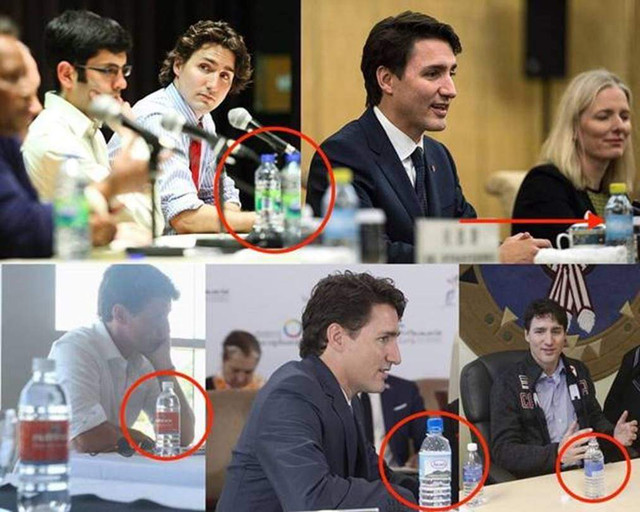 I suspect that with the exception of every manufacturer in China, nobody is against it provided we can find suitable, economical alternatives. What many people are against, however is a leader who has been revealed as a complete liar, a shameless, virtue signalling hypocrite, and a moron. The guy doesn't even have the sense to check with the nannies to see where his water comes from before stepping up to the podium and making a freaking fool of himself.

In other words Trudeau is the enemy therefore everything he says and does must be attacked.
You poor nattys.
What a miserable existence to have to be one of you

Why? You're just like them. You're a f*cking jingoist when it comes to Groper. He can do NO wrong in your eyes, even when he does shit like attempt to obstruct justice, sexual assault, engaging in multiple conflicts of interest, violating basic civil rights, etc. Meanwhile anyone who isn't pro-Groper is a White natty in your tiny little mind. You're pathetic. Go on, cry for us some more about how poor Groper has it so hard.
Oh by the way you little closet white natty, aren't there any non-White christians for you to cheer about the persecution of?
Man, what a miserable existence to have to be one of you. Always gotta remember what lies you told, living an ideology that is utterly hypocritical, having to decide which of your principles you won't be throwing under the bus on any given day, finding new and "exciting" forms of emotional and moral relativism, continually shifting goalposts to suit your agenda(s), And of course, insisting that anyone who won't join you in blowing Groper is a white natty.

#SpreadTheWord When it comes to protecting the environment, Trudeau just cant seem to practice what he preaches. 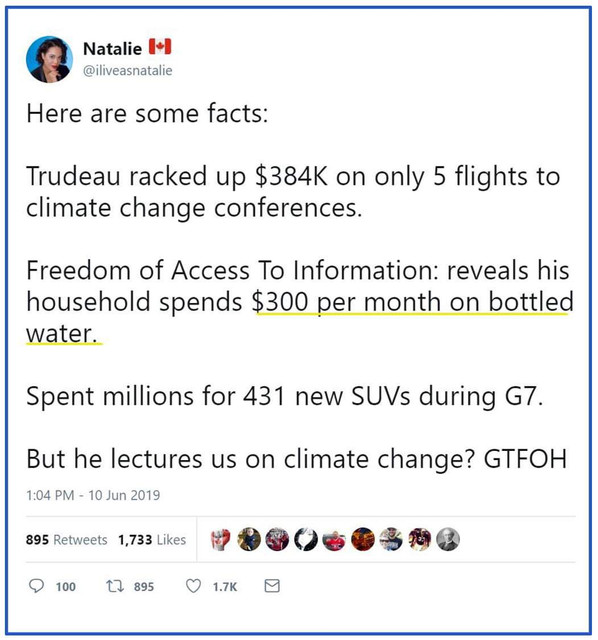 Trudeau can't seem to practice what he preaches when it comes to pretty much anything.

Well the trust fund boy is part of the Liberal Elite.. he's above the rest of us..

Jun 16th, 2019
GUEST COLUMN: Privileged PM Justin Trudeau mocked in viral video
Special to Toronto Sun
Published:
June 15, 2019
Updated:
June 15, 2019 11:06 PM EDT
During a recent environmental policy announcement, Prime Minister Justin Trudeau had difficulty explaining what his family is doing to reduce their use of plastic and his answer led to a viral video. (Twitter)
BY MICHELLE REMPEL
In the chateaus of downtown Ottawa, the morally superior bourgeois set often give each other knowing glances over glasses of wine served up on the lobbyist reception circuit.
Trudeau just connects with people better, you know? Especially young people and women.
Enter Sarah Fischer, a young, vibrant woman who happens to be the federal Tory candidate in Don Valley North.
To date, much of Sarahs social media posts have been what is expected of a political candidate. Pictures of her team out canvassing, her attending community events, the basic Im-working-hard sort of stuff one expects someone seeking public office to post.
Then, on a political issue that was highly relevant to the weeks news, the Sarah I know and love decided to bust out her wit to hilarious and epic effect.
Sarah put together a video that in nine seconds perfectly, and hilariously, encapsulated the virtue-signalling emptiness of Justin Trudeaus environmental record.
She was  and of course she was  resoundingly panned for it by the above mentioned chattering bourgeois reception-circuit class.
Her video has been watched over 500,000 times.
If you dont know what Im referring to, earlier in the week Trudeau attempted to make an environmental policy announcement. It was derailed after a reporter asked him a simple question: What is your family doing to reduce plastic use?
Evidently unprepared for such a basic question, he blathered out a cringeworthy and nonsensical response that ended with paper-water-bottle drink-box sort of things.
Trudeaus privilege has long been his weakness. He cant relate to the carbon tax hes forcing everyday Canadians to pay.
GOLDSTEIN: McKennas ludicrous promise on carbon pricing
BONOKOSKI: Scheers great climate plan unveil to get mid-week spotlight
And last week, in asking Canadians to stop using plastic, and being unable to tell them how he was doing so, he reinforced the perception of being the dilettante PM who tells Canadians to do as he says, but not as he does.
Sarahs video, which brilliantly mocks Trudeaus response, put this all together in nine seconds. It responded to a newsy political issue in the moment with comic effect. It was satire and political commentary meshed together. It was magic.
Heres the thing  the days of written op-eds like this are quickly passing. There is an entire generation of people who express creative dissent with Instagram memes and Facebook posts.
Why is it that Liberals, like Justin Trudeau, who have often been praised and given front-page billing for doing accessible things like kayaking shirtless, are lauded for these efforts but Sarah was derided?
I have a theory.
Old school opinion writers, like Susan Delacourt of the Toronto Star, who was one of the criticizers-in-chief of this matter, are seeing their platforms eroded by content creators who have their pulse on a market of people who were born consuming information on a digital platform.
But Sarah, a young  gasp!  Conservative woman, did so with wit and ease.
There are dozens of Conservative candidates who break the mould set by the Ottawa chattering class for Conservatives: tattoo artists, First Nations women, women of colour, candidates with youth, wit, and vigour who embrace digital media and independent content creation.
Our country is better for it.
Keep it up, Sarah.
Michelle Rempel is the Conservative member of Parliament for Calgary Nose Hill and shadow minister for citizenship and immigration
http://twitter.com/i/videos/tweet/1138112029309440001
http://twitter.com/i/videos/tweet/1138979368993206273
http://torontosun.com/opinion/column...in-viral-video

Jun 16th, 2019
Still not sure what is wrong with trying to get rid of single use plastics.

Pretty sure just about everybody supports the basic principle of reduction.
Last edited by Hoid; Jun 16th, 2019 at 10:32 AM..

I want to tear my ears off every time Trudeau speaks.

Don't do that! Your snugglebunny needs something to hang on to. Y'know, for guidance purposes.

Don't do that! Your snugglebunny needs something to hang on to. Y'know, for guidance purposes.


One night a couple was sitting on the couch talking when they heard a terrible noise outside. They ran out to see what it was. When they got there they were shocked to see that and alien spaceship had landed in their backyard. The aliens said, "Don't worry we come in peace. We just want to talk."

So the couple and the aliens sit down to talk. After awhile they start to get tired to they decide to go to bed. The alien couple said, "Look we've never had sex with a human and we know you've never had sex with an alien so how about we switch places for the night." The human couple agreed. The human woman and the male alien began messing around in a bedroom.

When the alien man pulled out his dick the woman complained that it was too small, so he said, "Oh thats no problem look." He hit himself in the forehead and it grew 1 inch.

"Yeah" he replied "just keep doing that until it is the size you want it."

Well after awhile she got it where she wanted it and then complained that it was too small around. so he said' "Well watch this" And pulled his ears. It got bigger around. "just keep doing that until its the size you want it." After that they started having sex.

The next morning after the aliens left the human couple were talking and the male asks, "So how was it?" She replied'

"It was the best thing that has ever happened to me. What about you?"

"The bitch kept hitting me and pulling my ears!"