Blackleaf
#1 Feb 23rd, 2019
For hundreds of years carvings of naked women have sat provocatively on churches across Britain. But who created them - and why? 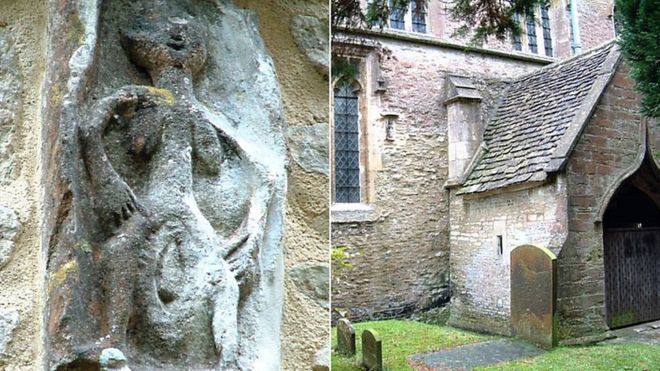 For hundreds of years carvings of naked women have sat provocatively on churches across Britain. But who created them - and why?

The year is 1992 and the singer-songwriter PJ Harvey is performing Sheela-Na-Gig, the most successful single from her critically acclaimed album Dry.

But unless you're a fan of late 20th Century indie music, or an expert in Norman church architecture, there's every chance you've not been exposed to the sheela-na-gig - or have walked past one without even realising it.

Hidden in plain sight, these sculptures of squatting women pulling back their labia have for nearly a millennium sparked intrigue, shame and even anger.

Often overlooked, or perhaps ignored, by vicars and congregations, the figures can be seen in dozens of British churches. 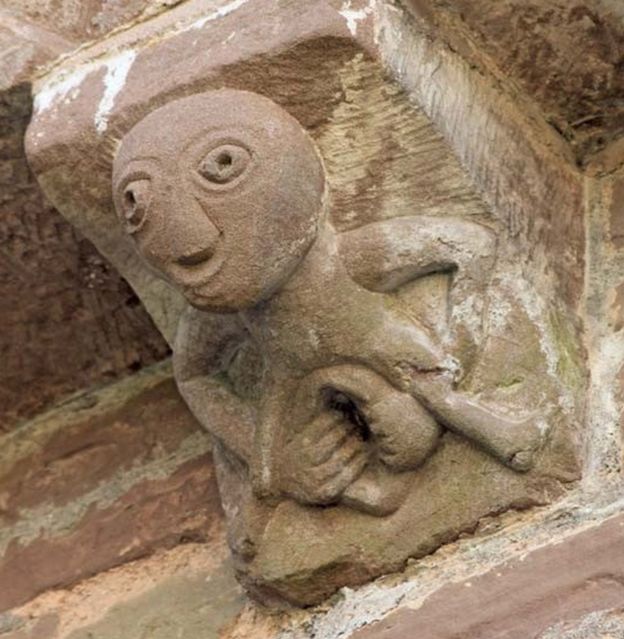 The UK's "poster girl for sheela-na-gigs" can be found at the Church of St Mary and St David in Kilpeck, Herefordshire

For the past 20 years John Harding, from the Sheela Na Gig Project, has covered thousands of miles tracking down sightings of them across the country.

His obsession began following a visit to a church in Shropshire in 1998.

After finding very little information online, he decided to post something himself and was inundated with possible sightings.
"They are not quite as rare as the yeti but they're not common," he says.

"You get pockets of them. In Shropshire they are all within about 10 miles of each other and they're all different - but they're all naked women, basically."

Ireland has the largest concentration of sheela-na-gigs, while in the UK there are about 60 known figures with "more popping up all the time", according to Mr Harding.

"Sheela is the Irish form of the Norman name Cecile, and 'gig' is actually English slang and it means a woman's bits," he explains. 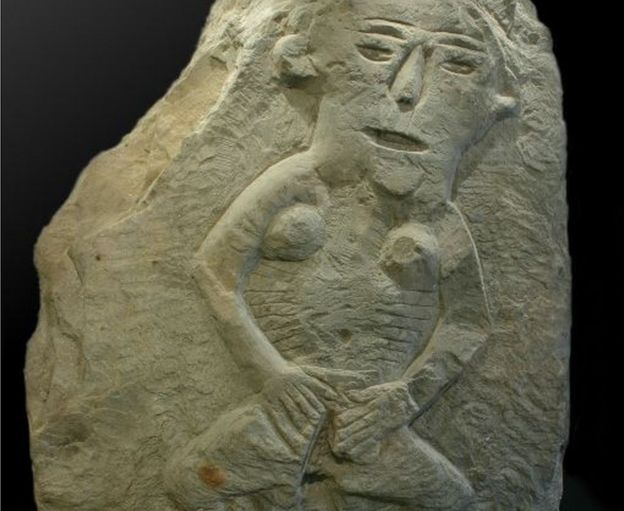 But why these stone carvings were displayed in Norman churches across Britain, Ireland, France and Spain has divided opinion.

Some suggest the figures depict a pre-Christian deity, others that they are a fertility symbol or a protection against evil.

Dr Barbara Freitag, author of Sheela-na-gigs: Unravelling an Enigma, believes they were made by local carvers for country churches to promote a successful birth.

"Generally sheelas are carved in the birthing position and are presented with their vulva in the desired physiological state before, during or after birth," she says.

"The emaciated upper half of these figures was meant to appease the dead mothers or grandmothers who were thought to bear a grudge against the newborn." 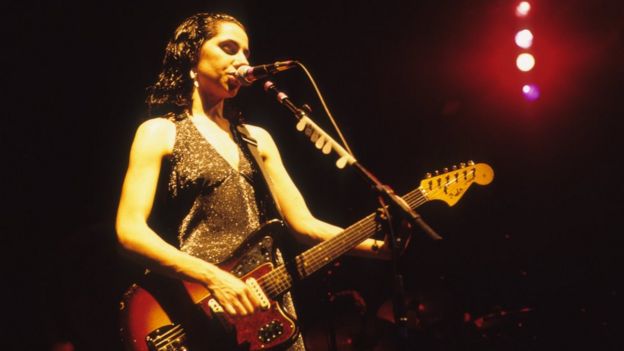 For Georgia Rhoades, author of Decoding the Sheela-na-gig, the "nude and bald" women represent the Crone or Earth Goddess.

"They were pagan goddess figures, emblematic of the Earth Goddess who births us and takes us back into her at death," she explains.

"In some places, brides were required to look at and perhaps touch the sheela before weddings, which seems to suggest their role in fertility rites."

Mr Harding, however, thinks the explicit church sculptures were meant to warn people against the sin of lust.

"Sheelas in this country are cartoonish and not very attractive generally, but in Ireland some are downright monstrous and scare the willies out of you."

He adds: "There's one in Haverfordwest [in Pembrokeshire] in the cloisters, holding its dress up.

"The only people who would have seen it would have been clerics and monks, so it's obviously to do with sin." 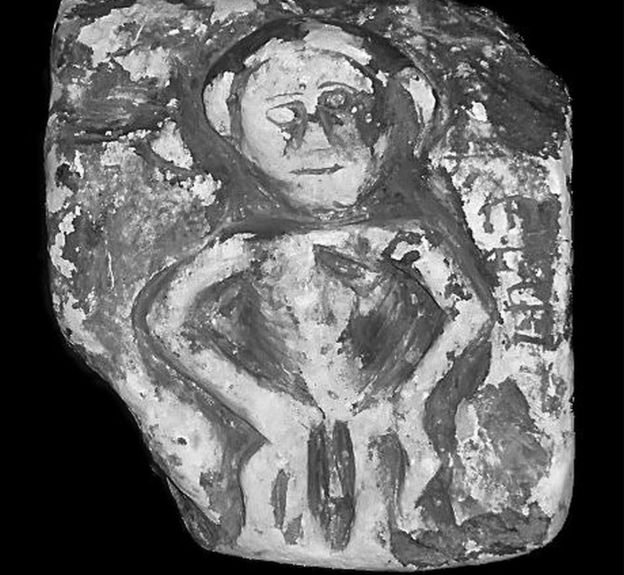 The sheela at St Mary's in Easthorpe, Colchester, was deemed too obscene to remain at the church and was given to a museum

In the UK the "poster girl for sheela-na-gigs" can be found on Kilpeck Church near Hereford, according to Mr Harding.

However, it is the sheela at the parish church in the Wiltshire village of Oaksey, with her "pendulous breasts" and "hugely exaggerated vulva", which is his favourite.

"When you see the Oaksey sheela, most people's reaction is 'good God'," he says.

"It's the most kind of in-your-face and it's the breasts as well - the Kilpeck sheela just has nipples, but here you've got all the womanly attributes."

Positioned next to the main door of the church, a small lead roof has been installed above the carving to protect it. 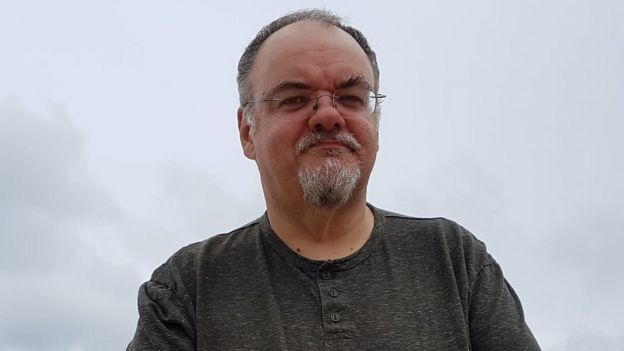 Since starting the Sheela Na Gig Project as a hobby, John Harding has become so knowledgeable he was invited by Encyclopaedia Britannica to write the entry

But not all congregations have been keen to embrace these X-rated sculptures.

In the Essex village of Easthorpe, a sheela was deemed too obscene to keep and so was given to a museum after serving time in the vicarage garden rockery.

Some have been found in rivers with "marks of burning on them", Mr Harding says, while others were removed, hidden or destroyed by red-faced clergyman and shocked churchgoers.

In 2004, a topless figure which had been in a chapel in Buncton in West Sussex since the early 1100s was attacked, despite having "no obvious genitals on display".

"It wasn't a very well known one. It was an inoffensive thing," says Mr Harding.

"I put it up on the website and somebody went in at night and chiselled it off the wall." 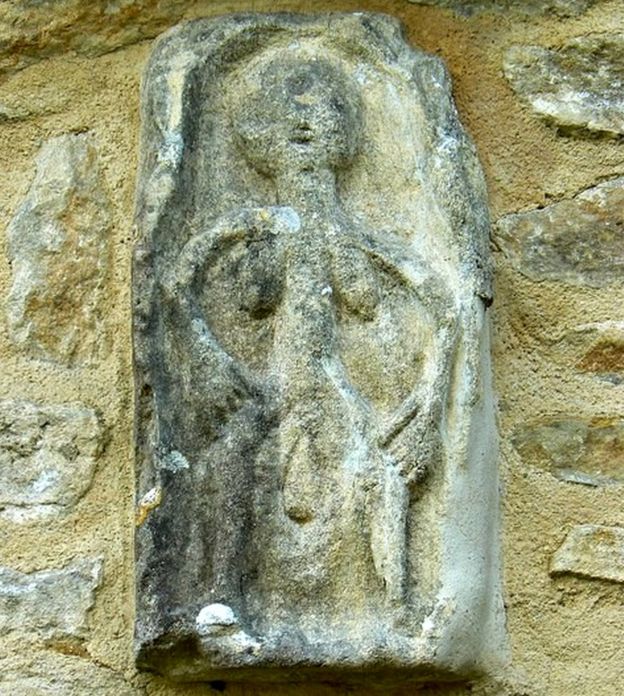 A common reaction to seeing the sheela-na-gig at Oaksey in Wiltshire is "good God", according to Mr Harding

And it's not just the full-frontal brashness of the sheela that has outraged sensibilities.

Phallic figures found on the corbels [wall brackets] in churches are thought to have come under attack by the Victorians.

"In Kilpeck there are a number of corbels missing, and there's a story that an old chap said he was ordered by the vicar's wife to chop some of the corbels off," Mr Harding says.

A male in a "state of arousal" can even be found alongside a female figure at one Wiltshire church, as Mr Harding explains.

At the church of St Mary and St Andrew in Cambridgeshire, a sheela can be seen next to a naked male figure.

"You've got this animalistic man with this massive erection and this sheela na gig which is quite plump and fecund with her legs held apart and he's crawling towards her," he says. 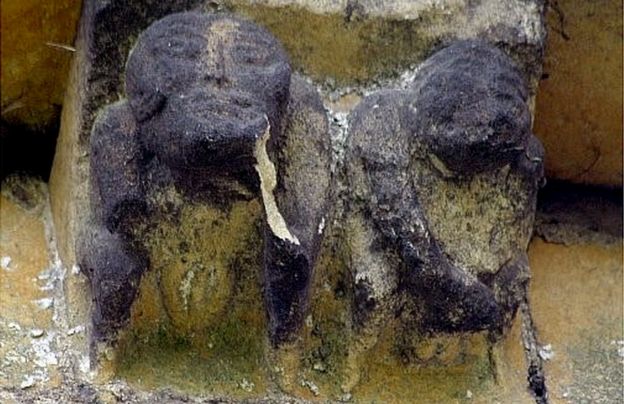 This pair, she with a "clearly visible" vulva and he clutching his damaged penis, were discovered at the church of St John in Devizes in 2006

In the roof of Avening Church in Gloucestershire an "acrobatic type" can be seen with his head between his legs and a penis in his mouth In Bristol, graphic artwork can be spotted in the 1,200 roof bosses [carved decorations] at St Mary Redcliffe.

Among a number of exhibitionist figures there is a contortionist "showing their bottom with all their other bits", a naked couple, and a man with "his trousers down - having a poo".

And if that wasn't enough to make a choirmaster blush, high in the roof beams of Avening Church in Gloucestershire an "acrobatic type" can be seen jutting out from the wall with his head between his legs and a penis in his mouth.

"Sometimes they're playing instruments and it looks very suggestive, but in Avening Church if it is bagpipes, he's not holding it. So it's fairly self-supporting, shall we say."

For the Church of England, the presence of stone genitalia in places of worship is all part of the "rich tradition of church decoration" over the centuries. 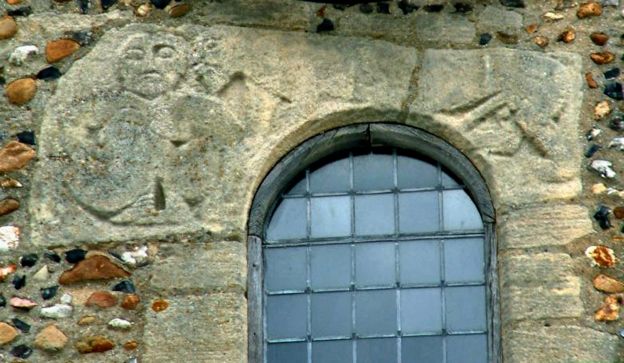 A sheela can be seen next to a naked male figure in Whittlesford, Cambridgeshire

"As with other gargoyles and grotesques, it is sometimes surprising to modern eyes to encounter them in a religious context," a spokesman says.

"But they reflect the diversity of architectural ornament found on churches up and down the country."

And even though the experts might not think alike as to what purpose sheela-na-gigs served, many do agree on one thing.

"In this country a lot of them seem to be smiling and are quite cheerful-looking," says Mr Harding.

Ms Rhoades agrees that many sheelas "are clearly enjoying themselves".

"My favourite is at Oaksey, where the sheela's vulva is extended almost to her ankles," she says.

"We don't know exactly what her message is, but she's joyous and it's clear where the message is coming from."