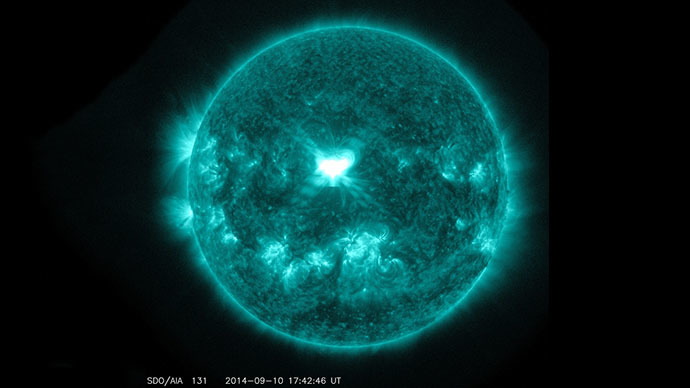 A powerful solar flare sparked on an Earth-facing section of the sun. A subsequent coronal mass ejection is expected to reach our planet later in the week, possibly causing disruptions of communication and power grids.

The flare was unleashed by the sun on Wednesday and was estimated at X1.6, putting it in the strongest extreme class of solar flares. It was launched from a sunspot called Active Region 2158 and was caught on camera by NASAs Solar Dynamics Observatory spacecraft, reports Space.com. The same region produced a smaller flare a day before that.

The flare was accompanied by the release of superhot plasma, a coronal mass ejection, with the cloud expected to reach Earth later on Friday. Luckily, most of it is expected to pass north of Earth, causing a relatively week solar storm. Power grids may experience some fluctuations, as the plasma would affect the planetary magnetic field, but it poses little danger either to anyone down here or to crew members of the International Space Station.

"We're not scared of this one," Tom Berger, director of the Space Weather Prediction Center in Boulder, Colorado told AP.

On the bonus side, the space weather events may trigger colorful aurora borealis in regions usually too far from the North Pole to produce them, which is good news for enthusiasts.

The frequency and intensity of solar flares depends on the phase of the 11-year solar cycle. The sun is currently close to the peak of Cycle 24. But our star was relatively quiet this cycle, with the maximum phase measured in the weakest in about 100 years.

The Wednesday flare was strong, but far from being the strongest this year. In February a monster flare was measured at X4.9. The absolute record in solar flare recorded was an X28 in November 2003, while the Carrington Super Flare of 1859, which fired telegraph systems at the time and would cause catastrophic damage if it happened in modern times, is estimated at well over X40.

It will be interesting to see if effects satellite communications of electrical grid?


Old news, storm passed and missed us 2 months ago.


Old news, storm passed and missed us 2 months ago.

LOL seems I missed that.. FFS

Nov 7th, 2014
I had an extreme ejection wednesday...had to breathe through my mouth for 48 hours it was that ripe.