Remainers are losing their heads over the suspension of Parliament, like Charles I

Blackleaf
#1 Aug 28th, 2019
Suspending Parliament didn't end well for Charles I when he did it, albeit in very different circumstances, 370 years ago...


Let's not lose our heads: King Charles I's suspension of Parliament serves as a reminder to today's leaders of the dangers posed by unruly politicians and of standing in the way of MPs

Suspending Parliament didn't end well for King Charles I, 370 years ago
Like Boris Johnson, the king felt he had no choice in build up to English Civil War
Today, Charles' second over-shirt is framed in Royal Collection at Windsor Castle
Indeed, history tells us the potential dangers of an unruly Parliament and also of stopping MPs conducting their business 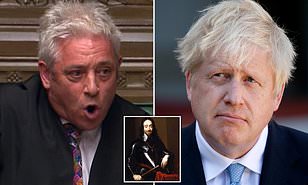 Suspending Parliament didn't end well for Charles I when he did it, albeit in very different circumstances, 370 years ago.

His prorogation from 1628-29 was the first of many attempts to muzzle MPs in the build-up to the English Civil War and resulted him in being beheaded in 1649.

Like Boris Johnson, the king felt he had no choice, being confronted by 'some fewe cunning and ill affected men' in the Commons who were plotting against him.

But those 'cunning and ill affected men' won the day.

On January 30, 1649, Charles was led to the scaffold by the Banqueting House in Whitehall. Wearing a white nightcap, he made a short speech and concluded by saying: 'I go from a corruptible, to an incorruptible Crown; where no disturbance can be, no disturbance in the world.'

He then asked his executioner: 'Is my hair well?' and took off his cloak, doublet and waistcoat.

After saying two or three words to himself, Charles laid his neck on the block and the executioner severed his head from his body with one clean blow.

The king had paid the price of losing a battle which began when he tried to get the approval of Parliament to raise new taxes after a series of ill-advised military escapades.

But MPs, in turn, were fed up with Charles's demands and got him to accept a Petition of Right in return which was intended to limit his powers.

However, Charles duped MPs by taking the money but he prorogued Parliament in June 1628, stopping it from sitting.

This prorogation lasted for seven months before Charles reopened Parliament in January 1629. But relations between him and Parliament worsened as he continued to try to stop it working as normal.

In March 1629, he ordered an adjournment but MPs refused to accept it. Two MPs held the Speaker in his chair in order to keep Parliament sitting.

Outraged, Charles dissolved Parliament and for the next 11 years it didn't sit - with the king ruling unchecked.

By 1640 when he resummoned Parliament, his authority had drained away.

That session - named the Short Parliament - lasted only three weeks before it was dissolved by the king for several months.

This new Long Parliament lasted for 20 years but tensions swiftly exploded into the Civil War.

Eventually defeated, Charles was beheaded on that freezing January day in 1649.

He wore two shirts to stop him shaking from the cold and because he didn't want the crowd to think he was scared.

Today, his second over-shirt is framed in the Royal Collection at Windsor Castle.

It is said that the Queen is fond of showing it to visitors and telling them the story of Charles I's execution.

Indeed, history tells us the potential dangers of an unruly Parliament and also of stopping MPs conducting their business.