... and Boomer knows all about little dicks.

Sep 20th, 2019
Boomer seems to be the only one that cares about dick size. One has to wonder why.

Boomer seems to be the only one that cares about dick size. One has to wonder why.

He's not up to "bigger" matters.

Sep 21st, 2019
'HE'S DRESSED AS ALADDIN DOING BLACKFACE': Late-night talk show hosts take shots at Trudeau
Canadian Press
Published:
September 20, 2019
Updated:
September 20, 2019 9:23 AM EDT
Trevor Noah talks about Justin Trudeau's blackface scandal on "The Daily Show."YouTube video screenshot
Liberal Leader Justin Trudeau got the wrong kind of international attention Thursday as late-night talk show hosts south of the border took jabs at him for dressing in blackface when he was younger.
As part of his opening segment, The Daily Show host Trevor Noah said the reason Trudeau has been popular in the U.S. is because hes been a womens rights and environmental advocate, and he has connected with minority communities.
But now we are learning that he may have connected with minority communities a little too much, Noah joked.
A black-and-white photo from a 2001 yearbook shows Trudeau at an Arabian Nights-themed gala event at a Vancouver private school where he once taught.
In the photo, published Wednesday by Time magazine, Trudeau is clad in a turban and robe with his face, hands and neck covered in dark makeup.
Justin Trudeau appeared in brownface in a 2001 yearbook photo from the private school where he taught.
Trudeau, who is seeking re-election as prime minister, apologized profusely afterwards, calling the action racist, although he said he wasnt aware it was racist at the time.
Noah, a South African comedian, joked, if you are going to darken your skin, at least get the colour right.
Trudeau isnt dressed as Aladdin, hes dressed as Aladdin doing blackface, Noah said.
He went on to say Trudeau didnt need the blackface to make the costume work at the event.
No one is going to see him and be like, Oh, white skin, are you the snowman from Frozen?
Trudeau has also admitted to wearing blackface in a high school performance where he sang Harry Belafontes Banana Boat Song (Day O).
Thursday morning, Global News published a short video of a young Trudeau again in blackface, sticking out his tongue for the camera and raising his arms over his head. The Liberals said that video was from the early 1990s, putting him in his early 20s.
The Liberal leader was also mentioned on the Conan talk show Thursday night.
A big scandal up in Canada, host Conan OBrien said as some audience members cheered.
I know you are Canadian, but this is not good news for you, he said to them. Canadians are just so happy to be mentioned.
Unlike some of the others, Late Night with Seth Meyers didnt show Trudeaus blackface photo.
From tonights #LNSM: Justin Trudeaus brownface scandal could have consequences. pic.twitter.com/gcPjRn7evA
 Late Night with Seth Meyers (@LateNightSeth) September 20, 2019
The photo is so bad that Canadians travelling in Europe are going to start telling people theyre American, host Seth Meyers said.
Meanwhile, Stephen Colbert also used his opening segment on The Late Show to mention the controversy.
A photo has emerged of Trudeau wearing brownface at a party. This is pretty bad, Colbert said.
And I just want to say  its not us this time. Suck it, Canada!
Justin Trudeau says he didnt realize at time blackface was hurtful
Political rivals react to racist Trudeau blackface images
KINSELLA: Trudeau traded in the foulest racist stereotypes
BONOKOSKI: Ballot box question is Does Trudeau deserve second term?
Mad Max Bernier blasts Trudeau as hypocrite in light of blackface scandal
http://youtube.com/watch?v=5iqx12IUHxE
http://youtube.com/watch?v=2PFB63eFbGM
http://twitter.com/i/videos/tweet/1174835564857741312 http://torontosun.com/news/national/...ckface-scandal

Oct 11th, 2019
Grit candidate apologizes for defending Trudeau blackface pics
Aidan Wallace
Published:
October 9, 2019
Updated:
October 9, 2019 4:59 PM EDT
Judy Sgro, Liberal candidate for the Toronto riding of Humber River-Black Creek.Facebook
Another member of Team Trudeau is in hot water over the blackface controversy.
In a Sept. 28 radio interview posted to Twitter on Wednesday, Judy Sgro, federal Liberal candidate for Humber River-Black Creek, defended Justin Trudeaus blackface photos.
Sgro said the scandal happened 20 years ago and the black community have told her they love Trudeau more because he wanted to have a black face.
The longtime MP seemed to diminish the controversy in the interview with online station GBKM FM when asked what she had heard about the scandal while campaigning.
lmao Judy Sgro (L  Humber River-Black Creek) says her Black constituents love Justin Trudeau even more because he took pride in the effort to have a black face I am finishedddddd#cdnpoli pic.twitter.com/A4Qce5v2Cz
 Spooky Rexdale Mans (@andraydomise) October 9, 2019
All of us were young at one time and all of us sometimes made poor choices and did things that may not be appropriate in todays world, Sgro said.
Sgro continued: Those in the black community have told me how much more love they have for the prime minister, that he wanted to have a black face, he took great pride in that too.
They (the black community) are very supportive and they are actually looking for finding more ways that they can show how much they support and love the prime minister.
Another photo of Justin Trudeau at West Point Grey Academys 2001 Arabian Nights gala published in the schools ViewPoints newsletter that April.
Sgro also blamed the media for blowing the scandal out of proportion.
Its the media that have blown this into something that it shouldnt be, she said.
Sgro, a public servant with a record spanning more than 30 years, has been a member of Parliament since 1999.
Hours after the clip was posted, Sgro responded to the severe backlash she received online, which included many Twitter users calling for her resignation.
Liberal candidate apologizes for past racist, homophobic and sexist social media posts
KINSELLA: Blackface photo shows why it's time to cancel the Trudeau show
EDITORIAL: Trudeau needs to blame himself, not the rest of us
The comments I made on GBKM FM were insensitive. I should have known better, and I apologize, the two-time Macleans magazine Best Mentor award winner said in a statement.
The history of blackface is deeply racist and it is nothing other than discriminatory. This issue has sparked an important conversation in our country and needs to be treated with great seriousness and sensitivity.
pic.twitter.com/M0UjRKXnqJ
 Judy Sgro (@JudySgroMP) October 9, 2019
The statement ended: I will continue to have these important conversations with my constituents.
The Toronto Sun reached out to Sgro for comment but did not immediately receive a response.
One Twitter user replied to her apology tweet with You misspelled I resign, while another wrote: Gross, defending racism is gross.
 With files from the Canadian Press 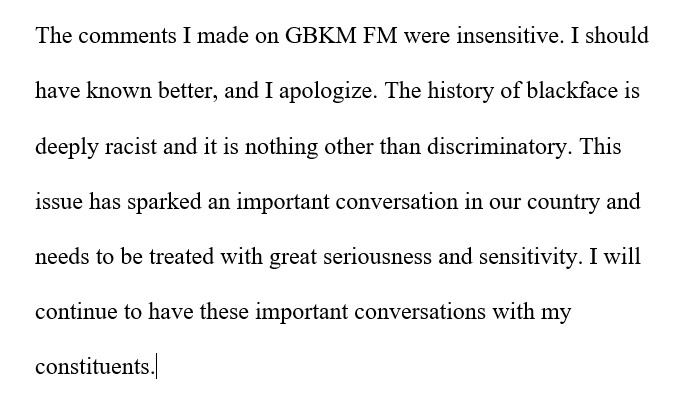 Just like a Klansman go to is a hood.
Let's see how many racists vote for him.

That's funny considering who all lives in the "hood" these days.

or for all those cultural appropriaters who wear hoodies.