spaminator
#1 Aug 12th, 2019
Versace apologizes after T-shirt triggers fierce criticism in China
Reuters
Published:
August 11, 2019
Updated:
August 11, 2019 12:04 PM EDT
Donatella Versace walks down the catwalk after her Versace presentation in New York City on Dec. 2, 2018.Allison Joyce / Reuters / Files
HONG KONG  Italian luxury label Versace and its artistic director Donatella Versace apologized on Sunday after one of the companys T-shirts was widely criticized on social media in China for identifying the Chinese-controlled territories of Hong Kong and Macau as countries.
Versace, which was bought by Michael Kors Capri Holdings Ltd in September, said on its Twitter-like Weibo account that it had made a mistake and as of July 24 had stopped selling and destroyed the T-shirts.
Milan-based Versace is the latest company to become entangled in political issues involving China, which since last year has increased its policing of how foreign firms describe Hong Kong and Macau, former European colonies that are now part of China but run with a high degree of autonomy.
Versace reiterates that we love China deeply, and resolutely respect Chinas territory and national sovereignty, the company said in a statement.
The T-shirt, images of which were widely posted on Chinese social media, featured a list of city-country pairs, including New York-USA and Beijing-China. But it also described Hong Kong and Macau as Hong Kong-Hong Kong and Macau-Macau.
Donatella Versace, sister of the fashion houses late founder Gianni, issued a similar statement on her official Instagram account.
Never have I wanted to disrespect Chinas National Sovereignty and this is why I wanted to personally apologize for such inaccuracy and for any distress that it might have caused, she said.
The studio of Versaces China brand ambassador Yang Mi, one of the countrys most well-known actresses, also said on its Weibo account that she was ending her contract with Versace over the issue.
Chinas territorial integrity and sovereignty are sacred and inviolable at all times, Jiaxing Media said in the statement.
The ending of Yangs relationship with Versace was one of the most viewed topics on Weibo on Sunday, attracting over 640 million views. 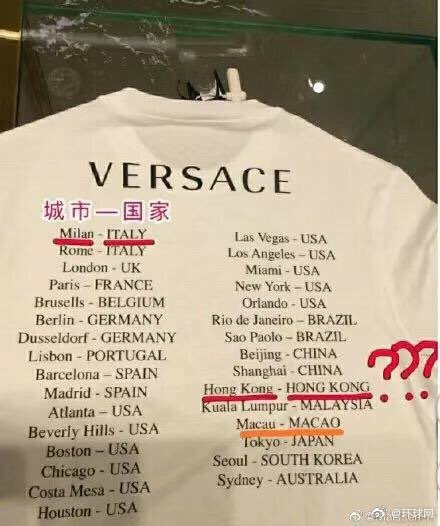 Translation: We love the massive Chinese market deeply, and resolutely kiss their collective ass in apology in the hopes of not having just slit our throats in China.

Say, has anybody seen tankboy around anywhere lately?