Sep 20th, 2017
Expanded security checks all part of modern-era Maple Leafs experience
By Joe Warmington, Toronto Sun
First posted: Tuesday, September 19, 2017 09:18 PM EDT | Updated: Tuesday, September 19, 2017 09:28 PM EDT
Man, theres nothing like that first whiff of the ice and the promise of a new Maple Leafs season to put a smile on a Torontonians face.
Once you get through the bomb dogs, airport-style metal detectors and security officers conducting bag checks, that is.
Welcome to an NHL game in 2017.
When I got down to the first pre-season game against the Ottawa Senators on Tuesday night, I noticed crazy lineups  not only one to get into the game, but a second one, as well.
Oh, thats for the new bag check policy, said Jess Schmalz.
She and her pal, Elli Deboer, came in from Hamilton and found themselves turned away from the boarding area at Gate 1 toward a secondary area for checks of backpacks and bags.
That lineup was even longer than the area at the main gates that look like you are boarding an airplane.
Its OK, said Schmalz. Id rather be safe than sorry.
I guess.
But my feeling is it went a little too far.
I was sitting with my pal, George Bigliardi, and right behind us were Sabrina and Saajid Bhayat, who come to a few Leafs games each year  never with an issue. Until now.
Seems that a security guy wouldnt let Sabrina in unless she turned over tiny nail clippers with little scissors attached. They were discovered by security personnel during a purse check.
He said, It goes in the garbage or you dont go in, said Sabrina. I was pretty surprised but I wasnt going to clip my nails at the game anyway.
Its only preseason but its still nail-biting time, joked Saajid.
I was kind of embarrassed this women faced this sort of security, but she was a good sport about it.
Its just the reality of going to a hockey game in Toronto now. Sad that going down to a Maple Leafs game at the Air Canada Centre reminds me of when I was trying to get into ISAF headquarters in Kabul.
Thanks, terrorists.
The only saving grace for the law-abiding fans was none other than Air Canada Centre security man Angus Collis, who was really funny on the mega-phone and even showed off some dance moves. Keeping it light. Keeping it fun.
Speaking of fun, everything was back to normal once we all got inside. Carlton the Bear was in fine form and people really enjoyed seeing new Leafs forward Patrick Marleau score his first goal in the blue and white  a beauty.
This is what Toronto is all about.
We are so happy to be here, said Russ Cooray, who was with his eight-year-old daughter, Helena. This is a big thrill for both of us.
It was Helenas first Leafs game.
I am so excited, she said. I just love these guys.
She plays centre for her team in Aurora and cant wait to tell her friends about being at the game.
For her, its the speed and artistry on the ice  and the taste of the ice cream and popcorn.
She didnt mention the security wanding, dogs or the bag check as part of the experience.
But they were all part of it, too.
Expanded security checks all part of modern-era Maple Leafs experience | WARMING

Sep 21st, 2017
Maple Leafs' Lupul apologizes for 'unneeded distraction', won't be seeking second opinion
By Terry Koshan, Toronto Sun
First posted: Wednesday, September 20, 2017 08:52 PM EDT | Updated: Wednesday, September 20, 2017 08:58 PM EDT
Joffrey Lupul has taken the high road and apologized.
The Maple Leafs forward  at least on paper  took to social media on Wednesday to address comments he made earlier this week on Instagram.
Several days ago, Lupul called out the Leafs, taking issue with general manager Lou Lamoriellos assertion that Lupul had failed his physical on the first day of training camp.
Responding to a fan, Lupul said Haha failed physical? They (the Leafs) cheat, everyone lets them.
He added that he was ready and just awaiting a call.
Lupuls frustration with not having played since Feb. 6, 2016  he had sports hernia surgery not long after  boiled over. He has one year remaining on his contract, which represents a $5.25-million US cap hit for the Leafs this season.
On Wednesday, Lupul, who turns 34 on Saturday, addressed on Twitter his posts from earlier this week, which he had deleted. The tweet was his first since June 2016.
I responded earlier this week to some negative comments on Instagram, Lupul wrote. It was an inappropriate response, and I deleted it, but I take full responsibility. Its been extremely tough not being able to play over the past 1.5 years. I will not be seeking a second opinion, but I hope one day to be able to get back on the ice. I apologize to the media, fans, Leafs organization, and most of all my teammates for this unneeded distraction. 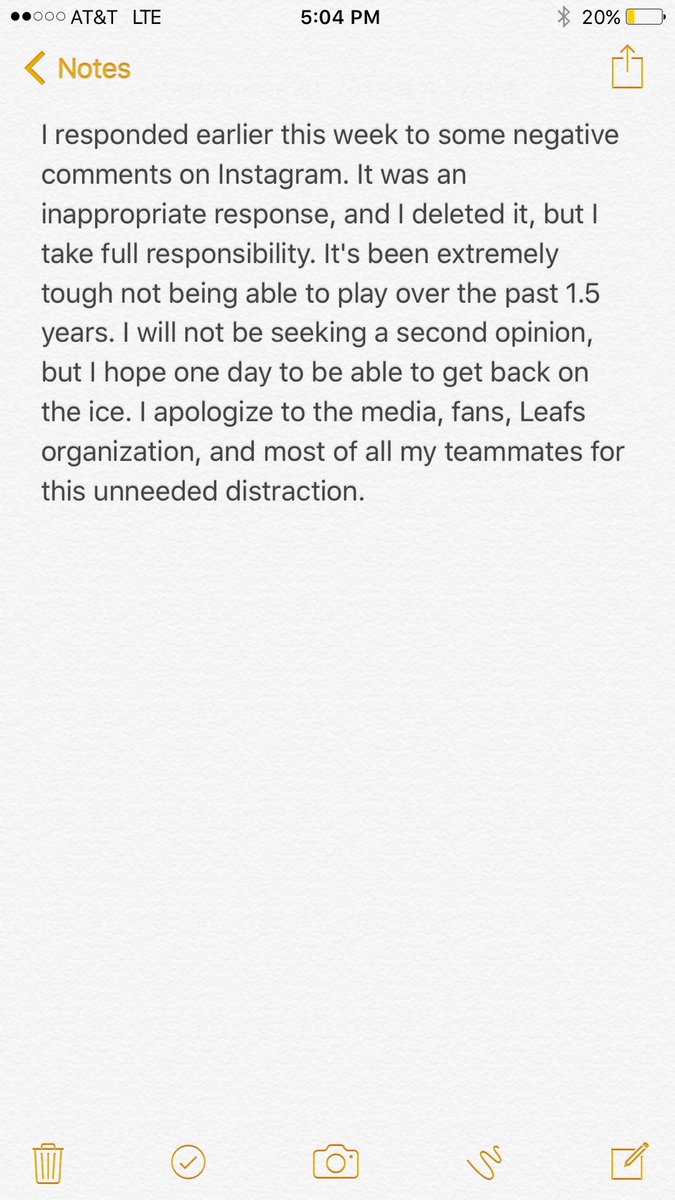