talloola
No Party Affiliation
#1 Mar 21st, 2008
This is one of the biggest blunders in u.s. history, by probably the worst president the
u.s. has ever elected.
Many awful and sad events have taken place in Iraq in the past 5 years, BUT my most vivid
memory is , president bush standing on the aircraft carrier telling all of us in the world
that, there has been victory in Iraq and the war is over.
That, in my opinion, was the 'biggest fool in u.s. history make the biggest fool of himself
in u.s. history'. I feel embarrassed every time I visualize that scene.

Mar 21st, 2008
Did you see Dubya on tv the other day? He had a twinkle in his eye and smirk on his face as he talked about Iraq. I don't think he really has any idea what is going on or what he has done.

Did you see Dubya on tv the other day? He had a twinkle in his eye and smirk on his face as he talked about Iraq. I don't think he really has any idea what is going on or what he has done.

I agree, he got himself in so deep, and he'll find that all his cronies who goaded him into
this to begin with, will desert him, and he will be left sucking his thumb, and flapping
his ear, the same as he did when he was 2 years old.
He didn't have a clue, everytime cheney and friends told him what to say in his speeches,
he just said, 'yeah yeah that's a good one, lets tell them that", and on the story goes.
His mom and dad should come to the white house, give him his old soother, and take him
by the hand, and go home, so he can go to his room and play.

Mar 21st, 2008
And does anyone believe for a moment that the people of America will acknowledge their culpability and hold their government accountable?

Did you see Dubya on tv the other day? He had a twinkle in his eye and smirk on his face as he talked about Iraq. I don't think he really has any idea what is going on or what he has done.

I didn't see him, but I have suspected for some years already that Mr. Bush is well aware of his role playing, that's why they put him in the front row to soothe, distract and mainly humor the public. He carries no real responsibility and knows it. The real wire pullers keep a low profile in the back of the stage... the most ambitious and serious one being Dick Cheney.
That's my humble opinion this morning!

Maybe a contractor in Washington has access to more black stone and has "won" a contract with the Whitehouse to erect another wall of "honor"....

Wouldn't it be nice if Americans had spines?

Mar 21st, 2008
"Shock and awe". Strange thing to be calling what was supposed to be a "liberation". What it really was, was a lynch mob that killed close to a million people.

And does anyone believe for a moment that the people of America will acknowledge their culpability and hold their government accountable?

Well, they have a candidate running for the leadership of the democratic party who will
be a very special president, and if they can't recognize that quality in barack Obama,
then they deserve another 'quack'. McCain is a good guy, but he is full of soldiering, and
will just carry on the doctrine of the bush presidency, that would be a crime.

Mar 21st, 2008
The shock and Awe comes in when you realize how many people have been killed and how much money has been spent.

The shock and Awe comes in when you realize how many people have been killed and how much money has been spent.

Mar 21st, 2008
iits the media i tells ya,there the ones whose not standing up and asking the questions that should be asked as in like why is there no links to iraq and 9/11/01 and why there were no iraqis on any of those planes that went into the twin towers,PA,or pentagon

And we still face a three trillion dollar bill for Bush's war. So far, the controlled right wing news media refuses to ask Bush and his fellow traitors as to how they plan on paying for their war.

Makes you wonder if Americans are just plain stupid.

Mar 22nd, 2008
I think they (Americans) are fully aware thev'e been duped, and from what i've read from the posts around here and other forums they are none too happy about it.

And does anyone believe for a moment that the people of America will acknowledge their culpability and hold their government accountable?

The American majority will lay blame, but they will probably blame the wrong people and not bother voting in the next election.

President George Bush Jr. will soon be irrelevant. Punishing someone for not knowing more than his telepromter told him would be pointless and diversionary.

Can anyone remember when the decision to invade Iraq was made?

WASHINGTON — Defense Department strategists are building a case for a massive bombing of Iraq as a new phase of President Bush's war against terrorism, congressional and Pentagon sources say. Proponents of attacking Iraq, spearheaded by Deputy Defense Secretary Paul Wolfowitz, are now arguing privately that still-elusive evidence linking Iraqi leader Saddam Hussein's regime to the terrorist attacks Sept. 11 is not necessary to trigger a military strike...

Americans should accept ultimate responsibility for their elected leaders. But its more likely a majority of Americans won't even vote in the next election.

Of those who do actually vote most may elect Pro-Iraq-war-hawk McCain.

Or almost as bad, Hillary Clinton:

Hillary Clinton: No regret on Iraq vote
April 21, 2004
'How could they have been so poorly prepared for the aftermath?'

...To the disappointment of some antiwar liberals in her Democratic base, Clinton, the former first lady, voted in favor of the Iraq war resolution in October 2002.
"Obviously, I've thought about that a lot in the months since," she said. "No, I don't regret giving the president authority because at the time it was in the context of weapons of mass destruction, grave threats to the United States, and clearly, Saddam Hussein had been a real problem for the international community for more than a decade."
But she said the Bush administration's short-circuiting of the U.N. weapons inspection process didn't permit "the inspectors to finish whatever task they could have accomplished to demonstrate one way or the other what was there."....

Of the three potential 2008 Presidents, only Barrack Obama voted against the Iraq war:

...Obama was an early opponent of Bush administration policies on Iraq.[112] On October 2, 2002, the day Bush and Congress agreed on the joint resolution authorizing the Iraq War,[113] Obama addressed the first high-profile Chicago anti-Iraq War rally in Federal Plaza,[114] saying:

I know that even a successful war against Iraq will require a US occupation of undetermined length, at undetermined cost, with undetermined consequences. I know that an invasion of Iraq without a clear rationale and without strong international support will only fan the flames of the Middle East, and encourage the worst, rather than best, impulses of the Arab world, and strengthen the recruitment arm of Al Qaeda. I am not opposed to all wars. I'm opposed to dumb wars.[115]...

Hopefully Obama will win 2008. But that's not certain.

Also this isn't just about the money or the corrupt political system. Its also about the people dying in this war:

But those are just cold statistics. Hardly newsworthy since few news services carried pictures of the awful reality.

More than one western reporter risked their life to communicate the carnage to the outside world:

Instead of those disturbing images, we saw "filtered and sanitized of death and destruction" images of guided smart bombs with cameras hitting their targets.

Even though they've stopped showing even those images, not much has changed... 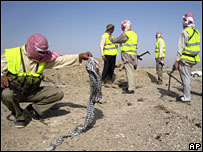 Nope, no bodies under here either...


As were the Germans by the Nazis, Italians and Spaniards by fascists, and Russians by communists. When people chose to allow their emotions rule rather than to have rationality prevail this is what inevitably happens.