Shaun the Sheep, star of Wallace and Gromit, to get his own show

Blackleaf
#1 Mar 5th, 2007
Shaun the Sheep returns with his own show

Shaun the Sheep, whose brief cameo stole the show in Aardman Animations' A Close Shave, gets his own show on CBBC1 (children's BBC)today  more than 11 years after his first appearance.

Nick Park, the Wallace and Gromit creator, with Shaun the Sheep

Viewers will discover that when no humans are looking, seemingly placid sheep get up to all sorts of shenanigans  including aerobics, camping, football and standing on each other's backs in perilously unsteady towers.

Nick Park, the Oscar-winning Wallace and Gromit animator, had the original idea for the sheep, but then passed the television project to the director Richard Goleszowski. Troublemaker: Shaun the Sheep with Gromit in Wallace and Gromit episode "A Close Shave" (1995)

"We decided that it wouldn't be Wallace and Gromit's world," said Park. "It's all based on the field that Shaun lives in, and his family of sheep.

The only human character is the farmer, who just murmurs."

None of the characters speaks  meaning that the gags will come entirely from what is seen on the screen.

"It's a real scriptwriting challenge," said Park. "How do you put across a story and feelings when your main character hasn't got a voice, and hasn't got any eyebrows either? At least Gromit had eyebrows."

But the lack of speech may explain Shaun the Sheep's international appeal  Aardman has already sold the show to 72 countries.

When A Close Shave was first shown in 1995, it won 10.5 million viewers  BBC2's biggest audience of that year.

"We are expecting the new show to do really well," said Park. "I've seen the trailers and I thought, 'Ooh, if I was a kid I'd be really excited now'."

Park is writing the script for a new Wallace and Gromit short, which he expects will be ready late next year. 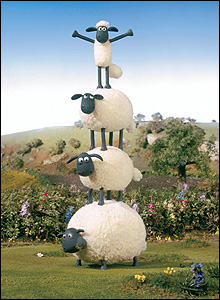 Back in the fold

Shaun the Sheep made his on-screen debut in the 1995 film A Close Shave, alongside plasticine heroes Wallace and Gromit.
His appearance may have only been four minutes long, but it was enough to endear the loveable sheep to the British public.
Now Shaun has his own TV show on BBC One - the first children's TV show by Aardman Animations since Morph. It starts on Monday 5 March at 1545 GMT on CBBC One. 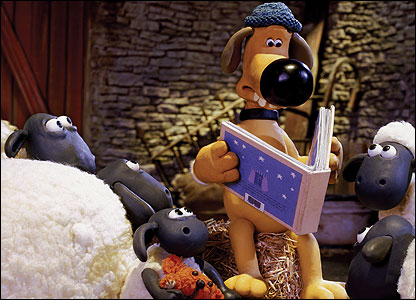 The 40-part series will follow the adventures of Shaun and the rest of his flock as they join in his latest madcap schemes.
They run riot on the farm, indulging in everything from synchronised swimming in the sheep-dip, to opening a disco in the barn.
Shauns friends include Shirley  a sheep who eats everything she sees  Bitzer the sheepdog, and adorable baby sheep Timmy. "Timmy was a favourite of everyone," said Chris Sadler, who worked as a director. "He will be a star." 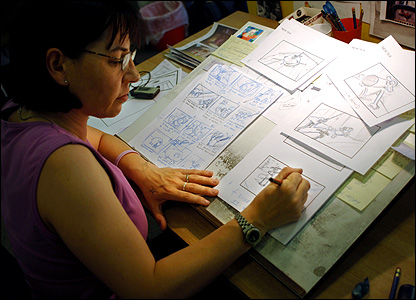 An episode of Shaun the Sheep series starts out simply as a germ of an idea.
But before the flock are let out of their fold, it is up to the team of scriptwiters to come up with a good tale.
Then the storyboard artists take over and transform the printed story into a visual one that the animators will work from. This stage also helps the set dressers, prop-makers, model-makers, riggers and cameramen know what is expected of them, and when to have things ready for shooting. 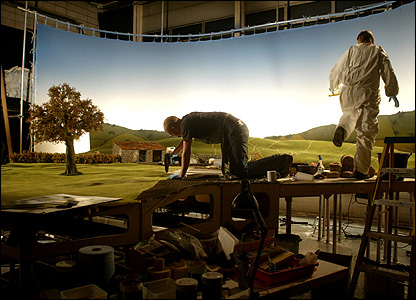 The farm's "grass" is simply felt bought from a hobby centre, painted green to get the right shade, with tufts of grass and daisies added.
It is also sprinkled with sheep "droppings" for effect.
The grass is then stretched over perforated steel, which gives the set a good base. Animators can then use magnets to keep the characters in place, and use the steel to attach the trees, farmhouse, barn and other parts of the set. 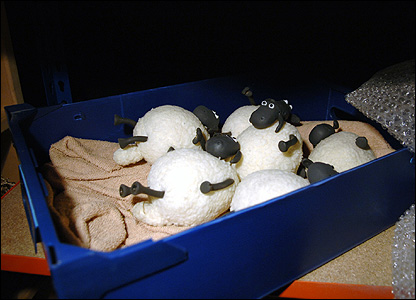 The model-makers create the sheep by first moulding their body into shape, then wrapping their bodies in white fleece.
The fleece is then dirtied a little and silicone legs are added. Finally the removable head is put in place ready for their big moment.
"We have a number of bodies, some on all four legs, and some on just two, depending on the scene," says Chris. "Then the animators make the sheep blink, smile, chew or whatever, using the selection of sheep mouths." 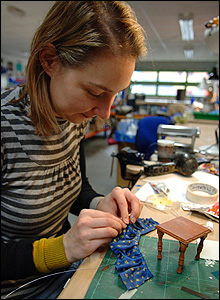 The prop-makers are called upon to make everything from sheep-sized beach towels, to bath toys for Timmy, and even a table for a magic scene.
Prop maker Helen Javes said: "Everything is made by hand, so it is very intricate.
"Even the table legs have been turned by hand to get the right shape." But the job of the prop-maker is not without risks. The slicing of fingers from sharp knives, and burns from hot glue are all in a day's work. 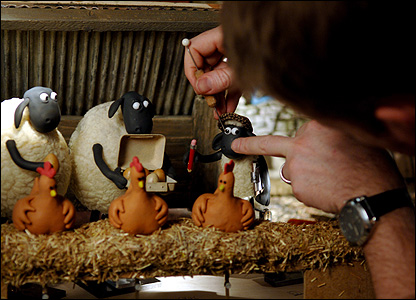 The sheep's eyes have tiny holes so they can be painstakingly manipulated to make them look left, right, up, down or just sheepish.
Each animator also has scores of specially-made eyelids  tiny pieces of purple dome-shaped plasticine that can be added to the eyeball make the sheep blink, or look sleepy.
Because the sheep do not talk, their expressions are used to tell the story or deliver a well-timed comedy moment. "Those eyelids are the bane of animators lives, laughs Chris. 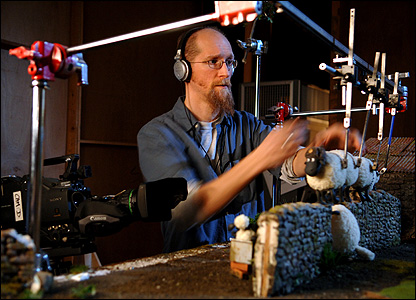 Many of the animators started working on Shaun the Sheep after finishing work on Wallace and Gromit: The Curse of the Were-Rabbit.
And there was also no rest for some of the characters from the Oscar-winning film either.
Some of the less recognisable characters appear in Shaun the Sheep, and in one scene can be spotted running away in terror from a take-away shop. And keep an eye out for some familiar vegetables too... 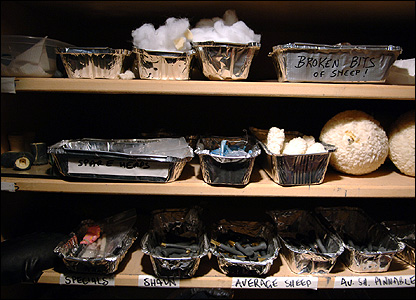 When not in use, the sheep - and bits of sheep - can be found stored in take-away boxes, and on shelves among the labyrinth of studios at Aardman.
It's here that animators can find a spare leg for Shaun, a bit of extra fleece, or even a broken sheep or two! 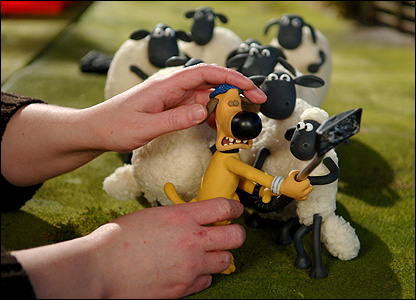 Bitzer the mongrel - consisting of "bits of this, bits of that" - was made yellow to give a good contrast to the sheep.
"Some of the characters are easier to animate than others, and Bitzer has never been popular," says Chris.
"He has to do a lot of physical things but isn't really the right shape to do them. He is made a silicone too and splits quite a lot!" Bitzer tries to keep the sheep in line, but even he can't help but get involved in some of Shaun's antics 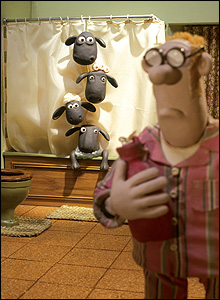 Apart from a few baas from Shaun and his friends, growls from sheepdog Bitzer and grunts from the Farmer, Shaun the sheep is a silent TV series.
But while Gromit had the voice of Wallace to keep the story going in their films, Shaun does not have that luxury.
Its easier to animate because lip-synching is one of the most time-consuming aspects for animators," says Chris. "But sometimes the stories just won't work without dialogue because the sheep end up being too hammy." 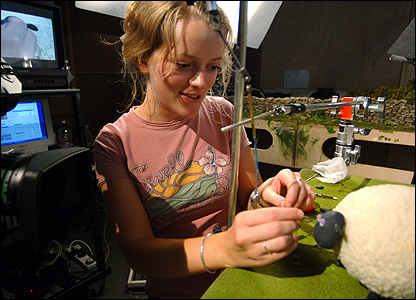 Characters in Shaun the Sheep move 25 times per second, meaning animators have to reset scenes 1,500 times for just one minute of footage.
They bag an average of seven seconds of footage a day.
While that may not sound like much, compared to Wallace and Gromit: The Curse of The Were-Rabbit and Chicken Run, they are working at breakneck speed. Wallace and Gromit averaged around three seconds of footage a day, while the animators on Chicken Run considered two a good day's work.