The water is muddied.

Crowdstrike stands by it's assessment and attributes 'Guccifer 2.0' to a disinformation campaign.

JUNE 15--An online vandal using the name Guccifer 2.0 has claimed credit for the recent hacking of the Democratic National Committees servers and has provided The Smoking Gun with documents stolen during the illegal operation, including a 237-page opposition research report on Donald Trump.

In an e-mail today, the hacker wrote, Hi. This is Guccifer 2.0 and this is me who hacked Democratic National Committee. Claiming that the incursion was easy, very easy, the hacker added that, Guccifer may have been the first one who penetrated Hillary Clinton's and other Democrats' mail servers. But he certainly wasn't the last. No wonder any other hacker could easily get access to the DNC's servers.

Attached to the e-mail were an assortment of DNC documents stolen by Guccifer 2.0, including donor lists (see below), internal memos, and the Trump report. Claiming to have been inside the DNC networks for more than a year, the hacker took credit for lifting thousands of files and mails, which he recently gave to Wikileaks.

Among the stolen material, the hacker claimed, were some secret documents from Hillary's PC she worked with as the Secretary of State. The material provided to TSG did not include these purported Hillary Clinton records.

The Trump report, dated December 19, 2015, is a comprehensive review of the presumptive Republican nominees business career, finances, and personal life.

The document opens with the assertion that, One thing is clear about Donald Trump, there is only one person he has ever looked out for and thats himself. Whether its American workers, the Republican Party, or his wives, Trumps only fidelity has been to himself and with that he has shown that he has no problem lying to the American people. Trump will say anything and do anything to get what he wants without regard for those he harms.

DNC officials yesterday acknowledged the breach, saying that a security firm traced the penetration back to Russian government hackers. According to The Washington Post, DNC officials claimed that no financial, donor or personal information appears to have been accessed or taken.

However, based on the documents sent to TSG, that contention appears inaccurate.

In response to e-mailed questions, the hacker--who wrote from a GMZ.us e-mail account--said, First I breached into mail boxes of a number of Democrats. And then using the info collected I got into Committee servers. Included in the pilfered material sent to Wikileaks, the hacker wrote, are election programs, strategies, plans against Reps, financial reports, etc.

Regarding the jailed hacker Guccifer--who recently pleaded guilty to federal felony charges--Guccifer 2.0 wrote that, I stand against Guccifer's conviction and extradition. I will continue Guccifer's business and will fight all those illuminati the way I can. They should set him free!!!!

In addition to providing documents to TSG, the hacker has uploaded some of the stolen material to a WordPress web site, which refers to the posted records as just a few docs from many thousands I extracted when hacking into DNCs network. 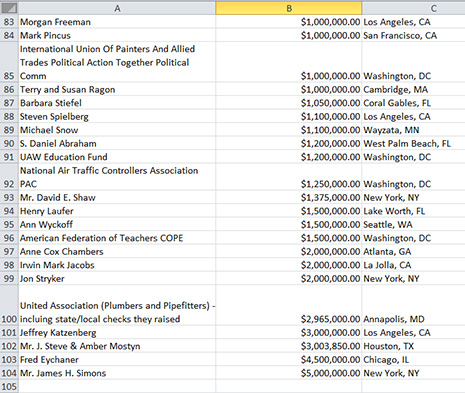 I suspect every one of Hillary's "deleted" emails will be released within a month or two, putting once and for all the lie that she didn't handle "marked" classified material or that there were no breaches.

The intelligence and State communities long ago assumed all messages to and from her server were compromised and have taken corrective action. How will she explain if it comes to light some serious damage, even injury or loss of life, due to her arrogance and stupidity. Right, that would be Trump's fault.

She put America's secrets up for grabs. Is more gun control the solution?